Singers of Song of Songs

From the Music Vault Dept.: Checking in with an earlier recording by the dynamic choral ensemble Stile Antico. The term refers to a Baroque-era style of composition harkening back to the Renaissance; the ensemble has covered that era as well as material older and new.

WHEN A RECORDING OF CENTURIES-OLD CHORAL MUSIC tops the classical charts in this country, it’s news. The last time I remember this happening, it was the freak success of a set of Gregorian chants. Now it’s a collection of songs from the Renaissance inspired by the Songs of Solomon. And they’re sung by a leaderless ensemble that informs every phrase with a richness and intensity that makes you wonder why such songs aren’t always sung this way. 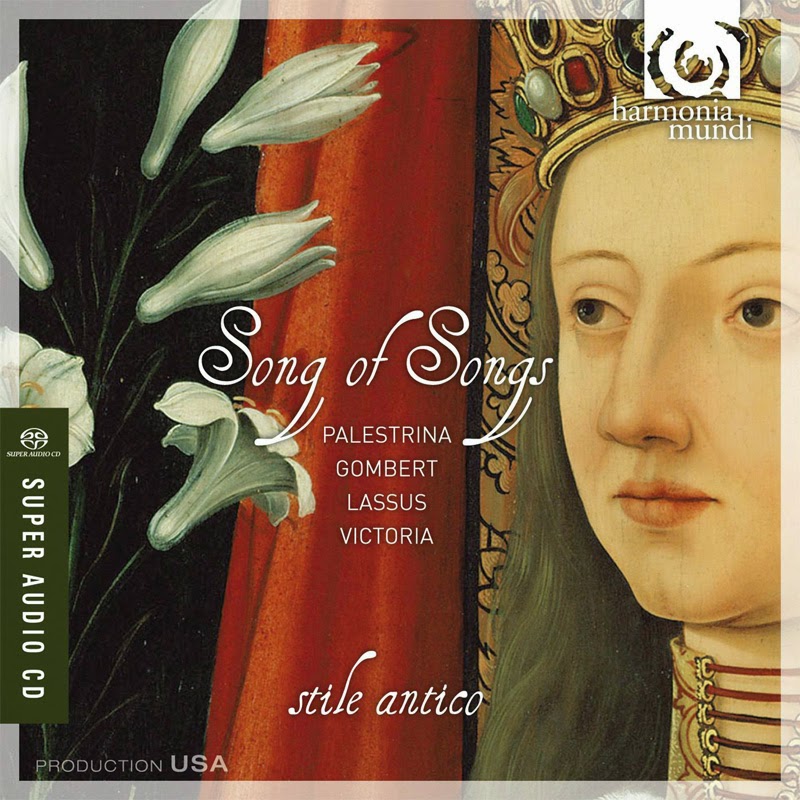 There’s no easy answer for that. Why were Toscanini’s orchestras so galvanized, in a way no other conductor could summon? What make Horowitz’s phrasing seem so fresh and right? The most brilliant performers serve not merely as conduits for the tunes behind the notes, but also as interpretive carburetors, adding sparks to what’s taken in so as to ignite the result. Not with bombast, but with a confident understanding of the heart of a song.

This UK-based ensemble comprises a dozen or so singers not out of their twenties, whose previous two recordings already showed their knack for imaginative programming and faultless singing. Here, they’ve trumped even those superior efforts.

Listen to Palestrina’s “Osculetur me,” a setting of a passionate text that may sound old-fashioned to our jazz-tempered ears, but which in this performance “pops” as each voice enters. That is, you’re aware of each new voice as something new and bold and maybe, if you allow yourself truly to be drawn in, a little frightening.

But listen also to the skillful programming of the recording, something you’ll experience as a cumulative thing, Big names like Palestrina, Lassus and Victoria are sprinkled among a roster that softens the mood with a plainchant every few tracks.

As a program notes buff, I was delighted by the amount of insight provided by bass-singer Matthew O'Donovan’s well-written essay, offering a shrewd perspective on the religious perspectives that inspired the variety of compositional approach.

May I ask a favor? Once you get this disc, and before it takes up residence as another shuffle candidate in your iPod – could you play it on a decent stereo system in a room where you can sit quietly and listen? Don’t consign it to the background noise of your life too quickly: This is music that reminds us of music’s emotional, druglike power, but it’s also music of a very subtle dosage. Take a full 78 minutes’ worth, then try not to operate heavy machinery too soon thereafter.