Back to the Books Dept.: Another of the book reviews I’ve written over the years, allowing another look at what’s otherwise an unfortunately transient enterprise. At least until my collected reviews are published in book form, delaying their obscurity for a little while.

I HAVE AN UNCLE who gets nervous at the sight of what he calls “small books.” He wants to prop the latest fat Michener opus on his knee and feels slighted if he hasn't got several hundred pages of soul-stirring adjectives parading before him. 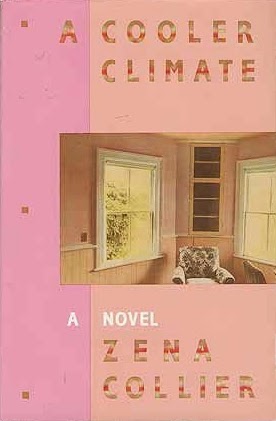 But a novel like Zena Collier’s A Cooler Climate could change his attitude. It’s a mere slip of a book, but it demands that you look at it closely so as not to miss the delicate scrollwork.

It’s her first published novel, for what that’s worth – she has lots of other published material to her credit. So don’t be surprised by the journeyman technique. Special skill is required to create the characters and atmosphere in this novel, because it’s done with strokes so deft you hardly notice how quickly the narrative power builds as you read it.

The story recounts an awkward but ever more common situation: Iris Prue, 45, is divorced, alienated from her only child, and lacking the skills to enter a job market she never thought she’d need access to.

A shrewd eye for class structure informs the work as we follow Iris, who narrates the story, into a position as housekeeper for Paula and Leo Tanner, taking care of their summer place in Maine. Leo is an entertainment attorney who works in Manhattan, putting in a lot of time in the city while bossy Paula attends to their vacation home.

Lines are drawn immediately, some of them parallel: Paula is quick to establish her superiority, but Iris senses her employer’s own problems with husband and daughter.

At the same time, it’s clear that Iris is a class-notch above that expected from a housekeeper. She carries herself too well, speaks too intelligently, knows too much about music and art. Like Paula, she’s very lonely:


Lying on the beach later in my swimsuit, all visible parts of me oiled, I surveyed the prospect around me. Although the season hadn’t officially started, there were quite a few people. Surely there must be some way to strike up an acquaintance? Perhaps if I sat up, I’d appear more accessible. I sat, glancing around hopefully, but no one approached to exchange amenities. No one even glanced in my direction. Should I move closer to someone? My chances would probably be better with a single or group than a twosome ...

The writing is elegant, sentences falling in a measured rhythm that propels the story with subtle energy. And the language is precise: witness the correct usage of the word “hopefully,” otherwise slaughtered by writers and speakers alike.

Best of all, the story becomes more and more compelling as the characters – Iris and Paula in particular – reveal more complicated personalities, drawing you toward its inevitable, surprising conclusion. You’ll find yourself savoring the flavor of the novel long after you’ve set it down that final time.

Collier requires you do some of the work that fussier, more prolix writers do for you: not all relationships are spelled out, but, like Iris, you can make some good guesses. And, while the finish doesn’t wrap all of the action up like a holiday package, the story is complete. It’s enough.

This is a model novel for character development; it also shows just how effective lean, intelligent writing can be.