From the Slush Pile Dept.: Here’s a book review I wrote for Metroland, but it seems never to have run. So here’s its debut. The book was turned into a not-well-received movie and, indeed, it seems that Jonathan Tropper has abandoned the novelist’s life for Hollywood. He created and produces the Cinemax series “Banshee,” and he’s developing someone else’s book for Steve Carell. But this book and Tropper’s five other novels are well worth pursuing.

JONATHAN TROPPER’S NOVELS are often compared to those of Nick Hornby, which has its merit: Tropper’s protagonists, invariably male, typically suffer a hilarious series of emotional and physical torments en route to a resolution in which sheer peace is a desirable component. 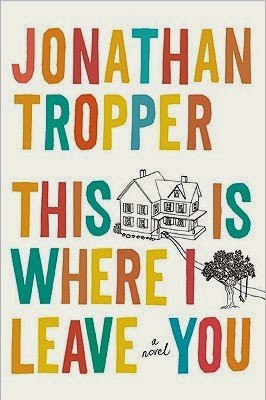 But this only goes to show the lack of contemporary comic-novel referents. Hornsby’s work tends to be arch and, in the case of characterizations, overly facile; Tropper’s tropes are drawn from the unique social phenomenon known as the suburbs, in particular those north of Manhattan.

Which places Tropper’s five [now six] hilarious novels more in alignment with that of Peter De Vries, whose novels from the 1960s and 70s chronicled the ironies and discomforts of the Fairfield County set. And, like De Vries, Tropper revels in the well-crafted phrase. His latest novel, This Is Where I Leave You, succeeds in an unlikely blend of the fantastic and mundane, always in the service of humor.

Tropper’s novels are always funny, but he’s lately developed a more easygoing lilt to his dialogue and descriptions, as in the following portion of the six pages of interior monologue that Judd Foxman sounds when beholding his wife, Jen, in bed with his boss:

“...when you get right down to it, sex is a messy, gritty, often grotesque business to behold: the hairs, the abraded, dimpled flesh; the wide-open orifices; the exposed, glistening organs. And the violence of the coupling itself, primitive and elemental, reminding us that we’re all just dumb animals clinging to our spot on the food chain, eating, sleeping, and fucking as much as possible before something bigger comes along and devours us.”

The dilemma of the suburbs is the price demanded for the assumed luxury. It’s not just your house and attendant taxes. It’s the cost of trying to belong to a society less welcoming than it seems, imposing unspoken expectations of conformity.

Adding to Foxman’s marital woe is his father’s sudden death, and the framework of the novel becomes his mother’s demand that the children – Judd has a brother and sister – sit shiva. What ensues are seven days in which the family’s relationships with one another, including spouses and kids, unravel against a context of visiting mourners and past memories

“Death is exhausting. Whether it’s from the trauma of burying my father or from spending the entire day in close proximity to my family, I barely have the energy to take off my pants before collapsing on the mostly opened sofa bed, my legs tilted upward toward the Ping-Pong table. There, beneath the house, in the oblong shadow cast by the single naked lightbulb, I can feel the panic rising, the sense that I’m disappearing. A few miles away, my father is buried in a grassy bluff overlooking the tangle of blacktop where the interstate and thruway intersect. We are both underground, gone from the world. At least his legs are fully extended.”

As those old memories are reawakened, so too is long-dormant desire. Penny, for example, whom Judd hasn’t seen in eight years, and who seems riper now than in her prom-queen days. Judd’s halting pursuit of her is countered by the revelations that emerge as his marriage continues to unravel.

But the story is an ensemble piece, with all of the lead characters drawn distinctively. And believably enough to make credible the amusing skirmishes that ensue, character-driven problems that will resonate with anyone who’s dealt with a ne’er-do-well brother.

In this case, the peripatetic Phillip, who arrives in a Porsche with a rich almost-fiancée and reignites his contentious relationship with brother Paul. All of this under the enlightened eye of their mother, “a sixty-three-year-old best-selling author with a Ph.D. in clinical psychology and Pamela Anderson’s breasts, who talks about fucking her late husband like she’s discussing current events.”

Tropper’s greatest strength in this novel is his ability to spin out incredible (and hilarious) consequences to actions performed in jealousy and anger even while keeping us aware that there’s an undercurrent of love in this family. While Judd’s relationship with brother Paul is given a too-pat resolution, the situations with Penny and Jen are messier and are left in more plausible places.

At the same time, the book is a great cartoon, with outsized fistfights, old-movie romantic scenes and even a new twist on the old pie-in-the-face. The laughs are well paced and easily carry through to a satisfyingly ambiguous conclusion. Soon enough, I’m sure we’ll have Tropper-esque as lit-style adjective.


This Is Where I Leave You
By Jonathan Tropper (Dutton)