Justify Tea in a Just World

Comforting Cozy Dept.: This week’s Metroland is the annual Mind, Body, and Health issue. I wrote about my cure-all: tea.

MARGUERITE GAUTIER SPORTED A WHITE CAMELLIA when she was available to lease her love and a red one when she wasn’t. The heroine of Dumas’ Lady of the Camellias put these lovely blooms to use even as she wasted away from tuberculosis. I’m not saying that the more typical use of the camellia cousin would have revived her, but at least it could have perked up some of those lonely, red-bloom afternoons. 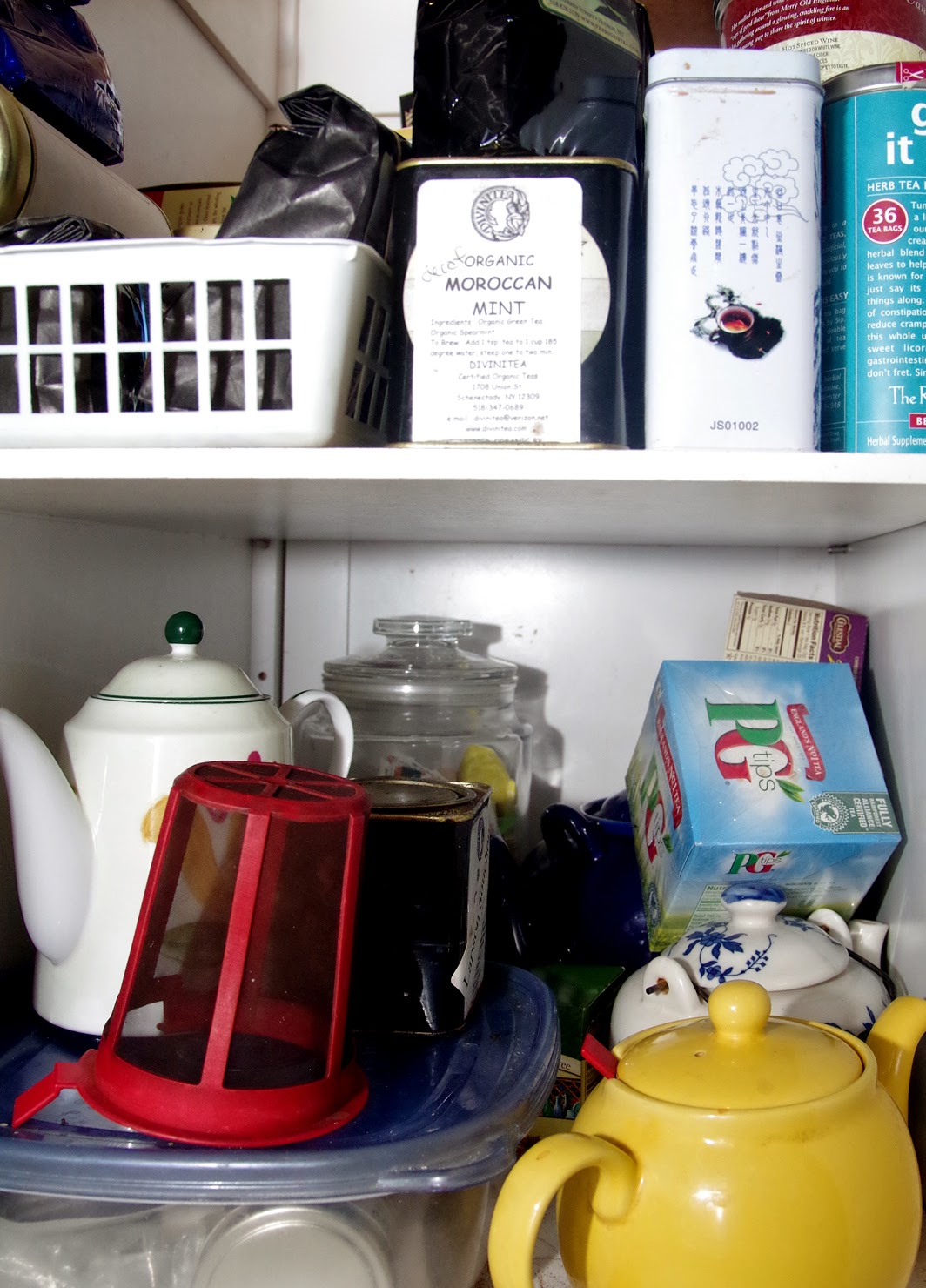 The non-ornamental species Camellia sinensis gives us the six classes of traditional tea: white, green, yellow, black, oolong and dark. These plants aren’t allowed to bloom in order to strengthen the leaves, and the best of them are grown in China, Japan, India, Sri Lanka and Taiwan.

According to the Tea Association of the USA, tea “is the most widely consumed beverage in the world next to water, and can be found in almost 80 percent of all U.S. households. ... On any given day, over 158 million Americans are drinking tea.” Ninety percent of it is brewed from bags, reconstituted from iced tea mixes or swigged from bottles; the Tea Association goes on to lump loose tea and instant tea into the remaining ten percent, which are about as opposite as can be but probably give an illusion of more popularity to the loose stuff.

“I have very little patience with tea bags and highly recommend that anyone who enjoys good tea learns how to steep it from loose leaves,” writes Tomislav Podreka in serendipitea, a small, sweet volume of musings and history. “The handy little sacks usually hold inferior tea, either tea leaf dust or fannings, which result in weak, rather bland-tasting tea.”

Very few restaurants have any clue about tea and its proper service. Sending out a cup of rapidly cooling water and a sack of floor-sweepings is a hilariously inappropriate way to invite a customer to end a meal, yet it’s what most of us expect.

The transition to loose tea can be almost traumatic as you learn how the stuff really tastes, and it ain’t like Lipton’s. Real tea (by which, of course, I mean loose tea) has subtle shadings of flavor. It comforts; it can pack a kick. Varieties abound.

“Tea began as a medicine and grew into a beverage.” That’s the opening of Okakura Kakuzo’s The Book of Tea, written in 1906 to be read aloud at Isabella Stewart Gardner’s Boston salon. The Tokyo-born Kakuzo, who learned English from infancy, worked at the Boston Museum of Fine Arts early in the last century. His book famously married tea and philosophy by introducing us to “teaism ... a cult founded on the adoration of the beautiful among the sordid facts of everyday existence.” So gentle and inspirational is this brief book that you’ll want to treat yourself to an excellent cup. Finding your first few ounces of loose tea (Hail, gentle Darjeeling! Ave, perky Assam!) should be done in person.

The best purveyors aren’t to be found in shopping malls. You need a maven to guide you, and the best in this area is Linda Smith, who, when she’s not making the rounds of restaurants and events, can be found in DiviniTea, her retail store at 1708 Union St., Schenectady. “I’ve been making tea for most of my life,” she says. “Even as a kid I was always pulling things out of my mother’s garden to see what kind of tea they’d make. Eventually I started blending tea to suit requests. Even now, I do all the blending of the tea I sell.” You can also explore her stock and buy product at her website, divinitea.com.

The price of loose tea may come as a surprise, especially if you’re used to buying the bagged stuff. But it’s still economical: at $40 for a pound of loose tea, you’re paying only 20 cents per cup. When you’re ready to plunge into an exhaustive study, find a copy of The Story of Tea by Mary Lou Heiss and Robert J. Heiss, which, after offering a 250-pages on tea’s history and geography, rewards you with an encyclopedic tour of the major styles, with photos of both leaf and brew. Purveyors themselves (they have a retail store in Northampton, MA, and online sales at teatrekker.com), they go so far as to visit the tea-growing estates to select product. Their book goes on to tell us, “Tai chi, tango, and tea brewing are studied but never mastered.”

But it’s worth a try. Water should be delicious going onto the heat, and warmed to between 170 and 200 degrees F, depending on the leaf, with white tea seeking the lower temp, going up through green and oolong to the black tea, which needs a near-boil. The Heisses look with horror at the practice of crushing tea leaves into balls and other forms of containment, and recommend brewing it in one pot and straining it into another. Each type of tea has its own steeping time, usually provided upon purchase, easily discovered online – where you’ll also find apps that will select the time for you and notify you when it’s ready. And I guarantee that there are fanatics aplenty who will passionately dispute everything I’ve just told you. You can shut such people up by insisting on having milk with your tea.

If you’re drinking the brew of some other plant, “These beverages are properly called herbal infusions or tisanes but never teas,” writes Lisa Boalt Richardson in her excellent, exhaustive book Modern Tea. “Among the best-known infusions are mint, chamomile, and hibiscus. A nutty-flavored, burnt-red infusion made from the needlelike leaves of the rooibos bush is arguably the most fashionable tisane at the moment.”

The finest book ever written about this subject is by one of this country’s finest and most-forgotten essayists, Philadelphia-based Agnes Repplier. To Think of Tea, published in 1932, explains better than anyone else what makes a good brew so special:

“It is the moderate exhilaration induced by tea which makes it such a boon. We may, as Dr. Johnson asserts, be happy when we are drunk; but we are tolerably sure to be unhappy afterwards. The sense of contentment which follows the second cup of tea is not so irresponsible as to defy experience. It is a contentment compatible with ordinary circumstances. It does not lift us so high that the fall hurts, nor shelter us so securely that the return to noise and glare is shocking. For most of us life holds no good years, and few good days; but multitudinous good minutes if we recognize their presence. ‘Après tout c’est un monde passable.’”