WE HEAR THE PEDAL C from the organ, a note echoed by contrabass and contrabassoon, and then the trumpets ascend with the I-V-I of the triad, immediately slapped down with a one-two punch from the full orchestra that lands us unexpectedly on a C-minor chord. The insistent tympani invite it again – this time, the trumpets-to-orchestra sequence gives us C major. Once more, more triumphantly still, and F chord takes us to the stratosphere, like a firework rocket grabbing the sky and exploding into a shower of descending C major arpeggios. Or, to put it in more recognizable terms, it’s the opening music to “2001: A Space Odyssey.” 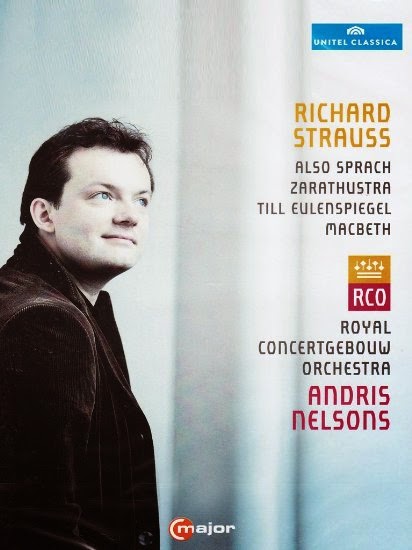 Richard Strauss wrote “Also Sprach Zarathustra” in 1896, inspired by Nietzsche’s philosophical novel proposing an eternal recurrence of things even as man progresses to a state of oneness with the earth. And it’s filled with a glory of orchestral sound well beyond the “Sunrise” opening, a beautiful example of Strauss’s ability to tell a highly programmatic story in a language that needs no story for its effect.

Andris Nelsons is the fast-rising conductor in the midst of his first season as the Boston Symphony’s music director. A Strauss devotee, he confidently has conducted that composer’s music with the Royal Concertgebouw Orchestra, an ensemble Strauss himself has led – and three of those pieces are on a new DVD that shows us both what a dynamic conductor we’re dealing with and how it is Strauss achieves the unique voice that makes his work so easy to identify.

Of course, it helps to have a tech crew entirely on top of the score. We see what makes the most sense as the cameras pick their way through the pieces. Take the section titled “Of Science and Learning,” which starts about 13 minutes into the piece. Cellos and basses start it off with rising and falling three-note figures reminiscent of the opening, and then it goes into the unlikeliest of fugues, the low-string sections subdividing like paramecia. A slow pan across the cello section shows you entrance after entrance, the sound gently swelling.

By the time the woodwinds enter, the strings (now joined by violins and violas) are in thirteen parts, and the first violins have yet to come in. Incredible shadings of timbre occur as the mixture of instruments grows and sweetens. The cameras pick out solo voices, busy sections, then settles for a panorama of ensemble and hall as the moment peaks. Being Strauss, being mystical, that three-note I-V-I leads us into chamber-music intimacy, a succession of woodwinds mocking the motif, until we’re led to the next section, “Convalescence.”

You’ve always told yourself you wanted to get to know the rest of this piece. Here’s an excellent way to do so.

And there’s more. “Macbeth” was the first of Strauss tone poems, rapidly outshone by its successors. Even as it too-revealingly shows the composer’s debt to Beethoven, it evokes a compelling succession of moods, and again is faultlessly played.

But we end on a lighter note. “Till Eulenspiegel’s Merry Pranks” (written just before “Zarathustra”) is one of Strauss’s most high-spirited works, capturing as it does the story of an old German folk hero who got into enough trouble to end up on the gallows. The piece contains a famous French-horn theme that, according to classical-music folklore, the composer heard the principal horn of the Weimar Orchestra using as a practice figure. When, at the first “Till” rehearsal, the horn player complained about the theme’s difficulty, Strauss admonished him by pointing out that he’d heard the man playing it only that morning.

In any event, the short, giddy piece is another that benefits from the close looks at conductor and players this video affords, proof both of Strauss’s genius and of Nelsons’ deserved success. Detail on the Blu-ray version is spectacular, and the audio quality makes excellent use of a surround-sound system.