IT’S A CINEMATIC SPECTACLE, the kind of theatrical event usually reserved for Cameron Mackintosh-style musical extravaganzas, last seen on the Proctors mainstage in the mammoth Les Miz. But this time it wasn’t a musical—although there’s plenty of music—and the main character was a horse. 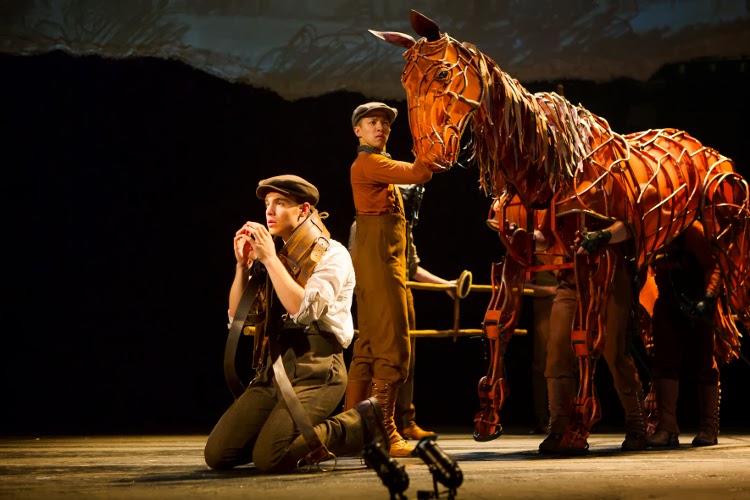 That’s not strictly correct. The main character is war, World War I, to be exact, but the horrors of such an event transcend any one in particular.

Adapted from Michael Morpurgo’s 1982 children’s novel, War Horse views events through the surprisingly animate eyes of Joey, a draft-horse-thoroughbred mix ill-suited for farm work in Devon, where he is raised, but who proves an admirable mount for a British officer battling his way across France.

This is a war of technological changes, however, and the cavalry charge is no match for automatic weapons. Joey’s fortunes soon change. He is pressed into service for the German side hauling an ambulance; eventually he is put to hauling heavy equipment. During all of this time he is sought by Albert (Michael Wyatt Cox), the boy who raised him and who eventually makes his own way to the battlefields.

The play is a stunning multimedia event, making superb use not only of the stage itself but also of animated graphics on the torn page of a screen that hangs over the proscenium, music that is played and sung (and prerecorded), the inevitable smoke and lighting effects—and the justly acclaimed puppetry (by Adrian Kohler and Basil Jones) that brings to life not only horses but also several birds and a particularly aggressive goose.

Each mature horse is inhabited by three people, one of whom works the head from outside the body, all of whom participate in equine vocalizations. So many parts of each horse’s anatomy are given movement that an amazingly accurate simulacrum is achieved, but beyond that is the clever use of anthropomorphic movements, giving the animals—Joey, particularly—a few human reactions, making the characters all the more sympathetic.

When Albert’s father, Ted (played with hard-hearted splendor by the versatile Gene Gillette), attempts to whip Joey into submission, we can’t help but hope that Ted might suffer some horrible fate—which makes us all the more emotionally vulnerable to the war horrors we’ll son witness.

For all of its sprawling grandeur, the story is economically told, with well-crafted setups that we anticipate will pay off tellingly, such as the owl call with which Albert trains Joey, and the knife that’s given to Albert’s cousin, Billy (David Hurwitz).

The startling technology that brings the War Horse puppets to life is really a showcase for human ingenuity, speaking to an audience eager to believe in the magic of an effective story and given the freedom to do so in the confines of a theater. It offers a compelling contrast to the technology of the war that’s depicted, which is a showcase for human greed and venality, and speaks to people able to blind themselves to the horrors by emotionally insulating themselves with jingoistic conceit. The sight and sound of a brass band marching onto the stage is a key ingredient to the play of emotional manipulation that War Horse deftly achieves, just as the folk songs give a melancholy tug.

One in particular, “Only Remembered,” is a 19th-century hymn with Scottish roots to which John Tams (credited as the play’s “songmaker”) added some lyrics. When we first hear it, in the first act, it seems wistful; when it closes the play, it’s tragic.

Adrian Sutton composed a cinematic set of cues for the show that since have been fashioned into a concert suite, and deserve a life apart from the play. (One of the reasons I have avoided Steven Spielberg’s film version of this story is that it sports a score by John Williams, whose overblown ramblings grate on my ears.)

Even with many cast doublings, this is a huge show, with huge production values. That the houses were filled throughout the Proctors run is a testament to the power of a theatrical event, able to touch an audience in ways no movie can hope to approach. It’s a far more expensive ticket, to be sure, but it’s paying a living wage to theater professionals who only can appear in one theater at a time. I don’t doubt that all with whom I shared the theater last Friday were uniquely moved by the experience. We need to be in the seats for more such events.