From the Audio File Dept.: A couple more vintage CD reviews, this time of significant music written for films.

“RECOGNIZE THIS?” I asked my wife as the King Kong score played in the background. Crashing, ominous chords signalled the “Aboriginal Sacrificial Dance” sequence. “It’s from a movie,” she said. “Something pretty scary.” 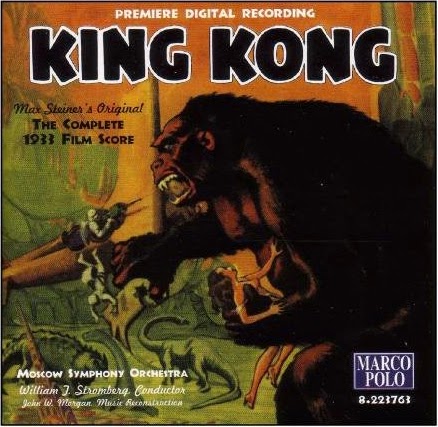 Sixty-five years later, the score, even when shorn of its film, still packs a punch that excites the imaginations. This recording presents a full reconstruction of all the music Max Steiner wrote for the 1933 epic. It’s not, as recording supervisor John Morgan points out in the detailed notes, a recreation of what’s on the soundtrack, but rather an exciting performance of the score by a good-sized orchestra–larger than what Steiner used for the original, but one that suits his ambition, as evidenced by the orchestration.

You don’t have to be familiar with the film to enjoy the music–it’s stirring in its own right, full of contrast and surprise. If you do remember the movie, you’ll be all the more delighted by the images the music prompts.

Like most film composers, Bernard Herrmann owed a debt to Steiner’s innovations. But Herrmann carried those innovations further, weaving complex counterpoints of music to onscreen action. Whether writing for movies by Hitchcock or Orson Welles, Herrmann brought a distinctive style to his sound. With Garden of Evil, a wide-screen Technicolor Gary Cooper western, Herrmann used his Hitchcockian technique of establishing a brief, idiosyncratic figure that urges on all of the subsequent action. And it’s probably not spoiling things to observe that the music ultimately is better than the movie. Play the CD and make up your own plot and it’ll no doubt be better. 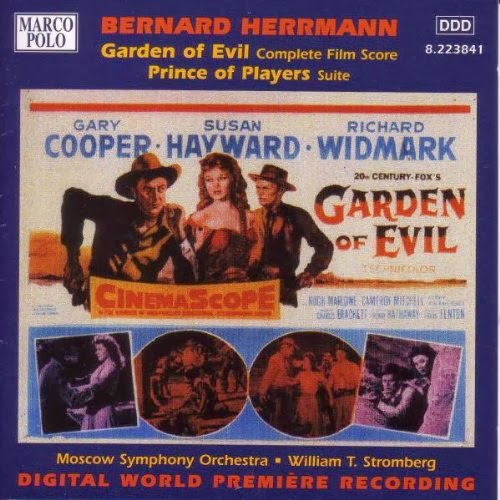 We also get a bonus of eleven minutes of Herrmann’s music for Prince of Players, a short suite drawn from the title music and a few key scenes in the 1954 bio of actor Edwin Booth. Booth was known for his Shakespeare, and those scenes in the movie had no musical scoring, which probably was a good artistic decision. There remains a Shakespearean feel about what music there is, however, surprisingly similar to what William Walton evoked in his music for Laurence Olivier’s Shakespeare films.

Movie music is, at long last, enjoying its own legitimacy as part of this century’s classical music, and the Marco Polo series is an important contribution to that genre.