From the Vault Dept.: Here’s a review I wrote for Metroland, but which never seems to have gotten published. So I share it with you, only noting that the set described here is long out of print, and the lowest price for a used copy on Amazon.com is $125. I might be tempted to part with my copy for a little less than that . . .

ALTHOUGH HIS CURRENT REPUTATION may be overshadowed by a coeval generation of Russians, Belgian violinist Arthus Grumiaux could easily be mistaken for one of them when he’s surging to a big moment in one of the big concertos. He had a rich but cheerful sound that served him well in the warhorses, but this collection focuses on his more intimate side – the featured attraction being all five of Mozart’s concertos (and a spurious one). 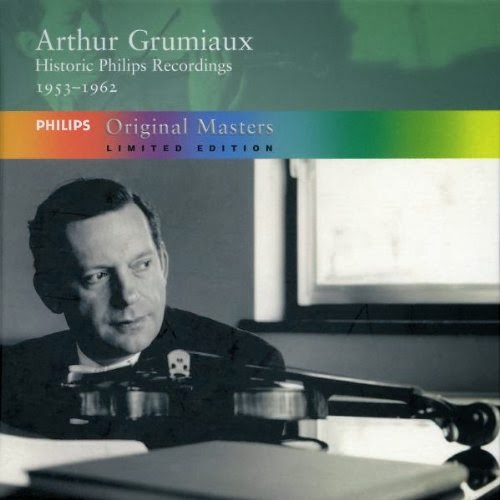 Grumiaux won an international reputation with his interpretation of Mozart’s Concerto No. 3 in G Major, and it’s here in a 1953 recording with the Vienna Symphony; the others, waxed with the same orchestra, range from that year through 1955. Which means that they’re in mono, but so is most of the collection. Don’t let that dismay you: the sound quality, typical of Philips in that era, is superb.

These recordings also date from a time when the violinist was the star, so the recording balance tends to put him out front. But it’s not as egregious as it might be. Compare Grumiaux’s 1962 version of Fauré’s sonata with the Heifetz version, recorded a few years earlier, in which the piano almost disappears into the background. And the Fauré sonata, an unjustly neglected piece, showcases all that’s wonderful about Grumiaux’s sound and interpretive style, its heroic declamations just as convincing as its moments of sweetness.

Included also are a wealth of pieces by French composers, works that also came to be associated with the violinist. Sonatas by Debussy and Ravel, Lalo’s “Symphonie Espagnole” (in its four-movement form), and shorter works by Chausson and Saint-Saëns are included.

For fireworks, Ravel’s “Tzigane” gets its due in a 1954 recording. Grumiaux, like Ginette Neveux, plays up the gypsy feel of the piece for a witty and fleet-fingered result.

Grumiaux was the first to perform Paganini’s Concerto No. 4 in the present era, and his 1954 recording of the piece is a testament to the sheer virtuosity of Grumiaux’s playing, with additional Paganiniana (“I Palpiti,” “Le Streghe”) for good measure.

Although they’re narrowly focused in terms of recording dates and repertory, the five CDs in this set are a splendid tribute to a major violinist. In this era of so many sound-alike fiddlers, Grumiaux’s unique voice more than ever needs to be heard.