Be Seeing You, or Where are the New Blog Posts?

“BUT YOU KNOW it’s going to end the same way again!” my father would complain. “His face comes at the screen and the bars close across it!”

I don’t think Patrick McGoohan’s TV series “The Prisoner,” which aired in the U.S. on CBS in 1968, effectively spoke to him. But I, a disaffected 12-year-old, found incredible resonance in each maddening, enigmatic episode. McGoohan’s Number Six fought the oppressive bureaucracy of The Village, a colorful seaside resort where you’d expect to find M. Hulot but instead were surrounded by a population in which you couldn’t tell the fellow-prisoners from the warders. 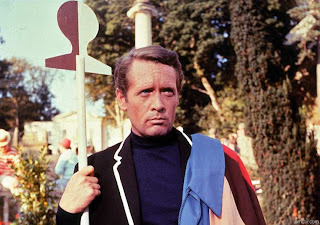 Sixteen of the series’s seventeen episodes aired that summer, omitting one with an American Western setting that the censors insisted cut too close to the political bone (this was, after all, still the era of J. Edgar Hoover).

But the series still included a fascinating attempt to uncover Number Six’s secret – why he resigned from what we assume was a secret service job – by manipulating his dreams (“A, B, and C”), a fantastically clever episode in which Number Six is led to believe he’s another agent brought to The Village to confound Number Six (“Schizoid Man”), a compelling use of Bizet’s “L’Arlesienne” Suite, among other tools, to drive the Village leader, Number Two, crazy (“Hammer into Anvil”), and a fairy-tale chase in which Number Six is led by a Mystery Woman into a booby-trapped nursery rhyme-themed village (“The Girl Who Was Death”).

In each of these, McGoohan’s square-jawed, resolute character was tested; a fistfight probably took place; literate badinage with Number Two would be carried out – and at the end his face would come at the screen and bars closed across it. It felt like the rigors of childhood, acted out on a larger scale.

But with the last two episodes, “Once upon a Time” and “Fall Out,” the tone changed. “Once upon a Time” brought back the always-splendid Leo McKern as Number Two, in a fiendish one-on-one with Number Six that involved psychological regression in an effort to gain Number Six’s trust. A plan which backfired, of course, with disastrous results. “What do you want?” asks Supervisor Peter Swanwick at the end of it. “Number One,” says Number Six. And he’s led away as we were left to wait for a week for the conclusion.

When “Fall Out” aired in Britain, it crashed the switchboard at ITV. People were puzzled and irate. There’s never been a television episode like it. It was written and directed by McGoohan, but Kenneth Griffith, as The President, was asked to write his own dialogue, probably because everything was done under severe time constraints. In a rare (at the time) show of generosity, the Beatles allowed “All You Need Is Love” to be used with the episode. If Number Six gains freedom at the end of the show (and series), it’s at a heavy price and with great ambiguity. I couldn’t have been happier with the confusion of the piece – it’s thickly layered, like an Ives symphony.

“Be seeing you” are the traditional words of parting in The Village, delivered with a salute in which thumb and forefinger are circled. It’s an ironic gesture, one that seemed appropriate to use while imprisoned in school. And I have friends from back then who still exchange those words with me. By now, we’re all trapped wherever we are.

I haven’t found the rigors of providing daily updates to this blog too oppressive – I have plenty of material to draw from – but it’s going to pause for a while. Tomorrow I go in for surgery to repair a torn biceps tendon, and I’m not sure when my left hand will be available again for typing. So I’d just as soon take some time off, which also explains why you’ll see little in the way of Metroland contributions from me for a couple of weeks. I suspect it will be movies and painkillers for me for a while. Be seeing you.
Posted by B. A. Nilsson at 10:04 PM

Good luck and fast healing to you.

Take care Byron, and heal that pesky arm as fast as you can. Folks will want to be seeing you in all the old familiar places...

Very good blog post. I certainly love this site.
Keep it up!