MY FAMILY MOVED from New Jersey to Connecticut when I was seven, placing this scared second-grader in a big, unfamiliar school. Which decided to combat my classroom boredom, just as I was starting to make some friends, by skipping me into third grade. A feature of the new academic calendar was a twice-weekly trip to a windowless room where Edmond Finaldi taught music, possibly the most thankless of all academic challenges. 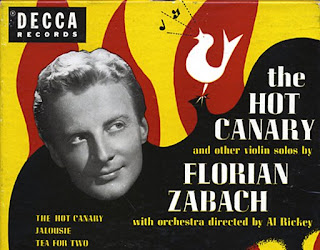 It was dull, complicated stuff, much at odds with the pop tunes in which I and my coevals were bathed, but Mr. Finaldi had a routine with which the other kids already were familiar: at the end of each class, he’d click open his violin case and play something. The favorite was Paul Nero’s novelty “The Hot Canary.”

I had no idea a musical instrument was capable of such thrilling sounds. My live-music experience before this consisted mainly of hearing my father play “Für Elise” and “Rondo alla Turca” on the piano. The violin sang far more thrillingly, especially when Mr. Finaldi swept a finger high up on the E string to sound the twittering harmonics of the canary’s voice. I was mesmerized. I couldn’t get enough of it.

The following school year, we were offered musical instrument training. I chose the violin. On the first day of lessons, I joined fifty other kids in the orchestra room where fifty rented violin cases waited. “Don’t open them,” said the harried young woman in charge of us, and fifty kids ignored her and flipped open a hundred latches and scraped fifty flabby bows over two hundred untuned strings. When she got us settled and tuned and scratching the A string, we realized that this thing was work. All traces of exoticism vanished.

And so, by the second lesson, did half of those fifty kids. Four weeks into the program it was just me and a girl named Jill, dutifully dragging our violin cases past the taunting gauntlet of non-musical louts. As the school year ended, I persuaded my parents to fund private lessons with Mr. Finaldi, who rewarded me with a Handel sonata. Not quite the “Hot Canary,” but at least I was leaving the likes of “The Happy Farmer” behind.

While my proficiency on the instrument would never get me much beyond Handel, I got to know the violin’s compelling characteristics. I bought sheet music well beyond my skill, and abetted my struggles by listening to the great violinists play these pieces.

First of which was the concerto by Mendelssohn. In proposing the piece to a violinist friend, the composer wrote, “One in E minor runs through my head, the beginning of which gives me no peace.” As well it shouldn’t. Like the minor-key opening of his “Hebrides Overture,” Mendelssohn’s first melodic salvo is a haunting strain over quivering strings, and I couldn’t get enough of it. The sheet music revealed that the slow middle movement’s most dramatic effect was the result of the soloist, in effect, accompanying himself, playing the melody on one string while simultaneously playing alternating-note figures on an adjacent string.

And the third movement’s brilliant first tune sprang like an eager feline from a couple of close-to-home jumps into a leap that then pranced among the treetops. Our local library provided recordings by Zino Francescatti and David Oistrakh. I discovered how different two interpretations of the same piece can be.

All of which set me up for a more far-reaching revelation. It was a radio broadcast of the piece that I heard on the family’s small table radio one weekend afternoon, and the violinist, Jascha Heifetz, was unknown to me. He played the opening with more urgency than I’d heard before, but it was in that last-movement theme that he won me. So driven and precise and colorful was his rendering of it that I got chills as I listened.

This kicked off a fierce fascination with Heifetz and his recordings. Back then, as I entered my teens, I hadn’t the resources to buy many records, and only a limited amount remained in print. I did what any right-thinking kid would do, and joined the RCA Record Club (classical division), which offered an introductory package of four (not 12) LPs for a penny, with an obligation to buy four more – but you know how it worked.

The introductory package contained concertos by Beethoven, Brahms, Tchaikovsky, Mendelssohn, and Prokofiev (No. 2). No other Heifetz recordings were listed in the monthly magazine from which I was supposed to make my selection, so I got myself a Schwann catalogue, which listed the details of in-print classical recordings, and wrote in my Heifetz requests. And, amazingly, I got them.

As I learned the violin’s repertory through recordings, I acquired sheet music to match. High-school field trips to Manhattan helped. I knew my way around the city and was able to persuade my teacher-chaperones to let me skip lunch and head instead to Patelson’s Music Store, near Carnegie Hall (now, sadly, shuttered) or, when there was time, down to Cooper Square and the Carl Fisher store, where the older pieces of sheet music (including many Heifetz arrangements) hadn’t been repriced in years.

Bach’s solo sonatas proved that the fiddle could sing a four-voice fugue. Bruch’s Concerto No. 1 finished with an astonishing display of double-stopping. Ravel’s “Tzigane” has a passage in harmonics, a devilishly difficult technique when you’re called upon to use two fingers to produce those celeste-like notes, in which Heifetz also throws in a slide and a beautiful bit of vibrato.

Paganini’s Concerto No. 2 has a last movement calling for fiery left-hand pizzicato, which bears some explanation if you’ve never seen it performed. It’s common enough to ask a violinist to pluck with the fingers of the right hand (the bow hand) the strings of the violin that’s held in the left hand, but it’s a more challenging matter indeed to use the left-hand fingers to pluck strings that you’re also stopping with other left-hand finger, especially in rapid succession. To further complicate it, you might also be asked to alternated bowed and plucked notes.

Or, at its most devilish, to use both hands to pluck the strings, as in Paganini’s “God Save the Queen” Variations, which drives the difficulty level further by calling for a left-hand pizzicato trill while the bow drones a low note. I first encountered this piece on a Ruggiero Ricci recording titled “Bravura,” and later persuaded him to encore the piece at a recital.

Although I’m fairly partisan these days in my solo-instrument enjoyment, happily familiar with repertory for piano, guitar, brass, winds, you-name-it, and especially with other members of the string family, the violin remains closest to my heart and, occasionally still, my chin. I haven’t conquered “The Hot Canary” yet, but my Handel sonatas just get better and better.
Posted by B. A. Nilsson at 10:38 AM