From the CD Shelf Dept.: Here is a pair of brief reviews of historic-performance reissues that helped set the record straight, so to speak. The first, of Glenn Gould’s performance of Brahms’s Concerto No. 1 with Leonard Bernstein conducting, allowed us to hear a much-misinterpreted speech by the conductor; the second fixed a sound-quality issue described in the review. 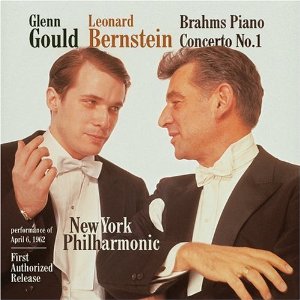 ON APRIL 6, 1962, following the New York Philharmonic’s performance of a couple of Nielsen pieces, as pianist Glenn Gould waited to take his place on the stage of Carnegie Hall, conductor Leonard Bernstein addressed the audience – and the radio listeners. Legend had it that the short speech allowed Bernstein to dissociate himself from the performance, and that he and Gould became bitter enemies as a result.

This recording, which reproduces the speech, the concerto, and some comments by Gould recorded almost a year later, corrects those faulty notions. Bernstein’s so-called dissociation is simply his confession that “I cannot say I am in total agreement with Mr. Gould’s conception.” And why is he conducting it? “Because I am fascinated – glad to have the chance for a new look at this much-played work. We can all learn something from this extraordinary artist.”

Still, the reviewers made it out to be a war. The NY Times’s senior critic, Harold C. Schonberg, wrote one of his most fatuous and self-serving reviews, parts of which are quoted in this CD’s program booklet.

The performance has more than stood up to the passage of nearly 40 years. Thanks to two generations of historical performance enthusiasts, we’ve learned to take no approach for granted, and Gould’s interpretation could be considered decades ahead of its time. It’s introspective without dawdling, technically superb, and sometimes downright contrary. All of which makes for fascinating listening.

Being a broadcast performance, it’s not of the highest audio quality, and that audience sure liked to cough. But it’s nice to finally have a for-real release of what until now was one of those elusive legends.

THERE’S NO GETTING AROUND the inferior sound of very old recordings, but legendary stories describe alternatives. The Heifetz and Toscanini recording of the Beethoven violin concerto is dry and muffled, but it’s said that a warm-sounding version exists. And then there’s the problem of the 1939 Heifetz-Feuermann recording of the Brahms Double Concerto.

Back in the days of 78s, longer works needed side breaks every four minutes or so, and these were agreed upon by the engineer and performers before recording began. Thanks to a misunderstanding at the Brahms session, the first movement’s side breaks weren’t correctly engineered. Rather than re-record the movement, RCA Victor’s engineers dubbed the 78 masters before pressing copies, with a resultant deterioration in sound. Every issue since then, including vinyl and CD, includes a surfeit of noise and a lack of clarity. 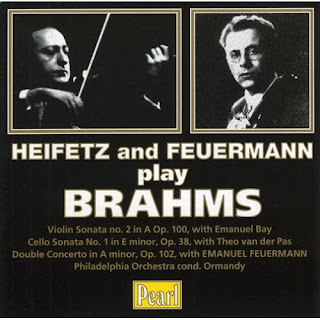 But the session’s producer kept test pressings of the originals, and these were transfer engineer Mark Obert-Thorn’s source for the current release. The difference in sound is remarkable. Orchestral nuances suddenly appear, and the soloists themselves have a far nicer edge to their sound.

Violinist Jascha Heifetz and cellist Emanuel Feuermann recorded only a few items before the cellist’s untimely death in 1942, and the Brahms concerto is probably the peak of their association. A youthful Eugene Ormandy brings out the vigor of the Philadelphia Orchestra in the only commercial recording both soloists made with the group, and there’s an overall intensity that didn’t make it into Heifetz’s later stereo recording with cellist Gregor Piatigorsky. Even the last two movements of the piece, unmarred by excessive duplication, sound better in these transfers than in the BMG (owner of the RCA catalogue) release.

The other recordings on this collection appeared together on a Biddulph CD, but well complement the Brahms concerto. Heifetz and pianist Emanuel Bay recorded Brahms’s Violin Sonata No. 2 in 1936, and it was a standards-setter for this cheerful piece. The first of Brahms’s two cello sonatas beautifully explores the sound of the instrument, and Feuermann’s 1934 recording with pianist Theo van der Pas also established a hard-to-match standard. These recordings also benefit greatly from Obert-Thorn’s transfer skills. For historic recording enthusiasts, it’s an unbeatable collection.