From the Radio Archives Dept.: I’ve been fascinated with Muzak ever since writing a college-era paper on the company, a research job that included a visit to its headquarters in 1974. I made no appointment beforehand, and arrived at lunchtime, when most of the offices were empty. But I found a very pleasant custodian who showed me around the facility and gave me some pamphlets about the company. “The have orchestras come in and record the music here,” he told me. “Sometimes I get surprised when I hear a new song done the old-fashioned way they like. I don’t think they’ll ever do any of those really new music styles.” “Like Reggae?” I suggested. “No,” he said. “Like – what do they call it? Rock and Roll.”

CHRISTMAS ARRIVED EVEN BEFORE Thanksgiving this year, and you know it’s on its way because it’s announced by the Muzak first. There you are in the supermarket trying to decide between a frozen pumpkin pie or a can of filling and another crack at preparing that crust when the tinny strains of “Deck the Halls” tickle your subconscious. 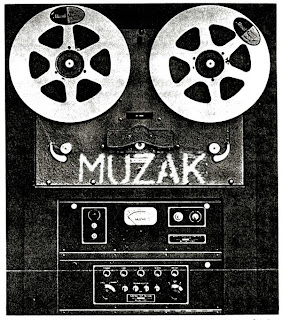 You look up in surprise. Christmas? Where’d that come from? Then you realize the tune is coming over the store’s speakers. Sure, they follow it with a quick “Gentle on My Mind” or something, but the stage is set. And you know that, once the Thanksgiving plates have been cleared and you’ve taken that deep I’m-going-to-get-the-shopping-done-early-this-time-for-real breath, you are going to be bombarded with that crap for the next five weeks.

Christmas Muzak is more insidious than you may think. Let’s first take a look at Muzak itself. It began in the early part of this century when someone had the notion of combining two new technologies: the phonograph and the automobile. He drove around broadcasting popular songs. An attempt to make any kind of industry out of it didn’t go anywhere until World War II, when it was discovered that the right songs, broadcast into the factories, increased worker productivity.

Muzak was, from the start, meant as a manipulative device, and today it’s a business that relies on a panel of psychologists who coordinate the song choices, the instrumentation, the tempos and so on, all specially designed to help sell products or keep the workers alert.

In a “retail environment,” Muzak programming is intended to encourage you to buy the particular lines that the store sells. And they’re very specific: they’ve got tunes that sell ice cream, tunes that sell washers and dryers. In an office or factory the music is programmed to perk you up midmorning and bring you down after the excitement of lunch. It’s on 15 minutes and off 15 minutes, and you don’t even notice which part of the cycle you’re in. In the stable, cows give more milk to the right Muzak.

So add to this already fiendishly clever brain game the arrival of Christmas, the biggest shopping season of all, a season that brings along its own tunes! Put into the hands of those psychologists a ready-made association and they can sit in their offices like so many comic-book villains and practice their cunning. It probably goes like this:

SCENE: A bunker in the steppes of Connecticut. The PROFESSOR, the DOCTOR, and the MASTER OF SOCIAL WORK sit at a table with a cassette deck and some legal pads at hand. They are listening to “Good King Wenceslas.”

MSW: There’s snow in there too. Maybe it can sell sleds!

DOC: You’re missing something important. This man is a king. There’s a terrorist angle in that.

PROF He’s right. Terrorism is very big today. There re some wonderful action-figure terrorist dolls on the market now.

DOC Get with it. I’m talking international, not midwest punk. We’re talking about grab a gun and off the king. All right. We want something zippy. Get me an up-tempo “Wenceslas” with strings.

PROF: How about a bossa-nova arrangement?