SHOW YOUR FRIENDS how much you love them by giving them relief from Christmas music. Start with Jeanne D’Arc: Batailles & Prisons (Alia Vox), a recently released two-disc set assembled by Jordi Savall and his various musical forces. It portrays the short life of Joan of Arc with well-spoken narrative woven among music of her time, some actual, some created by Savall. 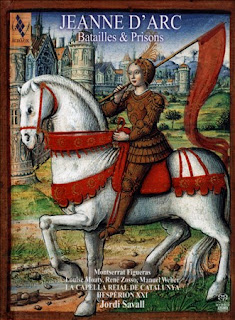 It’s presented in a small-book format, with scholarly text in several languages, lavishly illustrated. Along the same lines, in a similar format, is Savall’s Mare Nostrum (Alia Vox), a celebration of music from Mediterranean countries, exploring differences and, especially, similarities while traveling through Morocco, Spain, Lebanon and other neighbors.

Martha Argerich’s annual festival in Lugano, Switzerland yielded its usual three-CD set. Live from Lugano 2011 (EMI) features, as usual, the strings-playing Capuçon brothers (violinist Renaud plays Beethoven’s Sonata No. 8, cellist Gautier plays Schumann’s Fantasiestücke, Op. 73), and there are chamber works by Mozart, Haydn, Rachmaninoff and Zarębski. Not to mention yet another Ravel Concerto in G for her catalogue.

That festival also gives us a four-CD set of Lugano Concertos (DG), with first-ever recordings by Argerich and friends of works by Schubert (Divertissement a l’hongroise), Brahms (Liebeslieder Waltzes) and Milhaud (Scaramouche), along with concertos by Poulenc, Bartók, Schumann, Prokofiev (1 and 3), Liszt and Beethoven (1 and 2).

Beethoven 1 and 3 are the start of Leif Ove Andsnes’s Beethoven Journey, as Sony Classical saw fit to dub it, and there’s Andsnes on the jewel case back, thoughtfully peering over the tundra. Well; it’s his debut on that label, and he does an admirable job as pianist and conductor, with the Mahler Chamber Orchestra giving a suitably intimate accompaniment to fleet, beautifully recorded performances.

Here’s Beethoven yet again, this time improbably paired with György Ligeti on Jeremy Denk’s Ligeti/Beethoven (Nonesuch), in which Beethoven’s final piano sonata is the filling between two slices of Ligeti’s Piano Etudes (books one and two). It’s part of a program Denk presented at Schenectady’s Union College Concert Series a couple of seasons ago, and it’s a brilliant match. Ligeti’s recalcitrant, exuberant music needs only an open pair of ears, but the etudes are balanced by Beethoven’s end-of-life craziness.

Pianist David Greilsammer knows about balance and programming. His latest release, Baroque Conversations (Sony Classical), is in four suite-like sections, each of which puts a new(ish) work between two from the Baroque era. Thus, Matan Porat’s moody “Whaam!” comes after Couperin and leads into Handel, and it’s a convincing context also for works by Morton Feldman, Nimrod Sahar and Helmut Lachenmann.

Violinist Jennifer Koh was in town not long ago to present an unaccompanied recital, and much of the program is on her latest release, Bach and Beyond, Part I (Cedille). Again, we have the moderns riding in on Bach’s back, but that only underscores the old man’s incredible influence. A solo sonata by Ysaÿe was acknowledged by the composer himself (a star violinist in the early 1900s) to be very much in Bach’s debt, and newer works by Kaija Saariaho and Missy Mazzoli complete the recent roster; Bach’s Partita No. 3 opens the disc and the Partita No. 2, with its iconic Chaconne, masterfully played, closes it.

Steady visitors to the Union College Concert Series, pianist Wu Han, violinist Philip Setzer and cellist David Finckel recently performed there the two trios by Mendelssohn that comprise their latest release (ArtistLed). Mendelssohn was a well-known Bach enthusiast with an unending flow of his own melody; both of these trios are in minor keys, where the composer did his best work. As usual, the performances are stunning.

Trumpet star Alison Balsom surprised her fan base at the beginning of the year with Seraph (EMI), featuring the titular concerto by James MacMillan, which he wrote for her in his pleasant, angular voice, along with works by Alexander Arutiunian, Toru Takemitsu and a concerto by Bernd Alois Zimmermann based on “Nobody Knows the Trouble I’ve Seen,” followed by Balsom’s own arrangement of the spiritual.

No doubt those ruffled fans are soothed by Balsom’s latest release, Sound the Trumpet (EMI), featuring glittering works by Purcell and Handel and trumpet-voice duets with countertenor Iestyn Davies and soprano Lucy Crowe.

Also in the vocal realm, conductor Rene Jacobs has been working his way through Mozart’s operas; this year he hit one of the earliest, La finta giardiniera (Harmonia Mundi), but chose a posthumously edited and re-orchestrated version that serves the composer well – as does the cast, which includes Alexandrina Pendatchanska and Jeremy Ovenden. 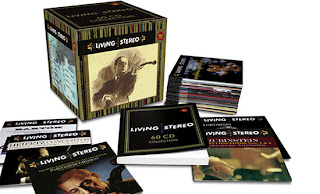 An absolutely delightful deconstruction of Vivaldi’s Four Seasons is the result of Recomposed by Max Richter (DG), giving violinist Daniel Hope and conductor Andre de Ridder (with the Konzerthaus Kammerorchester Berlin) a journey through the year in which familiar tropes are fragmented and new ideas emerge, yet the result is as exhilarating as the original.

Finally, for the aging audiophile on your list, there’s a Living Stereo Box Set out this month that offers 60 CDs for about a hundred bucks. It’s been available in Japan for a couple of years, which means it’s been eBay accessible, but the domestic release makes it more affordable. What you’re getting is RCA Red Seal in the glory days of the late 1950s, when stereo had arrived and the company’s engineers were making amazingly excellent-sounding recordings, with sonics that stand up to this day. Charles Munch conducting Saint-Saëns Symphony No. 3 was a preferred audiophile test record for many years; Fritz Reiner’s version of Strauss’s Also Sprach Zarathustra will rattle your speakers. Lots of Heifetz (including an unbeatable Scottish Fantasy), Rubinstein, and Cliburn, as well as Gregor Piatigorsky’s underrated romp through Dvořák’s Cello Concerto. Anna Moffo sings La Traviata, Jussi Björling headlines Turandot, Stokowski does his Stokowski thing and even Virgil Fox wields his dynamic organ. Wish I hadn’t bought them all separately over the years.