From the Vault Dept.: I suspect it now qualifies as a collector's item, this lavishly produced CD set issued fifteen years ago by the New York Philharmonic. Originally it was available only through the orchestra’s marketing division – but like all such things, it eventually ended up on Amazon.com, where you have the option of buying it ... from the NY Philharmonic (among other sellers). As of this writing, it has received only one Amazon.com review, a hilariously inept screed by a self-described “former music critic” who clearly has so much of a bone to pick with the personality of the orchestra that many of the performances therefore are damned. I can’t say I’ve ever had a run-in with the group, which may explain why my review spends more time on the music.

THIS 10-CD SET is a testimony to the art of conducting, with worthy insights about programming thrown in. I’d hate to have been the ones who winnowed through many thousands of hours of broadcasts to come up with the selections, but I’m grateful to those who did. 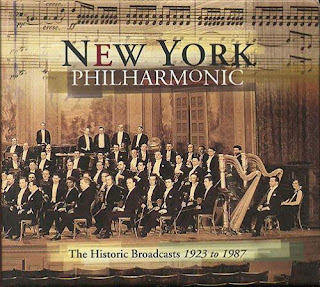 Although the 1923-24 recordings that begin the set weren’t broadcasts, they’re still impressively historic: Bell Labs waxed some sides with the orchestra to experiment with microphones, two years before the industry switched from acoustic to electric recording techniques.

Thus it is that we get a remarkably good-sounding 12 minutes’ worth of Strauss’s Death and Transfiguration conducted by Willem Mengelberg. Compare it to any contemporaneous recording and you’ll appreciate the difference. Then listen to Mengelberg’s interpretive style, honed under Strauss’s eye (the conductor was dedicatee of Strauss’s Ein Heldenleben). With broader strokes than you expect from an orchestra today, Mengelberg casts the music in an entirely different but still credible light.

Radio broadcasts of the orchestra began in 1930, and some of the recordings in this set were captured off the air by home enthusiasts, so source material varies from selection to selection. Disc two is all Toscanini, whose reign with the orchestra (1928-36) and popular broadcasts foreshadowed his work a decade later with the NBC Symphony. His conducting style is well documented on commercial releases, but even so the 1936 recording of the Brahms Violin Concerto, recorded with Heifetz during a NY Phil Brahms festival, is a revelation, with both soloist and conductor combined in an unusually mellow approach.

Stravinsky conducted a series of concerts in the mid-40s, and the set includes his versions of music by Glinka and Tchaikovsky–the latter’s Symphony No. 2, in fact, the performance of which demonstrates Stravinsky’s worship of the older composer, and which Stravinsky never commercially recorded.

Thanks to conductor-soloist pairings that never took place in the studio, we get to sample different approaches to familiar pieces. Artur Schnabel plays Beethoven’s Piano Concerto No. 3 with George Szell on the podium, a rare collaboration. Arthur Rubinstein and Bruno Walter never recorded together, but appear here in Chopin’s Piano Concerto No. 1, a trademark work for Rubinstein, here showing a surprisingly lush side of Walter. Pianist Josef Lhevinne rarely performed with his pianist wife, Rosina, and never recorded with her; here they combine in a two-piano arrangement of Mozart’s Concerto in F Major for Three Pianos, with master orchestral accompanist John Barbirolli conducting.

John Corigliano wrote a concerto in 1977 for NY Phil clarinetist Stanley Drucker, who premiered it with Leonard Bernstein conducting. Bernstein never recorded it, but the premiere performance is presented here. It’s an emotionally riveting piece with classical roots, shrewdly programmed after Erich Leinsdorf’s 1987 performance of Mozart’s Symphony No. 29.

Leopold Stokowski’s reign as NY Phil music director lasted a mere year in 1949, but he’s represented here in his only recording of Mendelssohn’s Symphony No. 3, surprisingly free of the usual Stokowski re-thinking of the classic works. His successor, Dimitri Mitropoulos, endured for nine years, and accompanies two notable soloists: Francis Poulenc in his own Concert champêtre and David Oistrakh turning in a fiery performance of Shostakovich’s Violin Concerto No. 1, which was dedicated to Oistrakh.

With over 12 hours of music in the collection, I could fill this column just by listing the pieces and performers. Trust me: there’s plenty more, and not a weak spot in the collection. What’s even more exciting, however, is that rediscovering these broadcast performances means we’re getting back a big piece of musical history that seemed to be lost. Even much-recorded conductors and soloists performed differently in front of an audience, especially going out over the radio. This will be a hard set to top, but there are many more broadcasts begging to be issued, so I suspect we can look forward to more.