From the Bookshelf Dept.: Before (ostensibly) packing it in with his final collection of essays, Final Fridays, John Barth was our most accessible experimentalist, deconstructing the processes of storytelling using every device the world of literature has to offer, including the use of a Möbius strip to tell a never-ending tale. The Last Voyage of Somebody the Sailor revisited one of his favorite storytellers, Scheherazade. Here’s my 1991 review.

IN JOHN BARTH’S LITERARY WORLD, the key to the story is the story. Techniques of storytelling become more than tools or devices, achieving characteristic momentum as funny or engrossing or suspenseful as any plot element. 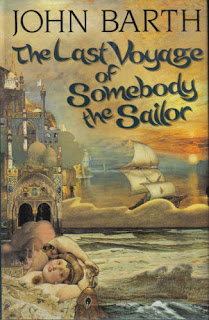 For example. Barth’s tenth and latest novel, The Last Voyage of Somebody the Sailor, turns the Arabian Nights inside-out by giving us a framing-tale set in Sindbad’s court in which a time-transplanted sailor appropriately named Behler or Baylor tells tales of his life as a 20th-century American journalist and the events that led to the ill-fated voyage that transplanted him to ancient Baghdad.

This is a work that’s symphonic in form, the literary equivalent of Rimsky-Korsakoff’s Scheherazade with a little Pictures at an Exhibition thrown in.

Not many un-overused plots are said to remain, but if you think you’ve heard them all you’ll be pleased with the way this novel avoids dependence on any single strain of storyline. Behler, the storytelling narrator, believes he has a spiritual twin in Scheherazade. He has a literal twin in a sister who died at birth, whom he keeps alive in an imaginary companion he calls “Bijou.” Bijou and Scheherazade both are addressed in the story Behler tells, or imagines an aged Scheherazade might be telling a visitor who resembles Barth/Behler but who unmistakably is the “Destroyer of Delights and the Severer of Societies.”

Describing Daisy (and Behler’s boyhood Chesapeake town of East Dorset), the narrative has a typical Barth richness and wordplay:


Though my earliest experiments both alone and with Daisy had shown me how inexpungibly, even in total darkness or underwater, we carry ourselves inside our heads--our time and place, who and what we are--my recent reading in Ms. Moore’s Arabian Nights had made me chafe at being ineluctably I and here and now but likewise at the iron constraints of nature itself, which made it quite certain that no fish would ever really talk and no genie appear from a bottle, nor would Daisy and I be magically transported from Dorset County to Samarkand or Serendib.

Like a New Vaudeville magician who shows how the trick is done and then tops it with something more astonishing, Barth enjoys demonstrating the mechanics of his craft. Telling us how it’s done, when Barth is doing it, then becomes part of the trick.

He has written essays that describe his infatuation with Scheherazade, and even visited her in his novella Dunyazadiad. Here he goes one step farther, telling a Scheherazade-like tale in a loving tribute.

The challenges and satisfaction of such remarkable books as Giles Goat Boy and The Sot-Weed Factor are here sustained, with elements familiar from the author’s most recent novels (Sabbatical, The Tidewater Tales) nicely amplified. Barth no longer writes novels: he weaves them out of familiar fabrics long neglected, with interpretations so fresh as to seem visionary.