Stooge on the Doorstep

YESTERDAY I DREDGED UP a piece from 1987 that described, and not without attitude, some of the spirit of the Nicholson thrall that grabbed Albany-area people during the shooting of “Ironweed.” A similar frenzy gripped Schenectady last year when filming of “The Place Beyond the Pines” brought Ryan Gosling and Eva Mendes to town. 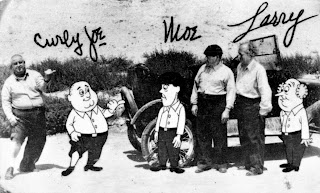 “Oh, come on,” you protest. “Show some sympathy. Was there never a time in which you shamelessly sought the company of somebody famous?”

Of course there was. A somebody more famous than anyone you’re ever likely to meet. Keep in mind that the course of my work has put me in contact, by phone or in person, with many childhood idols, and I’ve learned to treat these events as unremarkable. Usually there’s an interview to pursue, which doesn’t work if the interviewer is busy being star-struck.

Such was not the case, however, when I was ten years old, which puts this story in 1966. My family lived the commuter suburb of Ridgefield, Connecticut, about ninety minutes from Manhattan. Our street, Hessian Drive, was in the geographical center of town. It was a short cul-de-sac flanked by six houses.

A seventh house sat near enough our street to seem part of it, but its formal address was North Salem Road, an adjacent main thoroughfare. It was larger than any of the Hessian Drive estates, and predated the arrival of the street. It was owned by a family named Gelfman. Unlike the other modest properties, they had a fabulous yard with trees and lawn space.

Nelson Gelfman was a pathologist at nearby Danbury hospital. His wife, Mary, stayed home with their two young daughters, Celia and Kay, and even younger son David, which was what most moms on the street and in the town did back then. Celia was the older of the girls, and was my age or not much younger. The enthusiasm of my recollection of her is clouded by her insistence on playing “house” when my brother and I visited. To her credit, she was skillfully able to euchre us into doing so. Not that I minded the game itself. Domesticity was a fact of life, making the parameters of the game easy to grasp, if annoyingly ritualistic. What troubled me was the possibility of being caught at it.

The fellow I feared was our next-door neighbor, Kenny Carpenter, a boy my age with a streak of the savage within. Which made it increasingly difficult for Celia to persuade me into joining her game, until one afternoon she played the ultimate trump card. “If you play with me,” she said, “I’ll tell you a secret.”

Among kids, that’s powerful medicine. Surely this was a tidbit from grown-up territory. The adult world still seemed riddled with secrets, so why shouldn’t a few crumbs be tossed our way?

The time-honored response, of course, is along the lines of “you don’t know any secrets,” but I doubt I employed that one. I was an eager, credulous soul. After all, I played house with her. “What’s the secret?”

It was, in fact, a bombshell. “Moe’s coming to see us tonight.”

No further identification was needed. Moe was a presence on our TV screens not only thanks to endless reruns of the Three Stooges movies, but also because he was a frequent guest on “Officer” Joe Bolton’s afternoon program on Channel 11. But this was like suggesting President Johnson would be stopping by. In fact, it was less believable.

“Why would Moe be coming to your house?” I asked.

“Because he’s my mother’s cousin,” she said. “And we’re not supposed to tell anybody about it.”

Which meant that I had just played house in order to be tantalized with news too fantastic to be true, and yet useless to me if it came to pass. Which is what I complained to Kenny when I shared this potent piece of info.

“Let’s go over there and check,” he suggested.

“We can’t do that!” I didn’t want to get Celia in trouble, but I couldn’t tell him that.

“We’ll just look in the window. They won’t see us.”

We waited until it was dark enough to give us cover. My brother insisted on tagging along, too, so I can’t imagine we were the quietest of spies. We hugged the side of the Gelfman house and eased from window to window, taking turns to see if we could spot the honored guest.

So adept are we as children at building massive monuments of anticipation that the seemingly inevitable disappointments drop us way, way down. I don’t know that we ever get used to it. We learn to sculpt those monuments smaller. But here was a moment when actuality outstripped anticipation: the moment when Kenny peered through a living room window and hissed, “It’s HIM!!”

We took turns peeking. Sitting on a couch in the living room was the unmistakable figure of Moe. This made the threat of getting caught all the more deadly. We hurried back to my yard. “What are we gonna do?” asked Kenny, as if this were a problem that needed to be solved.

“We gotta meet him.”

“What are we supposed to do, ring the doorbell?”

This spoke volumes. Mrs. Gelfman – even now, I can’t think of her as someone with a first name – was not a person you trifled with. When she wanted her yard free of visitors, she said so. In my limited experience with her, she had wasted no pleasantries. And she was known throughout the neighborhood for that most horrible habit of all: handing out healthy stuff on Hallowe’en.

What if she answered our ring?

And yet . . . there he was. Moe. Sitting a scant few feet away from us if only those walls would vanish. Our war council was brief. Our mission was set. We crept back to the Gelfman house.

I don’t know how long we stood by that front door, but I remember it felt like forever. Each of us came up with brilliant reasons as to why the other should press the doorbell. I had believed Kenny a reckless enough daredevil to care nothing of Mrs. Gelfman’s possible scorn. Yet he cowered now as badly as my brother and I. Perhaps that’s what gave me the fortitude to stab button. That, and, as Kenny pointed out, “You’re bigger than we are.”

The chime of the bell within resounded like a carillon pealing the “Dies Irae.” Too late now. Footsteps approached.

There she was. Mrs. Gelfman, with disapproval in her pursed lips magnified, it seemed, by the tight curls of her hair. “Well,” she said, looking us over. “I suppose you want to meet Moe.”

“I’ll get him.” We quivered on the stoop as she walked down the hall, leaving the front door open. And then Moe appeared, a tiny figure at the other end of the foyer that didn’t get much bigger when he finally stood before us. “Hello, boys,” he said cheerfully as he pulled a stack of cards from a pocket. He wore his hair combed back, but I knew from the Joe Bolton appearances that it would form the trademark bowl cut if he pushed it forward. He was nearly 70 at that point, but looked ageless to me.

The cards had a photo on one side and were blank on the back. He asked our names in turn and inscribed a card to each of us in a neat, looping hand. When he got to me, he looked up in surprise – even at ten, I was nearly six feet tall – and said, “My, you’re a big one!”

And that was our meeting. I don’t believe Celia got in trouble, but I can’t recall talking about it with her again. 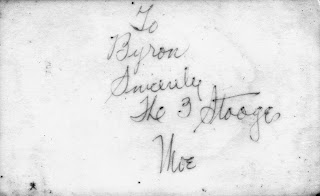 The cards, by the way, were designed to tie in with a cartoon/live-action series titled “The New Three Stooges,” which never grabbed my interest – aligning me with most other fans of the actors. Pictured were the then-current lineup, which you can see on the scan, of Moe, Larry, and Joe DeRita, alongside their cartoon manifestations. On the back: “To Byron. Sincerely, The 3 Stooges. Moe.”

It’s the only possession I retain from that long ago.
Posted by B. A. Nilsson at 1:24 PM

What a story. A good childhood yarn. Loved it. -- Susan

Sounds accurate, though Mary is very nice..... Was a great street to grow up on, according to David Gelfman , my husband!

Oh, Mary totally redeemed herself in my eyes that evening!