Yesterday, I looked at a soon-to-open restaurant, which I won't review for at least another three months. But once I review a place, I rarely seem to get the opportunity to check up on it. My Sage Bistro review ran in the Jan. 27, 2011 issue of Metroland, but things changed shortly thereafter. Here’s an update. 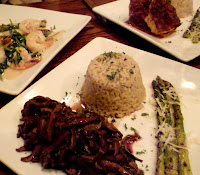 “Two of the area’s most creative chefs have combined their talents to produce an unlikely restaurant. It’s in an unlikely spot, boasts an unlikely array of entrées, and is unusually inexpensive.” Less than two months after I wrote that, one of those chefs decamped.

Sage Bistro began as a joint venture of Joseph Soliman and Un-Hui Filomeno, combining his Middle Eastern and her Asian heritages and cooking styles. Both are well versed in continental fare as well, but I worried that Filomeno’s departure might have a bad effect on the restaurant.

A year later, the place is doing very nicely. Soliman, who developed his style at Delmar’s Hidden Café, which he owned and ran for nearly a decade, occupies the solo driver’s seat here with aplomb and creativity. The restaurant is in Guilderland’s Star Plaza, and was formerly home to an Italian restaurant that featured a tempting gelato display. The display remains; ice cream flavors abound. It’s one of the many pan-European touches that work well here.

A bar and casual dining area give way to a more formal dining area. Between them is the pantry’s small kitchen. And when you see a plate of a multi-colored variety of starters, hope that it’s yours. Soliman’s hummus always has been top-notch, garlicky and smooth; add to it his take on babaganoush and you understand that the Egyptian native knows his stuff. But there’s also a feta salad that hints at the style of Greece, along with a robust but sweet Italian tapenade.

Entreés are served with salads, and while I’m no fan of the dressing-on-the-side phenomenon, preferring it either tossed in the kitchen or served in a family-style bowl in which I can toss it myself, I have to commend the spicy cucumber dressing that’s offered.

Entrée selections range from $16 to $24, with less-costly small-plate options for some items. Portions are correctly sized, avoiding the excess that sometimes seems to be a restaurant’s main selling point.

I’ve been a fan of Soliman’s lamb preparations since the Hidden Café days. At Sage Bistro, he serves a grilled tenderloin marinated with lamb’s must-have herb, rosemary, sliced and served with rich sauce based on what I think of as lamb’s favorite wine: Shiraz. And then topped with shiitake mushrooms.

Duck, salmon, sea bass, steak – you’ll find the favorites, but the duck is in a mission fig reduction, the salmon is blackened and pan-seared, the sea bass gets a Moroccan charmoula topping, and the steak is au poivre.

We sampled the lemon shrimp, a simple but very effective sautée with garlic and white wine, and a chicken special that stuffed a breast with prosciutto and asparagus and provolone, with an excellent tomato sauce.

Back in the Hidden Café days, when Soliman was struggling to overcome the anonymity built into his location, service could be variable. I’m happy to see that the high standard he set when opening Sage Bistro remains, and each of the staff we encountered was efficient and personable. Although one server was nominally in charge of our table, all worked together to make short work of serving and clearing.

It’s natural for a restaurant to show itself at its best early on, but I’ve heard complaints over the years that places I praised didn’t live up to the promise as the months went by. I’m happy to see that, if anything, Sage Bistro is getting better.
Posted by B. A. Nilsson at 5:10 PM