How Jack Found that Beans
May Go Back on a Chap 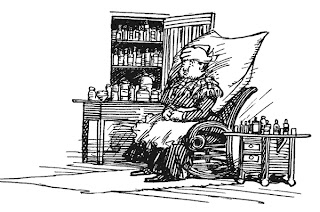 Without the slightest basis
For hypochondriasis
A widow had forebodings which a cloud around her flung,
And with expression cynical
For half the day a clinical
Thermometer she held beneath her tongue.

Whene’er she read the papers
She suffered from the vapors,
At every tale of malady or accident she’d groan;
In every new and smart disease,
From housemaid’s knee to heart disease,
She recognized the symptoms as her own!

She had a yearning chronic
To try each novel tonic,
Elixir, panacea, lotion, opiate, and balm;
And from a homœopathist
Would change to an hydropathist,
And back again, with stupefying calm!

The closets of her villa
Were full of sarsaparilla,
Ammonia, digitalis, bronchial troches, soda mint.
Restoratives hirsutical,
And soaps to clean the cuticle,
And iodine, and peptonoids, and lint.

She was nervous, cataleptic,
And anemic, and dyspeptic:
Though not convinced of apoplexy, yet she had her fears.
She dwelt with force fanatical
Upon a twinge rheumatical,
And said she had a buzzing in her ears! 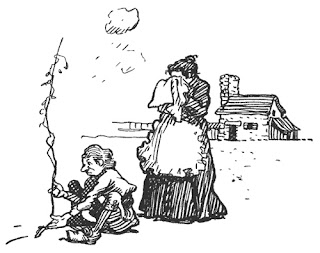 Now all of this bemoaning
And this grumbling and this groaning
The mind of Jack, her son and heir, unconscionably bored.
His heart completely hardening,
He gave his time to gardening,
For raising beans was something he adored.

Each hour in accents morbid
This limp maternal bore bid
Her callous son affectionate and lachrymose good-bys.
She never granted Jack a day
Without some long “Alackaday!”
Accompanied by rolling of the eyes.

But Jack, no panic showing,
Just watched his beanstalk growing,
And twined with tender fingers the tendrils up the pole.
At all her words funereal
He smiled a smile ethereal,
Or sighed an absent-minded “Bless my soul!”

That hollow-hearted creature
Would never change a feature:
No tear bedimmed his eye, however touching was her talk.
She never fussed or flurried him,
The only thing that worried him
Was when no bean-pods grew upon the stalk!

But then he wabbled loosely
His head, and wept profusely,
And, taking out his handkerchief to mop away his tears,
Exclaimed: “It hasn’t got any!”
He found this blow to botany
Was sadder than were all his mother’s fears. 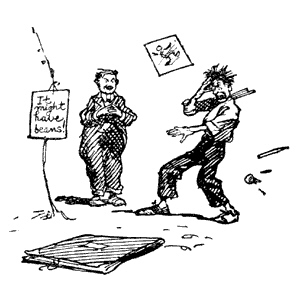 The Moral is that gardeners pine
Whene’er no pods adorn the vine.
Of all sad words experience gleans
The saddest are: “It might have beans.”

(I did not make this up myself:
’Twas in a book upon my shelf.
It’s witty, but I don’t deny
It’s rather Whittier than I!)