From the Food Vault Dept.: What’s encouraging is that, thirteen years later, almost all of the winter farmers’ markets detailed below are still in operation.

IT’S MORE THAN GOURDS AND COLLARD GREENS. Winter produce is tough-skinned stuff, those spaceship-like spears of Brussels sprouts perhaps the most emblematic. And while it’s true that these are good things to eat and you celebrate the season by eating them, you’ll find much more than cold-weather comestibles at those farmers markets that choose to run through the winter. 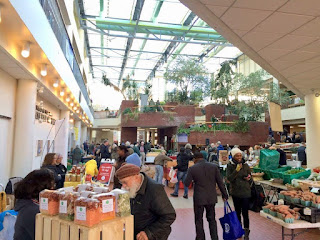 The phenomenon of these markets has been considerable and impressive, not only offering consumers fresh, locally grown items but also presenting the growers themselves. And bakers. And cheesemakers. And craftspeople.

Nothing beats being able to admire a loaf of bread and while you’re learning its provenance. For some, an accurate ingredients list is vital. For some, there’s a wonderful sense of community in the act of eating locally grown and/or assembled stuff.

The number of local farmers markets has exploded, giving us an unprecedented warm-weather bounty. I’m sure you’ve seen it: booth after booth of vegetables, fruit, meat, cheese, honey and milk, along with artisan products like crafts, sauces, jam, clothing – anything made by hand.

Carrying such an operation into the winter needs a more hospitable space, and an aggressive handful of such spaces now accommodate the area’s year-round markets. Troy’s market has grown over the years to become the area’s standard-setter, and its winter home in the Uncle Sam Atrium is four hours of cheerful bustle.

“It’s incredibly wonderful to have this,” says Suzi Place of Witenagemot Farm in Schaghticoke. She and her husband Arthur bring fruit and vegetables, cornmeal and beans and even popcorn to Troy on Saturdays and to the Schenectady Greenmarket on Sundays. “Everybody who participates is either growing what they bring locally, or making it themselves. You can’t just be a reseller.”

Along with such vegetables as kale, collards, broccoli, parsnips, turnips, rutabaga and those other seasonal favorites are greenhouse lettuce (and other greens), tomatoes, mushrooms and at least ten varieties of potato.

“And – let me walk through the aisles in my mind,” says Place. “There’s honey, milk, lots of different meat. Bacon, other pork products, beef, lamb, chicken. There’s locally milled flour. We have three wine vendors, one of whom makes an excellent sparkling wine.”

There’s live music in Schenectady as well, and on two levels – literally. “We have a group playing on a stage upstairs,” says Cheryl Nechamen, “and downstairs there’s a jam session. The market takes place in Robb Alley, which is alongside the Proctor’s Arcade, and we’re able to use two levels there.” Nechamen is one of the principal organizers of the market and a tireless promoter of local food. “Our first day, which was November 2, we counted 1800 people. The second week, our vendors brought more and they sold out earlier.”

Schenectady’s market leans more towards food than crafts, says Nechamen. “We have tomatoes from Underwood Greenhouse, which grows them hydroponically. Sweet Tree Farm raises grass-fed beef, as does Mariaville Angus, which also supplies other types of meat.” The market runs from 10-2 on Sundays, giving Troy’s Saturday vendors another stop on the circuit. Both markets have websites (addresses are below) that describe who supplies what.

“We go to both markets,” says Jody Somers of Dancing Ewe Farm, “and we’re also at the Union Square Market in Manhattan on Fridays.” Somers hand-crafts Tuscan-style cheese, including pecorino, caciotta and a ricotta so fresh and rich that’s it the cheese of choice for Mario Batali’s Manhattan restaurants. “Farmers markets are a nice opportunity to bring to retail a product that’s typically sold through a middleman,” says Somers. “And it’s an opportunity to meet the people who buy your product. Also, let’s face it, it’s a cash infusion into the pocket.”

Another summer market that moves indoors for the winter is in Saratoga. “We’ve been doing it year-round for seven years now,” says Liza Porter, of Homestead Artisans Enterprises. “Four years ago we found our current site, in the Salvation Army building, about a block away from Borders Bookstore.” Porter herself makes eleven kinds of cheese from cow and goat milk. “The market has greenhouse lettuce, spinach, carrots, potatoes, onions. Also meat, cheese, baked goods, apples, honey, jam and holiday crafts through Christmas.

Albany’s biggest market, at the Empire State Plaza, moves just underground to the Plaza Concourse, with a rows of vendors lining the hallway Wednesdays from 10-2.

“I don’t want to overstress what we do at our market,” says Annette Van Anker. She’s speaking of the First United Methodist Church Farmers Market in Delmar, which runs Tuesday afternoons through Nov. 25. “We’re a smaller market, but we offer barbecued chicken and baked goods in addition to cool-season vegetables and tree fruits.”

And the Cohoes Winter Farmers Market is one of several enterprises you’ll find at the Harmony House Marketplace in Cohoes, offering eggs, meat, cheese, jam, apples, fudge, seasonal produce and a host of crafts. It runs Fridays through Dec. 19.

Several different websites try to collect information about these markets, although I discovered many of the listings to be very out of date. The markets themselves typically are represented by one or another of the vendors – and somebody working the barn or field isn’t always easy to reach by phone. But this listing should get you through the winter, and as the weather warms, look for an even wider range of outdoor markets to blossom.