JAMES REBANKS SNEAKS UP ON YOU. His prose is colorful and decisive. He’s writing about nature, which encourages lavish description, but he’s writing about the indignities humans have imposed on nature, which encourages hand-wringing. He does neither. He is a documentarian sharing a first-person farming experience in such a way that broader truths are easily perceived, and he is hopeful enough to keep it from seeming too apocalyptic. 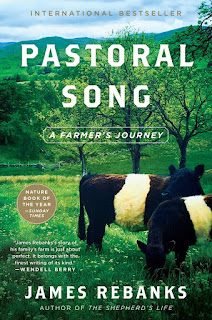 Pastoral Song is Rebanks’s third book, following The Shepherd’s Life and The Shepherd’s View, both of which earned him deserved praise. Pastoral Song was published last year in the U.K as English Pastoral and promptly hit the best-seller lists. That in itself is hopeful, as this book takes aim at the horrific consequences of industrial farming, something that can be reversed only if enough people understand how they can participate in that change.

The story starts on a farm in the north of England, where a very young Rebanks learns to work the fields and livestock alongside his grandfather, a man who held new farming technologies in disdain. “There was something about working the land on foot behind a horse that seemed to make him see the world differently from the way later generations would see it from a powerful tractor. My grandfather knew our fields as if they were extensions of his body.”

It’s a portrait of his grandfather’s farm, but it’s also a portrait of England as an agricultural nation, struggling to keep up with 20th-century changes. “Time seemed to slow down around my grandad,” writes Rebanks, “He believed in watching carefully and taking time with his animals.” It’s a farm populated with the cows and sheep that Rebanks’s father and grandfather are managing, but it also boasts plenty of other fauna and flora that thrive in the wild. Not all of them benevolent, of course – there’s a passage describing the struggle to take down thistles using sickle and scythe – but all existing together in a natural and important harmony.

And then the prices began to fall. As industrial farming seized the world, both production and farm subsidies increased, driving down profits. The Rebanks farm had some 80 Friesian cows until the 1980s, when adjacent land came up for sale and they had to sell the cows in order to buy that land in order to increase production in order to pay the ever-mounting bills.

This is described in the first part of the book, titled “Nostalgia.” It’s the second part, “Progress,” wherein things fall apart. Young Rebanks flees the family farm and his rather’s unpleasantly stern hand to spend time working on a farm in Australia, where he’s introduced to newer, machine-intensive methods. Back home in England after a few months, he’s confronted with a family farm much deeper in debt. He reads, researching historic methods of crop and livestock rotation – and then learning about the rise of artificial soil additives, such as Nobel Prize-winner Fritz Haber’s ammonium nitrate fertilizer (although no such prize was awarded for his invention of the Nazi-preferred killing agent Zyklon-B) and Swiss chemist Paul Hermann Müller’s invention of DDT.

Bristling under the too-stern hand of his father, James would sneak out of the house at night to enjoy the fields and wildlife, and on one such occasion he brought a life-changing book: Rachel Carson’s Silent Spring. It opened his eyes not only to the catastrophic side-effects of pesticide use, but also to the damage being wrought by industrial farming in general. And he was in a position to see some of those effects first hand.

What follows is the most compelling aspect of Rebanks’s story. It’s not an anti-industrial-age screed. As a farmer himself, having inherited (and added to) the land his father and grandfather once farmed, he has to deal with the very real challenges of making a rugged, rocky farm work for him and his family. And that’s where the book’s third part, “Utopia,” becomes compelling, as he describes an ongoing process of re-balancing his approach to farming in order to return to a healthy system that still can compete in an industrialized world.

“An agricultural student came to our farm last year, and when I showed him our hay meadows and explained their diversity of wildflowers and grasses, he looked at me with a mixture of confusion and contempt, as if I were a charming but delusional fool from another age. He boldly told me his tutors would recommend my fields were plowed to get rid of the ‘weeds’ and reseeded with modern grass. The idea that a farm might be anything more than a productive business was completely alien to him.”

Yet Rebanks has pursued his course, understanding that he and his family can’t, at this point, life off whatever profit the farm brings, because the ongoing debts assure that there is no profit. But it’s a process of healing that he continues to pursue. He’s no radical; he’s choosing the tools that work best for the farm, knowing that only when a critical mass of farmers begins to do likewise will the land recover and farms start to truly thrive. And when consumers are convinced that we’re paying unrealistically low prices for food, prices achieved at the cost of the health of the planet.

It’s a straightforward, painful message Rebanks shares, and he does so without becoming preachy or overly sentimental. Or a braggart. He’s aware that his seeming virtue is illusory. “A prudent gambler would not bet his house on our virtue, because the odds say we will fail. There are a million reasons to believe that we are not big enough, brave enough, or wise enough to do anything so grand and idealistic as stop the damage we are doing. We are choking to death on our own freedoms. The merest mention that we might buy less, or give anything up, and we squeal like pigs pushed away from the trough.” And yet, he writes, “despite everything, I believe we, you and I, each in our own ways, can do the things that are necessary.”