“NORWAY BECAME OIL-RICH in the 1970s, so our view of the country is as a prosperous place on the right side of human rights,” said Darra Goldstein, introducing a talk about Norwegian culinary practices. “But before that they were seen as poor, and the Swedes and Danes looked down on them.” 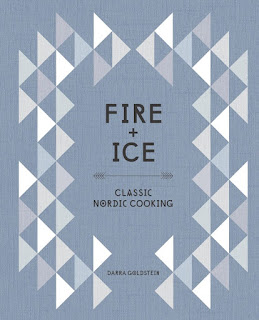 We were assembled at the Lunder Center at the Clark Art Institute in Williamstown, Mass., at an array of tables where each place was set with a slice of rhubarb Tosca cake. Darra Goldstein is Professor of Russian, Emerita at Williams College and founding editor of Gastronomica: The Journal of Food and Culture, which was named the 2012 Publication of the Year by the James Beard Foundation.

She also currently serves on the Kitchen Cabinet of the Smithsonian’s National Museum of American History and on the Advisory Board of the Julia Child Foundation for Gastronomy and the Culinary Arts. She’s been a featured speaker at the institute many times before, and this time was tasked with tying in a look at Norway’s food with the Clark’s exhibition of the art of Norwegian painter (and farmer) Nikolai Astrup.

“It’s a difficult country to farm,” Goldstein said. “Only three percent of the land is arable. Many farmers concentrate on raising cows and goats for dairy products – I’m sure you’re familiar with Jarlsberg, which is the least interesting of their cheeses – while many more make a living from the sea.”

Goldstein is the author of several cookbooks, among them Fire + Ice: Classic Nordic Cooking, a collection of recipes and essays exploring the culinary traditions of Norway, Sweden, Finland, and Denmark. She writes, “Recipes reveal so much more than ingredients — they reflect history, culture, and global migrations. Most important, they're delicious to eat and even better when shared.”

As for the cuisine of Norway, “Picture darkness that descends over the landscape,” she said. “It’s the backdrop to Astrup’s paintings.” The painter was the son of the very conservative parish priest, who nevertheless allowed the young man to study art, first in Kristiania (now Oslo), then in Paris. “But Astrup soon returned to his boyhood home in Jølster. Beyond his painting and prints, he was a serious horticulturist.” Among the crops he favored were rutabaga, of which he produced his own varieties through cross-breeding and grafting. It was a harsh climate and terrain that he had to work with, “but he successfully grew apples and bird cherries,” Goldstein explained, “and ground the bird cherries into a mahogany-colored flour. The locals also used potato flour because wheat is hard to grow there.”

Based on his paintings of them, Astrup’s gardens displayed “a surging sense of nature. The midnight sun does amazing things to plants, and they’ll grow very fast. Angelica, for example, can reach seven feet in height. It has white flowers, that are a symbol of spring, and you can steep a calming tea from its leaves.”

Then we were on to the star of the show: rhubarb. “As the cherry trees bloomed, the rhubarb leaves doubled in size, according to Astrup,” said Goldstein, noting that the plant is a vegetable, not a fruit, and it’s a cousin to buckwheat. “The name itself comes from the Greek, by way of Latin, probably from ‘rha,’ an ancient word for the Volga River.” Then, because it was a foreign plant, “barbarum” came from the word for “barbarian.” The genus name means “flow,” and, as Goldstein explained, “the root was prized more than gold by Russians. It was dried and used as a laxative, and became an important component of Russian trade. It financed many military campaigns, until a surgeon named James Mounsey smuggled rhubarb seeds to Scotland.”

Our tables at this lecture were set with two items: a slice of rhubarb Tosca cake, and a pitcher of pinkish rhubarb refresher, both recipes taken from Goldstein’s Fire + Ice, and prepared by the Clark Art Institute’s chef, Chris Gouty. A Tosca cake (possibly named for the Puccini heroine) is a Scandinavian almond-flavored sponge cake, so the addition of rhubarb stalks gives it a very pleasant tang. Goldstein thought the rhubarb she’d obtained for this preparation was a bit too tame, so she enhanced the servings with a few slices of fresh, raw rhubarb on top of each. Needless to say, they were delicious, and the few extra servings also vanished quickly.

For the refresher, three pounds of rhubarb stalks are simmered with water, lots of sugar, and vanilla beans, then cooled and strained (save those stalks!). The resulting syrup is mixed in a 1:3 ratio with still or sparkling water and served like iced tea.

“It wasn’t until the 19th century that people began cooking with rhubarb,” said Goldstein, “because that’s when sugar became widely available and affordable. It’s actually kind of a miracle plant, high in fiber and vitamins K, with anti-oxidant qualities as well. And it’s easy to propagate. So it’s good for you, as long as you remember not to eat the leaves, which contain an toxic amount of folic acid.”

Among the other Norwegian preparations she described were a compote simmered with honey or sugar, often mixed with apples and strawberries for pies, or turned into jams, jellies, and sauces.

“Most classic is a cold summer soup with strawberries, with a base of water or white wine, thickened, if desired, with potato starch. They also make it into a rhubarb fool, where you simmer one-inch pieces with sugar and water, purée it, then drizzle it with heavy cream or fold it into whipped cream.”

More recently, she said, Norwegians have been treating it as a vegetable, as in a raw rhubarb and cucumber salad. “The Norwegian climate is too cold for grapes, so they make wine from apples or blueberries – or rhubarb. Astrup was famous for his rhubarb wine.”

But for a real Nordic challenge, she said, try the Devil’s Rhubarb. “You start with a raw stalk of it, dip it in a bowl of sugar, take a bite – and follow it with a slug of vodka. It warms you on those cold nights.”

Preheat the oven to 350°F. Line the bottom of a 9-inch springform pan with parchment paper, then butter the parchment paper and the sides of the pan.

In the bowl of a stand mixer, beat the eggs and the 1 cup of sugar on medium high speed until pale and light, 3 to 5 minutes. Meanwhile, stir together the flour, baking powder, and salt in a small bowl. Add the melted butter and vanilla and then the flour mixture to the eggs, beating just long enough to combine. Pour the batter into the prepared pan and spread evenly. Toss the rhubarb with the remaining 2 teaspoons of sugar, and scatter evenly over the batter, pressing the pieces down to the bottom of the pan.

Bake the cake until puffed and golden at the edges and just barely done, 50 to 55 minutes.
Ten minutes before the cake is done, make the topping. Melt the butter in a small saucepan over low heat. Combine the sugar and flour in a small bowl, then stir into the melted butter in the pan, along with the almonds and cream.

Remove the cake from the oven and raise the temperature to 400°F.

Simmer the prepared topping until bubbly, about 3 minutes, stirring only once or twice so you don’t break the nuts. Quickly spoon the topping over the warm cake, spreading it evenly to the edges of the pan with a small spatula. Bake until the topping is golden and crisp, about 10 minutes more.

Cool the cake on a rack for at least 10 minutes before removing the ring of the springform pan. This cake is delicious warm or at room temperature.

Trim the ends of the rhubarb and cut the stalks into ½-inch slices. You should have about 12 cups of sliced rhubarb. Place the rhubarb in a saucepan with the water, sugar, and vanilla beans. Bring to a boil, then cook at a low boil, uncovered, for 10 minutes. Set aside to cool to room temperature.

When the mixture has cooled, discard the vanilla beans. Strain the rhubarb and juices through a fine-mesh sieve into a bowl, pressing down gently on the fruit. (The poached fruit can be refrigerated to enjoy later; it's wonderful when drizzled with cream.) You should end up with 2 cups of syrup. The syrup will keep for at least a week in the refrigerator.

To make the refresher, mix 1 part rhubarb syrup with 3 parts water (or use a different ratio, to taste). Serve over ice.