Guest Blogger Dept.: We welcome back George Ade, who has been busy grinding out more of his insanely popular “Fables in Slang.” Here’s his latest.

ONCE THERE WAS A WORRIED PARENT whose only Son could not quite make up his Mind whether to join a High School Frat or go on the Stage. 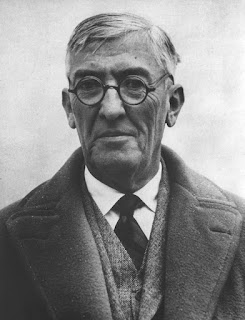 He was at the long-legged Age and walked Loose and stepped on his own Feet, and whenever he walked briskly across the Floor to ask some Tessie to dance with him, every one crowded back against the Wall to avoid getting one on the Shin.

He combed his Hair straight back, like a Sea Lion, and in Zero Weather wore a peculiar type of Low Shoe with a Hard-Boiled Egg in the Toe.

His overcoat was of Horse Blanket material with a Surcingle, and the Hat needed a Hair Cut and a Shave. When he topped off his Mardi Gras Combination with a pair of Yellow Gloves that sounded like a Cry for Help and went teetering down the Street, his Father would vent Delight
over the Fact that the Legislature had passed Game Laws.

One day at Luncheon Father got so Steamy that he had to blow off. So he opened up on Son and practically wiped him off the Map. He sure burned him Alive.

He kidded the whole Make-Up and said he was the Male Parent of a Champion Gillie, whatever that is.

He said the Hat was a Scream and the Overcoat was a Riot and the overlapping Collar with the dinky Four-in-Hand was a Comic Supplement, and why had such a Freak been wished on to a hard-headed Business Man.

He laughed brutally at the low comedy Shoes with the swollen Promontories and the Trousers with the double Reef and the folding Cuffs and the Hair with the Patent-Leather Gloss.

Mother sat back tapping her Foot and trying to hold in, but she was Sore as a Crab, for she loved her Lambkin.

Finally she could not stand it any longer, so she rushed to the Boudoir and produced from a Bureau Drawer the Tintype which Papa had slipped to her just 8 weeks before they faced the Justice of the Peace at Akron, Ohio.

It was the True likeness of a Male Hyena whose Hair was combed low on the Forehead into a gummy and passionate Cow-Lick.

He had one of those Gates Ajar Collars that was primarily intended to display the Adam's Apple in all of its naked Splendor.

The Shirt was ruffled the same as the Lingerie in an Advertisement, and the Watch Chain was of Human Hair, which is now regarded as a Penitentiary Offense.

The Boutonniere was a Carnation against a Leaf of Geranium with Tin Foil below, which is no longer being done in the Best Families.

The form-fitting Trousers led gradually down to Congress Gaiters pointed on the End like Nut-Picks.

Father took one Peek at Exhibit A and then gave Albert a V and told him to hunt up some of his Boy Friends and take them to a Matinee at the Orpheum.

MORAL: Whatever you may be, your Parents were more so at the same Age.