From the Theater Vault Dept.: I would have loved to have seen the revue “Cole” in its original Mermaid Theatre run; I saw “Cowardy Custard” there and was bowled over. But I’ve seen “Cole” at other venues over the years, and the 1985 production I wrote of below remains one of the best. And I’m reprinting the entirety of that column, so you can see what was happening in Albany-area theater back then.

WITH JUST THE FIRST TWO SHOWS of this season, Heritage Artists at the Cohoes Music Hall already has seen attendance surpass that of all of last season. It’s an auspicious start, and there’s the promise of even more recognition if the rest of this season is as terrific as the current, just-opened offering: a musical revue entitled “Cole,” giving us a tour of the songs of Cole Porter. 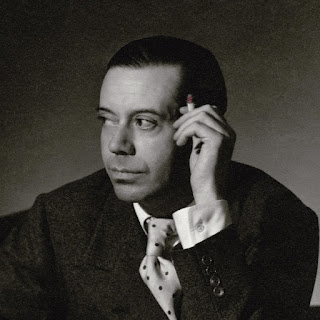 Originally devised for London’s Mermaid Theatre as a follow-up to its similar tribute to Noël Coward, it’s designed for an intimate setting, which the Cohoes Music Hall provides. In fact, that hall really is the local equivalent of the Mermaid.

The talented cast of eight – four men and four women – takes us through what’s almost a nonstop songfest. A biographical sketch of Porter links the segments, but it’s minimal, which is fortunate: it’s floridly overwritten. Another wise touch was to resist presenting the songs in chronological order; the best-known ones are scattered throughout, some the centerpieces of well-staged ensemble or dance numbers.

The 48 songs are divided among eight sections, roughly corresponding to periods in Porter’s life. The highlight is the breathtaking sequence that begins the second act. Taking its title from the song “What Is This Thing Called Love?,” it is a continuous row of love songs helped tremendously by the deft characterizations the actors assume. Speaking of “Begin the Beguine” (at 108 measures, the longest POP song ever written), Alec Wilder writes in The American Popular Song: “Along about the 60th measure I find myself muttering... ‘End the Beguine.’”

Evidently someone connected with “Cole” agreed with that, because the song is presented in a truncated form, which is unfortunate. I would hope that popular sentiment isn’t in agreement with Wilder, and urge Heritage Artists to restore the missing 32 bars.

It’s pleasant to complain only about so trifling a matter; the sparkle and energy of the cast and production resists much complaining. On opening night there was a problem hearing some of the singers intelligibly, especially the women: it’s a by-product of the nice fact that the show isn’t amplified, and one which certainly will be corrected right away.

“Cole” was directed and choreographed by Michael Hamilton; the cast is made up of Rick Farwick, Phillip George, Deborah Gerard, Christie Harrington, Caroline Jones, Brenda Maxwell, John T. McDermott, and Brent Winborn. What a joy it must be for them to be able to work with such fine material!

ALBANY-BASED STAGE II has for its January offering an area premiere: “Stage Struck,” a comedy-thriller by Simon Gray. Known for his droll sense of humor and compelling character studies, Gray’s more notable success include “Butley,” “Otherwise Engaged,” “The Rear Column,” and “Quartermaine’s Terms.”

“Stage Struck,” which had its premiere in London in 1979 and starred Alan Bates, tells the story of a man whose theatrical career (first as a stage manager, then as an actor) hasn’t gone. anywhere, and who contents himself with keeping house for his wife, a successful actress. He learns that she intends to leave him, as suggested by her psychiatrist, and decides to get back at them both.

There is a British suspense tradition that can’t seem to get enough weaponry and cadavers strewn around the stage, and this play fits that mold – and then some. Although stage limitations precluded some of the gorier effects called for in the script, director Michael Steese has done a splendid job in giving us both the humorous and macabre aspects of the story.

Steven King has the taxing role of Robert, the frustrated husband; there is a special style of speaking necessary to make Gray’s lines work, and King uses it beautifully. Carol Jones, as his mercurial wife, is equally convincing as the conniving actress, falling into amusing histrionic excess while playing games with her husband. Steve O’Connor plays Herman, lodger in a nearby cottage, who keeps bursting onto the scene to complain of his own problems. Joseph Phillips, as the psychiatrist, rounds out the cast; a highlight in his deft characterization is a speech about coming to grips with dying.

The staging is effective and well-paced, although the last part of the second act might play even better with the speed increased a bit. What’s lacking is a British audience that would react to the catch-phrases and in-jokes peppered throughout the script. Nevertheless, the auditorium at Capital District Psychiatric Center isn’t very large and there’s no reason why a fine production like this shouldn’t pack it each night for the rest of the play’s run.

THE FAMOUS PEOPLE PLAYERS play Proctor’s Friday at 8 P.M. You saw them in the TV movie “Special People”; now’s the chance to see in person this group which presents a version of Black Light Theatre in a charming array of impersonations ... Tonight (Thursday), the Magnificent Mazowsze, 115 strong, singing and dancing at Proctor’s in a return engagement. Their 1982 performance of Polish song and dance was a big hit. Proctor’s tickets are at the box office, Drome Sound, CBO outlets, and Carl Co. stores ... Beth Henley’s “Crimes of the Heart” opens Wednesday at Albany Civic Theatre.