From the Food Vault Dept.: I ran into Joseph Soliman while food shopping today (I buy in large-enough quantities to justify going where the restaurateurs shop), who assured me that his excellent restaurant, Sage Bistro, is still going strong. I’ve never had a disappointing meal at either of his establishments. My Metroland review of Sage Bistro is here, and I’m accompanying it now with my two reviews of his Hidden Café, which is where we met, and which, I should warn, has long since closed. Go to Sage Bistro for the kind of meal described below.

GAZE THROUGH THE LARGE WINDOWS at the front of the restaurant and you see ... a white wall on the other side of an alley. It’s hidden, all right, tucked into the apex of the two major wings of Delaware Plaza. 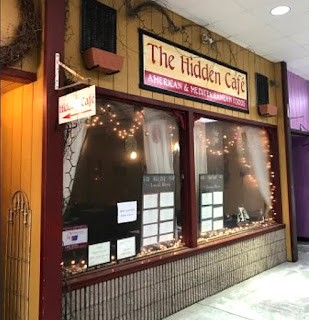 The Hidden Café opened less than two months ago in a space that “unassuming” hardly begins to describe. A dozen tables, a long bar, a register near the door, white walls, few decorations – it’s a place in the throes of first life, but it’ eager and the food is good and dinner business, the owner assures me, is already taking off.

The lunch menu leads with the welcome surprise of omelettes ($4.25-$5.25), with even more welcome variations. The house omelette, for example, sports garlic and mozzarella, seasoned with cumin and cilantro; the “oinking omelette” has bacon and ham. Burgers, wraps, salads and specialty sandwiches are all priced under $7, and scaled-down versions of dinner specials also are available.

Those burgers, wraps and salads are repeated on the dinner menu, some priced slightly higher to accommodate more side-dish offerings. Among the specialty sandwiches are grilled chicken breast with pesto sauce ($8), Reuben ($7) and grilled veggies (onions, carrots, portobello mushrooms and zucchini, among other ingredients, $7).

But it was the listing of Mediterranean dishes that grabbed my attention. Spanakopita, falafel, souvlaki – the classics are here and they’re $8 apiece. Start ordering, folks.

It was a largish party with which I visited, once again my wife and kid, my friend (and midwife) Vicki and her infant child, and friends Susan and Steven and their child. Had I seen a party like this arrive where I was dining five years ago, I would have muttered silent curses and fled. This is nature’s revenge.

We arranged ourselves around a pair of pushed-together tables and struggled to put together an order, which becomes exponentially more difficult with this many adults and children involved. Beverages were chosen – no liquor here yet, although a wine and beer license is in the works – and ideas were tossed around, culminating in a good sampling of the Mediterranean side of things.

Chef-owner Joseph Soliman hails from Egypt. He is almost apologetic about the fact that he spent only a couple of years in the restaurant business before this, “But I’m the one who cooks at home all the time.”

He has no reason to be modest. Everything we tasted was terrific, starting with the Mediterranean Trio (this one’s only $7). I forgot to specify that I wanted it as an appetizer, so it arrived, after bit of a wait, with the entrées. Two of them, in fact – another plate went to the far end of the table. With plenty of sliced, warm pita bread to accompany it, you can dig in to a lemony, fluffy version of hummus, one of the best I’ve tasted. Baba ganouj, an eggplant-based paste, had a nice hit of spiciness, and a tzatziki dip (yoghurt and cucumbers are primary ingredients) gave a contrasting and welcome sourness that was very refreshing.

Steve ordered spanakopita, a mixture of chopped spinach and feta cheese, “warped in phyllo dough,” as the menu declares, sliced into easy-to-eat portions. It’s a simple dish, but profoundly buttery and thus rich – even Steve’s hearty appetite was challenged. A Greek salad garnishes the plate, offering more feta amidst an otherwise straightforward mix of lettuce and carrots and olives and such.

Vicki had alerted me to this place based on her previous happy experiences here; she had worked her way down the menu to the pasticcio, a smallish souffle dish of penne baked in a meat sauce and topped with what’s listed as a “pashmeel” sauce, which turns out to be a béchamel: milk-based, rich and creamy when heated with roux. It’s peasant fare, relying on big flavors that were well in evidence here. A salad is served on the side.

My spouse is a falafel fan, and we enjoy it at home when I think to get the ingredients (chick peas, parsley, tahini, the right spices). How nice to find it so expertly prepared, with far more of a flavor range than I’ve ever given the dish. Leeks and dill are added to the mix, and it’s served with a tahini sauce, lettuce and slices of onion, cucumber and tomato. Although fries are the default side dish, Susan had it changed to a pasta salad.

Lily, meanwhile, decided she needed an entrée of her own, and poked at a shish kebob of chicken breast pieces with chunks of onion, green pepper, tomato and mushrooms sharing skewer space. Straightforward, tasty and filling, served over rice – but she was so busy at the hummus that the kebob came home and became both breakfast and lunch the following day.

I chose a chopped Angus sirloin dish: kufta, in which the seasoned meat strips are skewered and grilled and served in a style similar to the falafel. The cilantro-rich seasoning also sported cumin, which imparted a deeper flavor than your standard-fare burger. I passed on the proffered fries in favor of rice as well.

By the time I was finishing, each kid had long since persuaded a parent to venture outdoors. Those of us who remained had the leftovers packed and joined them.

This is a small operation, so service gets slow when customers pile in; Soliman is looking forward to increasing staff size as more people discover the restaurant. At this point, while it’s still somewhat hidden, it’s the best bargain in the area.

ONE OF THE NICE THINGS about my job is my level of veto power. A couple of weeks ago I joined some friends in a dining-out venture, and when I murmured my dismay at their choice of restaurant, they immediately insisted they’d switch to the place of my choosing. We were in Albany; it had been a couple of years since I’d last visited the Hidden Café; thither we went.

I was surprised and impressed by the transformation. It’s still, as befits its moniker, squeezed into an unseeable corner of Delaware Plaza; the space still bears the lunch-counter look of its original occupant. But chef-owner Joseph Soliman has continued to improve both the ambiance and the menu, fine-tuning the flavor of the place as his clientele grows.

He was born in Egypt but worked for many years on the other side of the door in some chichi Long Island restaurants. He taught himself to cook by copying the dishes he served. “First time I’d try one: not so good. Second time: better. By the fourth time: excellent. That’s how I did it.”

When he opened the Hidden Café three years ago, he featured a variety of Mediterranean dishes, items like spanakopita, falafel, souvlaki and a variety of kebabs. But the menu has evolved a more continental face. “I want to cook what pleases me,” says Soliman, “and what pleases my customers.”

Reduce cooking to its fundamentals and you find any number of opportunities to give a unique character to a meal. A recipe may always call for capers and lemon juice, but you decide the quality and amount of those ingredients; you also decide when to add them and what other flavor components might be welcome.

Soliman’s cooking shows the consistent personality of a chef who has reinvented the recipes he likes to suit his preferences. Garlic, for example, is a very good friend. It shows up, sautéed, simmered or roasted, in many an item.

It’s roasted in the seafood Levernesse ($19), which sweetens the combo of sautéed shrimp and scallops in a tomato sauce also flavored with olives and capers, all of it served over rice.

Chicken dishes dominate the entrée list, priced from $14 to $18. If you like it paired with potatoes, the chicken Mediterranean adds a delicious combo of roasted red peppers, artichoke hearts and portobello mushrooms; for a pasta pairing, the chicken in chicken Sophia is tossed with spinach and garlic, sun-dried tomatoes and mozzarella cheese in a tomato-cream sauce and served over rigatoni.

Philly’s flat iron steak ($18) is a bargain priced serving of this boutique cut, paired with a blue cheese cream sauce that’s redolent of roasted garlic. The mashed potatoes underneath only enhanced its richness.

My favorite was the lamb kebab ($18). The combination of the marinade and the charcoal grilling make this a fantastic presentation of my favorite meat.

Among the appetizers are the Mediterranean classics, like babaganouj, hummus, falafel and stuffed grape leaves. With little persuasion, they’ll put a bunch of those together in a platter that could well serve your entrée needs.

During one of my visits to the café, I witnessed what I call the “Olive Garden Phenomenon,” a problem that’s more and more plaguing our better restaurants. When you work in a professional kitchen, you develop an inner timer. Thanks to my years in the kitchen, I know when an entrée is ready. It’s become a joke when I dine with my family: I can predict within seconds when the meal will appear when the restaurant is running smoothly.

Too much lag time means the kitchen or floor staff is in the weeds; too little time and your food probably emerged from cryovac – and that’s the food source of many a chain restaurant. The result is a clientele with an unrealistic sense of the wait time for food.

Let me reiterate a point I can’t make too often: There’s no such thing as a “30-minute gourmet.” Sure, you can sell cookbooks and TV shows by pandering to the impatient, but those who would feed you too quickly have no wish to feed you well.

Thus the OGP. I watched a nearby party place an order, fidget silently, and in what seemed like no time at all, begin to complain, first to one another, finally to the server. With utterly unrealistic expectations, their dining experience turned unpleasant. And it was self-inflected – with the help of the profit-hungry fast-food industry.

The server spoke valiantly in defense of prep and cooking time, and I hope the result calmed the diners – but they were too busy stuffing themselves to show reactions.

Soliman’s food ought to be enough to quell that level of anxiety. He’s offering meals crafted around fresh ingredients, with enough of a Mediterranean sensibility worked in liven the flavors in a healthy way.

It’s a friendly place with busy servers who nevertheless are as attentive as possible (and Soliman invites anyone interested in working the floor to get in touch with him). He’s obviously bested the canard that you can’t have fine dining in a strip mall.

Sure, he should be in a prestige location in downtown Albany or, better yet, Saratoga. He should have tuxedo-clad servers serving higher-priced food. He should get out of the Capital Region altogether and find a place where the clientele knows that real food takes time to prepare. But he’s staying here, with his family and friends, and we’re the ongoing beneficiaries of this kindness.