From the Literary Vault Dept.: Did this piece actually run in Metroland? I can’t remember, and I’m not curious enough to go digging through my attic-clogging stacks. But I enjoyed Thomas Pynchon’s Vineland enough to write two reviews of it. One ran in the Schenectady Gazette; it’s reprinted here. The one below would have run under the pseudonym I used at Metroland for while to hide my activities from a witless editor at Albany’s long-defunct Knickerbocker News, who insisted that I write for his paper exclusively (even through they were paying me the grand sum of twenty bucks for the once- or twice-a-week notices I filed).

SOME CRITICS HAVE BEEN HUFFING AND PUFFING in the papers that Vineland isn’t the novel they were expecting from Thomas Pynchon, especially after waiting 17 years. It’s stirred up interest enough among readers, however, to shoot it up near the top of the best-seller lists, which is a credit to this mind-jarring novel. 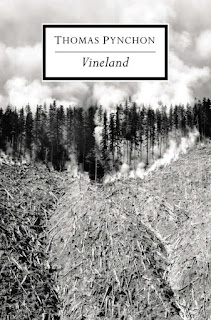 Is it important to go on record with once-and-for-all opinions? That’s a handy critical crutch but it tells you more about the critic than about the work in question. So I’ll restrain myself from taking pot-shots at posterity and simply say this: Vineland is a hell of a terrific read.

It’s a roller-coaster of a book, which you expect from the author, but it goes beyond mere bouncy thrills. It’s an exquisitely crafted work, layered like a gooey French pastry. You bite through those layers in the course of digesting the book, and each holds another sweet – or sometimes tangy – surprise.

Foremost of the delights is Pynchon’s screwy sense of humor. It comes through in everything from character names (Brock Vond, Frenesi Gates) to lunatic plot twists to the insanest of puns (my favorite is a dizzying jingle for a lawn-care specialist calling himself the Marquis de Sod, part of a TV ad ...


“ ... in which the Marquis, his wardrobe ... an authentic eighteenth-century costume, might carry on a dialogue with some substandard lawn while lashing away at it with his bullwhip, each grass blade in extreme close-up being seen to have a face and little mouth ... Presently the grass would start to sing the company jingle, to a, by then, postdisco arrangement of the Marseillaise –

Depending on how far back you like to pull your camera, you can see in Vineland any number of allegorical parallels, beginning with the Viking-heritage title itself. But where Leif Ericsson found wine-benevolent agriculture, the Northern California setting of this novel is resplendent with marijuana.

Zoyd Wheeler, who consumes and helps cultivate the stuff, is being persecuted by an old nemesis, DEA agent Hector Zuniga. Which may herald the reappearance of special prosecutor Vond, once involved with Zoyd’s ex-wife Frenesi ...

There’s paranoia a-plenty as the labyrinthine plot unrolls (explodes, really), but the novel also tells a compelling story about the history of political activism in this century, tipping its literary hat to such icons as Joe Hill even as it follows a group of ‘60s radicals into the mellow, Reagan-infested ‘80s as they’re forced back into action.

If you’ve wrestled with V. or Gravity’s Rainbow, two large novels by Pynchon, you know that he creates an entire universe that’s bounded by the narrative style of each of his books. They quickly cease to be linear experiences and blossom into a visceral activity in which the reader must actively participate.

Vineland is a little less exhausting than its predecessors, a little more gleeful. It’s lean, requiring the brilliant use of language that characterizes the novel. Gravity’s Rainbow made me suspect that Pynchon is as omniscient as a mortal can be. Vineland confirms it.