From the Food Vault Dept.: An entertainment arena opened in Albany, NY, in 1990. Originally monikered the Knickerbocker Arena, fiscal sponsorship deals have lured it through different names. I wrote a series of articles about it for the Schenectady Gazette in advance of its opening, two of which are here. Here’s an entertaining third, which was supposed to be about the foodservice at the arena, provided by what was then known as ARA Leisure Services, and now is the behemoth Aramark, which provides the overpriced, mediocre food at the Saratoga Performing Arts Center, much (if not all; it’s hard to find confirmation) of the SUNY college system, and many other such places around the world. Here’s the note I attached to the piece when I submitted it: “The outfit providing the in-house food at the Knick Arena was singularly uncooperative in providing information, never returning calls and getting downright belligerent by Friday. I offer the following as a much more enjoyable substitute.” The lede, by the way, is complete fiction.

WHEN MY FATHER FIRST TOOK ME to the Saratoga Racetrack I was much too young to appreciate the subtleties at work. On the one hand there was the beauty of the racehorse itself to be considered; on the other, Dad's deft maneuver to get out from under Mom’s financial supervision and fling a few dollars luckwards – all in the name of my education. 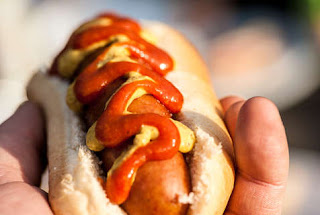 If you want to dine at the Knickerbocker Arena, you’ll have to go outside and patronize one of the tenant restaurants (see accompanying article) or any of the many surrounding eateries. But if you just want to nosh, ARA Leisure Services is providing the same kind of counter food they offer at the Saratoga track and the Albany airport.

We all know that it’s stuff that would send a Cordon Bleu chef into a horrified swoon, so lacking are the snacks in any aesthetic or nutritive value. So what is it that makes the hot dog and its fast-food brethren so popular?

At its best, the hot dog is a wurst, a soft sausage of pulpy meat products sheathed in a skin of gut. “Frankfurter” gave way to “hot dog” early in the century – and some thank cartoonist Tad Dorgan, who used the colloquial term either to signify its resemblance to a dachshund or to support the rumor that the sausage actually was made of dog meat.

Obviously, there was nothing in the rumor to quench the burgeoning popularity of the hot dog. Descended from the art of charcuterie (literally “cooked meat”), which celebrated all parts of the pig, hot dogs are dismissed by French food writer Jane Grigson as “tasteless concoctions in plastic packages which you have in the United States, I am told.”

She needs to go to a ball game.

Hot dogs are grandstand food. They’re portable, for one thing. You wouldn’t want to eat a veal parmigiana that had been passed from hand to hand along a row of fans, but a hot dog easily withstands such treatment.

They satisfy an American craving for things that are quick and snappy. A hot dog offers the briefest of meals, so it’s easy to eat many of them at a time. There’s a singularly varied taste experience, beginning with the soft prelude of the white-flour roll before hitting the brief resistance of the skin. Then that burst of moisture and warmth as you seize your first mouthful.

One of the secrets of the hot dog’s success is the way the condiments land on the palate. Sure, we’re fighting gravity when we pile mustard and relish, sauerkraut and meat sauce on top of the dog’s back, but this also allows that marvelous delay as all those flavors roll down the inside of the mouth before hitting the tongue.

I’m convinced that the hamburger is at best merely an alternative to the hot dog. Consider it: it’s much more obtrusive with its obviously meaty flavor. It’s also condemned to eternal association with ketchup, a lightweight sauce whose popularity endures despite the heavyweight competition of quality mustards. I’m just radical enough to prefer mustard on my French fries, which gets me strange looks at diners and stands.

Give me an order of them just this side of translucent and a couple of dogs on the side. Tall cup of soda and a fistful of condiment packets and show me to my side. I’m ready to watch anything.