From the Actual Vault Dept.: For many years I was quite happy to write to order, so long as the checks came in, and I produced a number of pieces for the dry-as-dust Capital District Business Review. Here’s one that presents a very nostalgic picture of the area’s banking industry just before all the interstate banking laws were changed. Wish I’d made a few of the investments suggested below!

TIME WAS WHEN INVESTING IN A BANK was something done by nervous elders looking for security. It was absolutely safe, promising a small, steady increase in earnings. 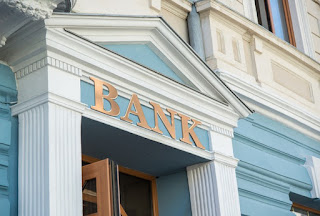 But in this decade there have been a slew of banking deregulations that have changed small-town banks into branches of big-city conglomerates, and not without substantial profit for savvy investors.

“If you had bought 500 shares of Citizen’s Trust of Schenectady back in 1950, it would have cost you $500. Today, you’d have KeyCorp stock worth $125,000,” said Michael Brockbank, who owns Brockbank Investment Research, an investment advisory firm in Schenectady.

The history of that stock is a history of the changes characterizing all banks. Citizen’s Trust became National Commercial Bank, which became Key Bank N.A., a part of KeyCorp.

“The dramatic rise in value only occurred in the last ten years as we’ve entered an era of banks acquiring other banks and going on to become holding companies,” Brockbank said.

Publicly owned banks in the Capital District now offer the potential for investments as lucrative – and risky – as any others. And the consensus among advisors is that we may be in the right place at the right time to realize some profits.

Northeast Savings, which is based in Hartford, Conn., grew out of Schenectady Savings Bank FSB.

“Generally speaking, the super-regional commercial banks are going to be your best investment, because they have the most potential for increasing their value,” said Robert Clore, a stockbroker who specializes in banks at Shearson Lehman Hutton Inc. “I recommend to my clients that this is an absolutely perfect time to be buying many of the local bank stocks. Right now the stocks are undervalued, and some prices – KeyCorp is a good example –  have been depressed. If you buy now, in the next two to three years you should do very well. I see little downside risk.”

At Prudential-Bache Securities in Albany, however, Judy Bovitz sounded a more cautious note. “Considering local banks as a whole, I think two years ago they were really the places to be in terms of progressive investments. Now they’ve slowed down. Things like the losses of the third-world countries affected all banks, meaning places like Chase Manhattan and Citibank as well as the locals.”

KeyCorp is singled out as an institution that largely has shielded itself from the problems of less developed countries (LDC) debt. A First Albany Corp. report issued two months ago noted that its only LDC expenditure is a credit to a Mexican oil company incurred through an acquisition, and that KeyCorp has a policy of not granting loans to foreign governments or borrowers.

Don Kauth, banking stock analyst for First Albany, sees the local banks doing well as a group.
“There isn’t any [bank] I’d look at and say is a dog, although Northeast Savings has had some problems lately. It should have some solid fundamentals, but the stock has been pummeled lately by changes in management,” Kauth said. “The tangible book value per common share is now negligible at best, despite a reported $40 book value.”

But he moderated his opinion by observing that bank stock prices are generally somewhat depressed. “That ties in with the current economic cycle: If interest rates continue to climb a little bit, investors wonder how much longer loan growth can continue. If it takes a downturn, you have investors worried if the assets will suffer,” he said.

“Banks don’t seem to be faring all that well in the marketplace,” said Timothy McGinn, chairman of McGinn, Smith & Co. Inc., an investment securities house. “But you have to look at what is faring well in the marketplace. Not much.” McGinn sees KeyCorp as a particularly attractive candidate. “It’s the largest of the locally controlled situations, with a stock price stuck in the $21 range. It pays a nice dividend, sells at a modest price-to-book ratio, and management over the years has been strong and has done some good things.”

McGinn examines a bank not only by its paper but also by the personalities involved, and credits TrustCo’s chairman, Robert McCormick, as one reason for the attractiveness of the Schenectady Trust Co. “It’s running 15 to 16 percent on equity, and the stock trades at around $29 to $30. Home & City is trading at around $20 to $21, selling at about two-thirds of its book value. They’re not earning tremendous amounts of money, probably because of the slowdown of real estate activity in this market. So the return on equity is not what they’d like to see, but at two-thirds of book it’s not a terrible thing to own,” McGinn noted.

“And National Savings is a similar story. It’s a little smaller, but selling at about the same price with the same book value, driven by much of the same activity you see at Home & City,” he added.

Bovitz, of Prudential-Bache, suggested that some of the local banks would be good yield vehicles, “but they’d be something to trade out of eventually. I don’t see them as any kind of an aggressive trade center.”

“Banks in the area reflect the generally good economic environment,” First Albany’s Kauth said. “Arrow and Evergreen are doing very, very well, and they too are attractive acquisition candidates.”

Fleet/Norstar, which is twice the size of KeyCorp, has dual headquarters, in Albany and Providence, R.I. Investment adviser Brockbank said that Fleet/Norstar might be a reasonable purchase. “Despite cutbacks in local personnel, it looks like it’s becoming a bigger, stronger corporation.” Of the others he watches, he said, “Northeast Savings, at least on the local angle, doesn’t much have its act together.”

Eslin Brace, at Schenectady’s Stockade Investment Advisors, sees KeyCorp as “soundly run, paying good dividends – generally a good buy.” Considering other types of banks, he cautioned that a lot of the thrifts have problems.

The issue every analyst is watching is the matter of interstate banking law. “What most attracts the investor to bank stocks is the possibility of takeover plays. With the exception of  Fleet/Norstar, you have a number of possible targets,” Kauth explained. He sees the most potential for that coming from the New England states, but notes that New England-based acquirers can’t come into New York unless the specific states allow interstate banking with New York.

“We have a policy of reciprocating whatever the other state allows. In Connecticut, the basic reason for this was to protect the banks from the perceived clutches of the moneylenders in New York,” Kauth said. “But, as interstate laws opened up within New England, the banks there have been getting bigger and are in no position to feel threatened. They’re ready to go out and acquire other banks, but they’re jailed by their own laws.”

If the New England states open up to interstate banking, he said, “Upstate New York will be very attractive in terms of takeovers, especially mid-sized banks like Key, Home & City, and Schenectady Trust. Connecticut and Massachusetts are the states to watch, and I understand the Massachusetts Legislature is considering a bill that would allow interstate banking with a trigger date of Jan. 1, 1990. If that happens, you may see a lot of action.”

“Banks that are neither targets nor acquirers haven’t got much potential for increasing their capital, and that’s the way it’s been for decades,” said Brockbank. “In the last 10 years, however, everything has changed,” he said. “Now we evaluate a bank’s stock like many others, especially asking the question: Could this bank be a target?

“TrustCo would be a great buy as takeover candidate, but the administration there wants to be the acquirer, not the acquiree. If someone wanted to buy a bank now in this area, TrustCo would be a great bank to buy,” Brockbank said. But, he noted, TrustCo wants to be another Keycorp and do the buying itself. He said he thinks TrustCo stock is good and solid but has no short-term investment potential.

“The two local converted thrifts, Home & City and National Savings, are not in any acquisition stages,” Brockbank said. “That gives them low price multiples, discounting earnings to a heavy degree. If Fleet could buy the thrifts, the stocks would go up. But they can’t do that yet. When that happens, things will change.

“So whoever is the sharpest person watching regulatory practices is the person who’ll make the money off that.”