LEONARD BERNSTEIN’S “WEST SIDE STORY” wasn’t by any means the first time Latin-influenced music came to Broadway. Irving Berlin’s “Watch Your Step” featured Vernon and Irene Castle dancing the scandalous tango; the “George White Scandals of 1922” included Gershwin’s “Argentina” (a bolero), and Cole Porter’s “Begin the Beguine” was part of his 1935 “Jubilee.” But those – and many, many subsequent offerings – either had no Latin context or, as with Porter’s “The Gypsy in Me” and Harold Rome’s “Don José of Far Rockaway,” were what we’d now understand as condescending. 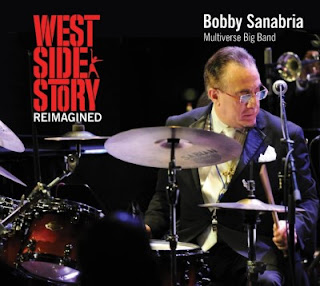 But “West Side Story” had the temerity to put full-fledged Latin characters in leading roles. Its portrait of race hatred remains as poignant (and true) now as it did in 1957, as the many productions staged this year, the centenary of Bernstein’s birth, have proven.

Two years after the show’s debut, André Previn’s trio put out a jazz recording, inspiring other jazz greats to tackle the score in the early 1960s, among them Cal Tjader, Stan Kenton, Dave Brubeck, and Oscar Peterson. Songs and arrangements from the show have since been recorded by the likes of Earl Hines, Richie Cole, the Labeque sisters, and Joshua Bell; and there are the compilations, like “The Songs of West Side Story” (1996), which offered an array of terrific covers, including Aretha Franklin singing “Somewhere” and Little Richard’s “I Feel Pretty” (which will never be topped).

What this score has really needed, however, is an all-Latin (or all-out Latin) rendering, as you’ll understand when you hear Bobby Sanabria and the Multiverse Big Band in “West Side Story Reimagined.” Recorded in performance at Dizzy’s Club Coca-Cola at Manhattan’s Lincoln Center in November 2017, some of the proceeds from the two-disc set will go the Jazz Foundation of America’s Puerto Rico Relief Fund.

And there should be a goodly amount heading that way, because this is a knock-your-socks-off version of the songs from the show. South Bronx-born Sanabria is a legend in the jazz world, a longtime proponent of Latin jazz (he helped reinstate it as a Grammy category, and has been nominated for the award seven times), a tireless performer (as you have to be when you lead from a drum set) and an instructor at the Manhattan School of Music and the New School for Jazz and Contemporary Music.

He’s got 21 players working this band, in addition to a clutch of skilled arrangers, and the energy of a live performance to drive the excitement. The score’s famous tritone opens the set – whistled by the band – until finger-snaps and percussion launch the prologue. Brass and winds enter, and they’re tight, giving us just enough melodic information to propel the funk-flavored son montuno rhythm, a rhythm that doesn’t let up until a break about halfway through, when the lead-off rumble is portrayed with more of a swing feel.

There are no vocals per se in these performances, although Sanabria livens some of the numbers with brief introductions. “Jet Song” is ushered in with some phrases from its lyric, then we hear (and, with arrangements this vivid, see) the swaggering Jets, with their bop-infused solos, run into some Sharks and their bomba xicá-fueled chant in support of their homeland.

“Everything’s all right in America – if ... you are all white in America,” Sanabria says before the band launches into the most Latin of the show’s songs, “America.” But it’s transformed even more in arranger Jeff Lederer’s hands: “The arrangement features the Venezuelan rhythm joropo and the appearance of national anthems of a number of immigrant/refugee communities that are experiencing a renewed level of discrimination under the current administration.”

Rhythmic bounty abounds throughout, but “Gee, Officer Krupke” has more of it packed into one arrangement (by Jeremy Fletcher) than any other, and I have to quote from the liner notes again. “(B)omba xicá, yuba and plena (Puerto Ricans), a satirical waltz (Europeans), New Orleans second line and funk (African-Americans), bolero (Cubans), merengue/compas (Dominicans/Haitians), up-tempo swing (jazz musicians and their fans), and a low-down, dirty, slow drag shuffle (rockers, beatniks, hipsters, women of the night) all make their appearance.”

“Maria” is summoned by a chant of praise for Ochún, the goddess of love and beauty, while Tony’s passion is embodied by a chant for Changó, lord of the drum, weaving through an eight-minute meditation on the famous melody and the obsession behind it. Ballad transformations here are astounding: “One Hand, One Heart” becomes a samba, with Armando Vergara’s trombone and David Dejesus’s alto sax giving voice to the lovers, a technique carried into a surprisingly up-tempo “Somewhere,” here sung over a joropo beat.

Every song from the score long ago won justified fame; here they are again, familiar and yet as you’ve never heard them before, very much tuned to comment on current events. Whether you’re a fan of Bernstein or big bands or Latin music at its best – or all of the above, which is the most sensible – you’re going to love this set.

West Side Story Reimagined
Bobby Sanabria and the Multiverse Big Band
Jazzheads JH1231
Posted by B. A. Nilsson at 8:22 PM

Thank you for the insightful history and review.