From the Food Vault Dept.: Albany’s restaurant scene has evolved slowly. Forty years ago, only a single Indian restaurant could be found; soon after, a number of its employees quit and opened another. Neither is still in business, but I couldn’t begin to count the number you’ll find in the Capital Region now. Unfortunately, the one reviewed below also has left us – a Greek restaurant and a Thai restaurant are among those that took its place in the now-shuttered building. This is not to be confused with the Taj Mahal in Schenectady or the Taj in Glenmont, both of which I’ve visited recently and very much enjoyed. And I can’t recall who my dining companion was during this excursion twenty years ago, but he obviously wished to remain anonymous, and that condition shall endure.

THE FLAVORS REVEAL THEMSELVES in a cascade of contrasts. First there’s just a general pungency, followed by a vinegary pucker. Then the salt hits, conditioned by bay leaf and other herbs. This is the essence of achari, a type of Indian dish that includes some manner of pickle. 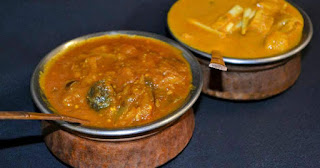 And not the pickled cucumbers we associate with that term. Pickles and chutneys can include a wide range of components, typically invoking dramatic contrasts of sweet and/or salt and sour. Chutneys are cooked, pickles are marinated, typically, in sunlight.

Lamb achari, which I ordered, has flavors that are intense without being devastatingly pepper-hot. The salt of the pickle dominates, so be prepared to pucker. You need the rice pilaf, which accompanies the dish, and a hunk of nan, the flat tandoori bread, to make the dish complete.

At Taj Mahal, four achari selections are offered (chicken, lamb, shrimp, beef) on a menu that includes other diverse specialties you won’t find elsewhere in the area: karahi dishes, cooked quickly in a type of wok; patia, from the cuisine of the Parsis, a Persian tribe that resettled north of Bombay who developed their own sweet-and-sour style; the aromatic stews known as nehari dishes, and a few jaipuri preparations, celebrating the desert cusine of Rajasthan with another type of stew.

And, of course, there are clay-oven tandoori dishes, rice-based biryanis and the usual array of Punjabi fare that characterizes most Indian restaurants.

The restaurant opened about three years ago at the corner of Lark and Spring Streets, in what is now the highest concentration of Indian eateries in the area. Mere blocks away are Shalimar, which has been there for a few years, and Gandhi, which is brand new.

It’s a little less austere in decor than the other two, although it’s still free from too much in the way of formal appointments. You enter into the dining room, with a small screen creating a tiny waiting area; beyond it are just over a dozen tables, with the lunch buffet setup against one wall.

I stopped by on a recent Sunday evening, my second attempt to dine there. The first time I arrived on a weekday afternoon at 4 and found the door locked, despite the restaurant’s posted hours claiming to serve throughout the day. “Oh, no, we close for one hour,” I was later told, “between four and five.” Now we know.

The place was deserted when my friend George and I were seated, which means that we really can’t gauge what the service would be like when there’s any kind of a crowd in there. The tables sport white linen cloths and red paper napkins, which is a silly way to save money. High overhead lights give an austere ambiance, moderated somewhat by burned-out light bulbs.

George was not at all dismayed by my plan to focus on spicy and unusual foods. “I come from a long line of pepper enthusiasts,” he assured me. “Wave a pepper in front of any Spelvin and he will salivate like a Pavlov dog.”

We started gently, with an order of mushroom pakoras. Real mushrooms, too, as opposed to the canned stuff, although they erred in the other direction by being tough and stringy. Pakora batter traditionally is made from chick-pea flour; in this case, whole wheat flour was used, giving the coating of the fritters a very different flavor and texture.

My lamb achari wasn’t as much to George’s liking as it was to mine, but he chose a chicken dish – chicken jhelum, named for a town in west Pakistan. Although coated with bright red tandoor marinade (the red is just food coloring, by the way), the meat is steamed and served with chunks of tomato and mushroom in a sauce that features tomato and red wine along with characteristic Indian spices. It’s pleasingly sweet with a little spicy kick to it, too.

Although the menu claims that rice pilaf and salad are included with the meal, the salad turned out to be a very disappointing handful of iceberg lettuce, browned with age, cucumber chunks and a tomato slice (mine was sliced from the bottom of the tomato). Not pretty.

Bread, typically, is a separate item, but the naan, priced at $2-$3, turns out to be a huge piece, big enough for two. We shared a piece with green chilis worked into it for additional spiciness.

I enjoyed a tiny cup of Indian rice pudding – more like sweet cream soup with rice – while George finished with a cup of Indian tea. Don’t come here looking for fine dining, but you should get your money’s worth as you explore some alternatives to what has become our area’s standard Indian fare. Dinner for two, with tax and tip and a beer, was $38. Metroland restaurant reviews are based on one unannounced visit. Your experience may differ.