From the Record Vault Dept.: As noted in the lede, there had been plenty of versions of this set in the past and the years since have seen many more. So, although this out-of-print set is fetching upwards of a hundred bucks today, there’s a more recent (but drab-looking) seven-disc version and a more-recent-still 25-disc version, and that’s not even mentioning the stuff he later recorded for Deutsche Grammophon.

RECENT HISTORY IS LITTERED with Bernstein Conducts Bernstein boxes and singles, but this new issue, a joint production of Carnegie Hall and Sony Classical, puts together all of the composer/conductor’s Columbia Records recordings, most of them with the New York Philharmonic. 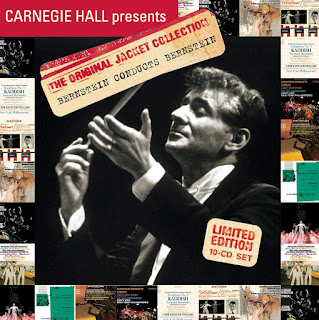 Although it’s part of Sony’s Original Jacket Collection series, which packs the ten CDs in cardboard miniatures of LP albums, these discs have been filled out beyond LP length, so there’s some creative fiddling with that original artwork.

Speaking of fiddling: Bernstein’s Serenade for Violin, Strings, Harp and Percussion after Plato’s “Symposium” has withstood its pretentious title and become a something of a repertory item, but here’s a chance to enjoy two Bernstein-helmed performances. First, and the first-ever recording, features Isaac Stern as soloist. He concert-premiered the piece in 1954; this mono recording was made two years later with the Symphony of the Air (the former NBC Symphony).

With the smash popularity of stereo a few years later, this work became one of many re-recorded in the new format. This time (1965), Zino Francescatti was soloist; along with the expanded aural spread and Columbia’s strange, thin audio quality during that era comes a more consistently focused violin performance.

Other pieces that get mono/stereo re-recordings are the ballet Fancy Free (suggested and choreographed by Jerome Robbins), with the 1956 Columbia Symphony (a pickup studio orchestra) recording edging the 1963 NY Phil version for dynamicism, and the Symphony No. 2, “The Age of Anxiety,” an Auden-inspired 1949 work whose original recording used piano soloist Lukas Foss for but one measure. Pianist Philippe Entremont suggested an expansion of the piano part, and is thus heard in the 1965 stereo version.

Another period piece, so to speak, is Bernstein’s Symphony No. 3, “Kaddish,” whose over-the-top theatricality was rewritten with more restraint subsequent to this 1964 recording: But it’s still a worthy museum piece, with the composer’s wife, Felicia Montealegre, declaiming the fiery text.

Other concert works include the Symphony No. 1 (“Jeremiah”), Prelude, Fugue and Riffs (with Benny Goodman), Facsimile and his other Jerome Robbins ballet collaboration, the surprisingly atonal Dybbuk.

The “On the Waterfront” Suite is derived from Bernstein’s only film score, and of his several musical theater pieces, he conducted only “On the Town” for Columbia – but it’s the definitive recording, far better than the remake he conducted for DG. “West Side Story” is represented by the popular suite of Symphonic Dances. And we get a rousing overture from “Candide.”

Bernstein’s works for voice remain affecting even when they weren’t written for the Broadway stage, and “Trouble in Tahiti,” a one-act chamber opera, is a trenchant example, beautifully sung by Nancy Williams and Julian Patrick. Also included are the “Chichester Psalms” and the once-controversial Mass, with a young Alan Titus as Celebrant. And there’s a bonus of two song cycles (“I Hate Music!” and “La bonne cuisine”) with the composer piano-accompanying Jennie Tourel.

The booklet includes a too-brief overview by Humphrey Burton and then excerpts that claim to be (but aren’t always) from the original issues. And hang onto that book: you’ll need it for the CD track listings.

Bernstein yet again recorded much of this material for Deutsche Grammaphon in his post-NY Phil years, but my money is on this set: he’s younger and more vigorous here. Although all of this material has been available on CD (some of it expensively out of print), and even in the same groupings, this is a comparative bargain – and a great gift. For someone like me, who collected the records this, there’s a pleasant aspect of nostalgia, even though I have to stop myself from hurrying over to flip the thing halfway through.