JUST WHEN YOU THINK you’ve heard everything, the slow movement of Beethoven’s Seventh starts to sound in a chamber-ensemble arrangement, and then soft voices creep in, singing, in French, “The night is dark ... let us go forth (to) wage war against the godless.” It’s a 19th-century cantata penned by the exiled Neapolitan Luigi Bordese, set to music by the composer who famously reversed his high opinion about Napoleon upon learning that the latter had declared himself emperor of France. 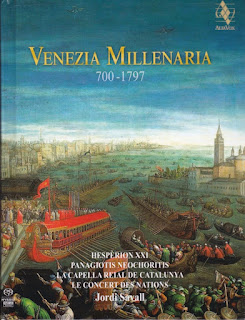 This oddball piece closes the new two-CD portrait of the musical beginnings of Venice, a place that long stood apart from other Italian cities. While this is unmistakably a Jordi Savall collection, it may have the most variety of material he’s ever presented. Which is very much the point, as “Venezia Millenaria” presents over a thousand years of material, from around 700, when the Byzantines began to inhabit it, to 1797, when Napoleon invaded, soon to cede Venice to Austria.

Savall recorded this material in 2016, and the musical portrait sparked a Carnegie Hall-based festival in February 2017 (coincident with Venice’s own Carnevale) at which Savall and his musicians performed, and which included lectures, museum shows, and other concert events  throughout Manhattan.

We enter the city with its Byzantine founders to a solemn fanfare created from an eighth-century tune, and celebrate the creation of St. Mark’s Basilica (built around relics swiped from Alexandria) with an even more solemn Allelujah by Ioannes Damaskinos, and already we’re getting a sense of the variety that’s in store. 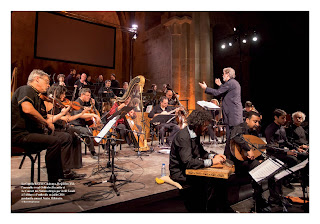 There are vintage discoveries here, and there are familiar tunes (like the Beethoven) coming back in refreshed guises, such as the lively Saltarello that commemorates Marco Polo’s return to Venice in 1295 and Mozart’s “Rondo alla turca,” a piano work dressed for the occasion by Savall to suggest how it would sound with actual Turkish instrumentalists taking part (it sounds even more uproarious than the composer must have wished).

How odd are the sequences here? A “sousta,” a Greek courtship dance, is followed by Gabrieli’s stately Ricercar VII, which takes us back to the Greek influence with an ominous-sounding chant
hymn by Michael Chatziathanasiou and then on to Persia for another high-spirited instrumental number. That paves the way for a hymn setting by Italian native Salamone Rossi, itself the link to one of the magnificent centerpieces of this array, Monteverdi’s “Combattimento di Tancredi e Clorinda” in a brisk but wonderfully affecting performance.

Other high points include Guillaume Dufay’s “Lament for the Fall of Constantinople,” from the 15th century and Clément Janequin’s “La bataille,” but the point here is as much their juxtapositions with contrasting works as with the performances themselves.

As with many of Savall’s previous multi-disc collections, this is presented in a thick multi-lingual book with many detailed essays, including a historical portrait of the city by John Julius Norwich, a look at the relationship between Venice and Byzantium by Judith Herrin, another about Venice and the Orient, and Sylvie Mamy’s overview of the city’s music. All of them are required reading to gain the fullest appreciation of what seems to be such an antic playlist. The book is illustrated with performance photos and historic images that serve as more than mere decoration: they help contextualize the disparate elements that made up Venice’s complicated history.