A Cure for Insomnia

Guest Blogger Dept.: We’re revisiting To Think of Tea! by Agnes Repplier, one of America’s finest essayists. As I wrote earlier, her keen mind and colorful, precise prose style ensured a successful career. As a child, she quickly memorized and recited the poems her mother read to her, but resisted her mother’s efforts to teach her to read, which she did on her own at the age of ten. Apparently an unruly child, at 14 she was kicked out of Eden Hall, the Convent of the Sacred Heart, and then asked to leave Agnes Irwin’s West Penn Square Seminary for Young Ladies three times because of her rebelliousness. By the time she was 20, her writing began bringing in enough money to help support her family. She died in 1950 at the age of 95 in her native Philadelphia. 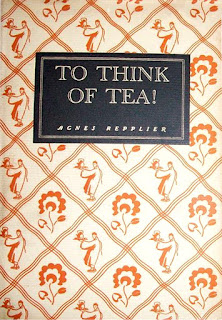 THERE WAS NO AILMENT – none at least known to the uninstructed seventeenth century – of which the new drink was not discovered to be the cause or cure. “Every remedy,” it has been pleasantly said, “has its appropriate disease”; but tea had so many appropriate diseases that, if we may believe Dr. Cornelius Bontekoë, of the University of Leyden, the moral as well as the physical world stood waiting for this great regenerator.

Dr. Bontekoë had the good or the ill fortune to cherish opinions which were well in advance of his day. It was his wont to express these opinions in terms which insured him opponents, so that he never lacked the cheerful stimulus of a quarrel. His treatise on “The Most Excellent Herb, Tea,” claimed for this “wondrous distillation” qualities more potent and more salutary than ever lay hidden in the Fountain of Youth. The author was no mean-spirited advocate of abstinence. He did not cherish tea because it cheered without inebriating. On the contrary, he denounced water in unsparing terms as being the most dangerous, as well as the least comforting, of drinks. Wine and rum were admirable in their way, but demanded temperance. They were ill-suited for continuous or excessive drinking. Tea and tea alone was innocent of offence. It warmed the stomach, cleared the mind, strengthened the memory, befriended learning, and lent substantial aid to the acquirement of wisdom and piety. It was, moreover, a supreme remedy for heaviness of spirit and for all melancholy humours. It promoted the sober and moderate cheerfulness which the Dutch rightly valued, and the stubborn courage which had won for them the apprehensive respect of Europe.

Above and beyond all other qualities, however, was the gift of sleeplessness which Dr. Bontekoë held to be tea's heaviest asset and most enduring charm. To him it seemed an excellent thing to conquer man's arch-enemy, sleep; to be able to spend long pleasant hours with friends, long profitable hours with books. What a help to students, even to the little students of the schools, who nod and drowse over their unfinished tasks! Tea as a substitute for the rod recommended itself to the kind doctor's heart. The one bred in the child's mind a natural hatred for his tasks; the other could be trusted to give him an alert good will to study.

It is pleasant to turn from the modern plaint of insomnia, from men and women alarmed by the comely presence of a tea-pot, begging for a cup of hot water with a slice of lemon in it, and nervously protesting that if they drank tea they would lie awake 'til morning; and go back in spirit to the brave days when sleep might be had for the asking, and when the real business of a scholar, as of a saint, was to keep himself awake.