MY INTEREST IN MOVIES as an art form was sparked by a TV viewing of “The Maltese Falcon” one afternoon. Although the film was cut to fit a ninety-minute ads-filled slot, its unique style, unforgettable cast, and surprising finish were enough to set me searching for more information about this movie. One of the first books I consulted (and I can’t remember its author or title) identified Sydney Greenstreet as a stage actor who specialized in playing butlers. How insufficient a description that turns out to be! 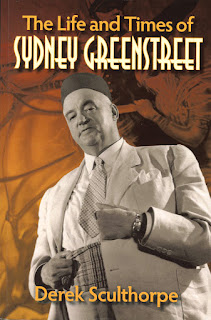 Greenstreet made his motion-picture debut in that film at the age of 61 in the unforgettable role of the chuckling, booming villain Kaspar Gutman. He was nominated for an Academy Award and worked steadily in Hollywood for the next eight years, appearing in 24 movies – although, as his fame skyrocketed, some of those appearances were mere cameos trading on his notoriety.

Yet there’s been a dearth of biographical material. Greenstreet has been included in several “Character Actors of the 1940s”-type anthologizes, and merited mention in books by or about Humphrey Bogart, Mary Astor, Joan Crawford, Alfred Lunt and Lynn Fontanne, and others. Why the lack? Peter Lorre, with whom Greenstreet appeared in several films, has merited book-length studies, and a joint study of the two by Ted Sennett offered a tantalizing amount of biography before spending most of its length on a film-by-film analysis.

That dearth is now redressed by Derek Sculthorpe’s info-rich biography, The Life and Times of Sydney Greenstreet (BearManor Media), which answers the above question. For all of Greenstreet’s remarkable accomplishments, he led a relatively unremarkable life. The precis of his story is promising – he made his professional stage debut in his native England at the age of 23 in 1902, and never stopped working. He soon relocated to the United States, where his acclaim steadily grew, and played everything from his beloved Shakespeare to contemporary plays and musicals. His specialty was comedy. There were a few butler roles along the way, but he achieved a pinnacle with the company of Alfred Lunt and Lynne Fontanne, where he was in premiere performances of such shows as “Idiot’s Delight” and “There Shall Be No Night.”

Had he continued that life, he would, like Lunt and Fontanne, have remained comparatively obscure. But John Huston saw him on stage as pre-production for “The Maltese Falcon” was underway, and persuaded him to join the cast.

This divides the well-written biography into neat halves. Sculthorpe had the help of Greenstreet’s granddaughter Gail, who supplied the many fascinating photos that illustrate the volume, and clearly did a substantial amount of research, searching through old newspaper clippings and studying yellowed programs. Even so, the details of Greenstreet’s earliest years remain sketchy. Lured by the exciting stories from one of his father’s friends, he traveled to Ceylon in 1897 to become a tea planter in what had been a booming business. He found himself incredibly isolated, his favored companion a volume of Shakespeare his mother had packed. When a drought destroyed much of the acreage, he abandoned that line of work and returned to England, which is when he began appearing in community-theater productions.

Once he turned professional, he never stopped touring. There seems to have been scandal in his life, so what anecdotes survive are fairly tame. Instead, it was the day-after-day of show-after-show, with Greenstreet among the most professional of any ensemble, always knowing his lines and cues.

But we do learn that he “was often the life and soul of the party and immersed himself in the social life of the stage.” He also was an avid player of golf and tennis, and “fiercely competitive in whatever game he played.” He spent many summers in Asbury Park, NJ, where he was deemed the best of the tennis players there, and it was there that he met socialite Dorothy Marie Ogden, daughter of the oldest undertaker in the state. They married in 1918, and their son John was born two years later.

Greenstreet’s stage successes continued – he worked with Hungarian-born sensation Mitzi Hajos and with the distinguished Minnie Maddern Fiske during this period – and he soon worked his way back to the Broadway stage (where’d worked several times before) in Jerome Kern’s musical “Roberta,” starring Bob Hope. But it was around this time that his wife began to show the signs of mental instability that put her in an institution at the beginning of 1933 and where, despite her husband’s hopes, she remained for the rest of her life. It’s a compelling piece of the Greenstreet story that was completely unknown to me (and, I’d venture to practically everyone), and even what’s known is relatively little – certainly not the celebrity-centric story that would splash across the headlines today.

Sculthorpe does an admirable job following the peripatetic Greenstreet through his forty years of stage success, and when Hollywood beckoned in 1941, we shift to a better-documented era that the author presents with a nice balance of background information and critical analysis. Although Greenstreet was typecast from the start, he brought superb understanding of characterization to his roles to make them multi-dimensional, and adapted his acting style to the camera with ease.

America was a play-going nation as Greenstreet’s stage career blossomed, and he transitioned to movies after that medium became the rage. This book, then, also serves as a history of popular entertainment during Greenstreet’s lifetime. If some of the more personal aspects of the actor’s life remain elusive, it’s probably because he wanted it so. Whatever else there is to know you’ll find in this engrossing book.

The Life and Times of Sydney Greenstreet
by Derek Sculthorpe
BearManor Media, 313 pp., $35/$25