MY DAUGHTER MADE HER RADIO DEBUT IN MANCHESTER not long ago, and how this came about is worth the telling. We begin in 1972. 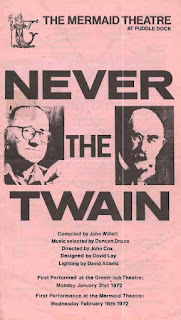 I was a high-school junior, freshly enamored of theater having made my stage debut with roles in Joseph Kesselring’s “Arsenic and Old Lace.” This was in suburban Connecticut, so it was only natural that the Theater Arts students should be invited to spend a show-going week in London in February. A mere $300 bought airfare, hotel room, and tickets.

The first show we saw was a musical version of “The Canterbury Tales.” I didn’t like it very much. Next was “Never the Twain,” a quirky mash-up of works by Kipling and Brecht, which was far more appealing, but by then I realized that some of my favorite actors were performing on the West End, and I forsook the rest of the scheduled offerings in favor of such fare – beginning with Alec Guinness in John Mortimer’s “A Voyage Round My Father,” which I wrote about here in 2012.


I was crawling around, looking up a show I was once in, when I came across yr blog, where you write about a trip to London in Feb 1972, and a theatre-binge you went on. Hah - I'd been in Canterbury Tales in 1970, which you thought crap, and was in Never the Twain, a Brecht-Kipling conflation you thought more interesting.


It was from Maurice Walsh, who also noted that he’d found some of my internet traces and discovered that he and I enjoyed performing similar repertory – songs by Flanders and Swann, Noël Coward, and neglected music-hall numbers, as he does in this video. Now based in Manchester, he’d spent many years teaching music in schools (he taught at a school where Auden taught). We became Facebook friends, which showed me that he had a wonderfully quirky sense of humor and an admirable social conscience. 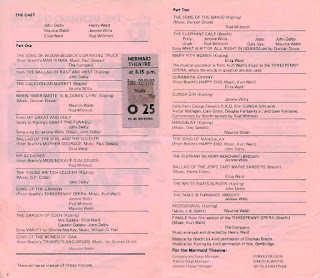 My post-high-school travels have taken me in a variety of directions, including stints as a radio announcer and programmer both at classical-music stations and, for a cheerful stint, at a daytimer playing big bands and jazz. But theater remains a central passion, so when Lily was young she spent a lot of time backstage – and, eventually, on the stage as well. This led her to pursue a theater major at Barnard College.

She therefore was thrilled to be chosen to spend an academic year abroad, and, as I write this, is in London studying at the Royal Academy for Dramatic Art, one of the most prestigious such schools. With spring break looming a couple of weeks ago, she accepted a friend’s invitation to spend a couple of days in Paris – how could you not? – but wondered what else she could do.

I suggested a run-out to Manchester. Not a place she’d otherwise think to visit, but I queried Moz Walsh (as he now styles himself) and he said he’d be happy to show her around. A charming AirBnB room proved to be not far from Moz’s house. And there was the bonus of that radio appearance.

“You mean you’d let her be with someone you’ve never met!?” a few well-meaning friends cried upon hearing this story. The world that theater people inhabit is a small one, especially when there’s music at its core. I had no qualms on that score. 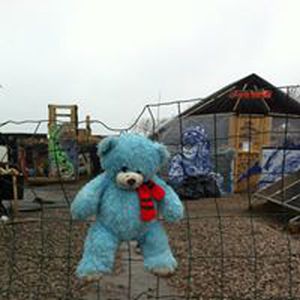 For the past couple of years, Moz has been hosting a weekly hour-long radio show on ALL FM, a volunteer-run station in Manchester. He calls it “The Innocent Ear,” and programs a dazzling mix of classical pieces and other styles that suit his fancy and the theme of the show. The show is so titled because he doesn’t let you know what’s coming, so that you may “come to the pieces without any preconceptions,” as he says. This is when radio is at its best, because it’s both an absorbing experience as you listen and it serves as a springboard to keep you from getting stuck in any particular genre. You can find a list of his recent shows here, with the ability to listen to each.

Moz’s shows might give you a mix of Aaron Copland, Arvo Pärt, Bill Evans, Carl Orff, and Amy Winehouse. It’s that diverse.

Lily arrived in Manchester, met Moz – and had one of the best times of her life. She got to see the city, which she found to be a vibrant, culturally hip place, and on the Friday of her visit she settled into the ALL FM studio with Moz for an interview that you can hear here. They reached me via Lily’s phone, which really didn’t work well enough for broadcast quality and so we gave that up (I’m amused that she covered by saying, “He had to go work with his bees.”)

She regretted that I wasn’t there to meet Moz, but we’re going to redress that as soon as possible. Meanwhile, I urge you to keep “The Innocent Ear” on your playlist. It’s a refreshing alternative to what otherwise aurally surrounds us.
Posted by B. A. Nilsson at 10:01 PM