THERE ARE JAZZ BANDS AROUND THE WORLD TODAY dedicated to presenting the music of the Swing Era (and many another jazz era), but to tackle the Artie Shaw legacy requires an extraordinary amount of talent and fortitude. Shaw himself did it in 1968 and during the 1980s, with Walt Levinsky and then Dick Johnson taking over for him in the clarinet department; when James Langton decided to put together a band to play Shaw’s music, he wisely turned to clarinetist Dan Levinson to provide the needed virtuosity. 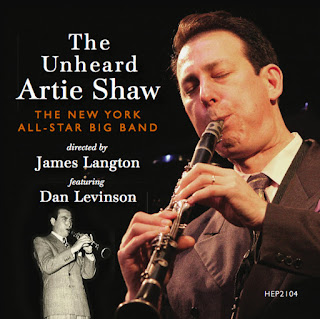 Levinson is as versatile a player as you’ll find on the jazz scene. Although he’s got a solid grounding in the world of swing, he can take you back to the earliest decades of jazz and make it sound as fresh as it must have seemed a century ago. He has collaborated with Langton on Benny Goodman tribute concerts, during which he sounds convincingly Goodman-esque, but going into Shaw territory requires a significantly different approach.

You can hear the result on “The Unheard Artie Shaw,” a disc recently issued on the Hep Records label, which has done a wonderful job of getting and keeping older jazz recordings in print – and they’ve done especially well by Shaw, issuing a number of his 1940s sides and airchecks.
The New York All-Star Band, a fifteen-piece ensemble, assembles the best of the city’s vintage jazz specialists, players you’ll probably also see working with Vince Giordano’s Nighthawks, which is a proving ground for material like this.

Listen to Levinson play “Leapin’ at the Lincoln” a typical Shaw flag-waver that’s credited as a Shaw original (although Langton expresses doubt in his detailed program notes). He’s got the Shaw clarinet sound: busy, a little brittle; curious, yet always in control. Where Goodman sounded comfortable and friendly, Shaw always seemed to be heading somewhere else and didn’t care if you followed. “Never Played Around Much” is another up-tempo number, this time from a manuscript in Shaw’s hand, and it exemplifies the style of the 1938 band: Richly textured ensemble work is presented with enough transparency to stay out of the clarinet’s way when the solo begins.

With one notable exception, Levinson and the other soloists have created their statements in the moment. What’s being recreated is the framework. “How Deep Is the Ocean,” an arrangement by frequent Shaw collaborator Jerry Gray, opens with a gorgeous statement from the reed ensemble before Jon-Erik Kellso takes a trumpet solo with a lot of Roy Eldridge in it. “I’ve Got the World on a String,” gives us Levinson as a balladeer before the Teddy Wilson-ish piano solo by Mark Shane.

If you know Shaw’s hit 1940 recording of  “Stardust,” prepare for a different feel to Gray’s 1937 arrangement, with no strings but plenty of bounce for such a lilting number. “In the Mood” was a Miller hit, of course, but the version here – arranged by its composer, Joe Garland (after changing the title from “There’s Rhythm in Harlem”) – maintains its infectious feeling and even manages to quote Berlin’s  “Marie.”

The classic “Royal Garden Blues” starts, in a Gray arrangement, as a straightforward call-and-response number, with Levinson soloing over some tasteful comping by Shane that soon gives way to band riffs. Then Jim Fryer takes a nice trombone solo as the riffs continue to build, and then build some more under Kellso’s subsequent statement. Given the tune’s chord progression, it’s not surprising that there’s a “One O’Clock Jump” feel to it, and that’s not a bad thing at all.

Shaw had the ingenuity to hire Billie Holiday as his vocalist, without the forethought to see what trouble that would cause a touring band. She recorded one number with the group that wasn’t released until decades later, but her influence remained even after she wisely left the ensemble. She’s saluted here with four arrangements crafted for her: “Them There Eyes,” “Trav’lin’ All Alone,” “You Go to My Head,” and “The Moon Looks Down and Laughs,” the first three of which she recorded elsewhere in different arrangements. They’re sung with appropriate Billie-ish-ness by the enigmatic Moanin’ Mary, who’s too good to lack an Internet trail and thus must be incognito.

Helen Forrest was the next best of Shaw’s canaries, and Molly Ryan (also a guitar talent here) sings two of her numbers. “Stairway to the Stars” proves that Ryan, like Forrest, easily can seduce you into a fantasy that love is nigh, especially when she caresses the phrase “high on the crest of a thrill.” And “And the Angels Sing” becomes a double tribute, because Helen Humes also did wonders with it.

That notable exception mentioned above comes at the finish of the disc. The first cut is a minute’s worth of Shaw’s “Nightmare,” the least theme-iest of all the Big Band themes but a good way to set a Shavian mood. The final cut is “Begin the Beguine,” the hit that put the band and its leader on the map, and here Levinson hews to the precedent of Shaw’s own solos, and does so with congenial élan.

Recorded sound is terrific, giving an infectious feeling of the enthusiasm that must have informed these sessions. Langton and company set themselves a tall order with a tribute to Artie Shaw, and pulled it off magnificently.