AS NIGHTMARES GO, it wasn’t all that awful. But, having no recall of any other nightmares I may have encountered during the past couple of decades, it was significant in the amount that it frightened me. And it was remarkable in being a two-part horror, separated by a period of wakefulness.

I must have come out of part two with a shout, because my wife groggily asked what was wrong. “A nightmare,” I said while struggling to keep the details in mind so that I could enthrall her with my suffering. I never got the chance. “Aren’t those nightmares awful?” she mumbled, and went back to sleep.

You get to hear it instead.

I was staring at some sheet music. That’s the first thing I remember. It was a piece I didn’t know, a vocal work, and I understood that I’d been brought in to sing the bass part. That I could hear an orchestra tuning up nearby meant that something – rehearsal, I hoped – was imminent, but as I hadn’t worked on the music at all I was feeling incredibly nervous. I can’t sight-sing. I’m pretty good with a tune once it’s been inculcated, but to pluck it off the page seems to me like witchcraft.
Where was the orchestra? I seemed to be in some kind of fancy anteroom – a green room, perhaps – but then where were my fellow singers? Because I certainly couldn’t be here as a solo performer. I stepped into a hallway to seek some answers, or at least a fellow human being, when the conductor walked by.

It was Herbert von Karajan. His carefully swept-back hair and military stride were unmistakable. He nodded familiarly in my direction and continued past me. My heart went into my throat.

Why Karajan? I’ve been a lifelong Toscanini acolyte, and my shelves tend to feature conductors in the Toscanini mold – Claudio Abbado, for instance, along with Fritz Reiner and Erich Leinsdorf. You’ll also find much by Munch, Monteux, Szell, and (early) Bernstein. But I’d be hard-pressed to put my hands on a Karajan recording.

Which is to say I barely think about him, never mind have any cause to dream about the man. Perhaps it was his reputation as an imperious autocrat that ramped up my fear of failing at my ill-defined task, never mind that he’s been dead for nearly thirty years. I’ve had theater-related anxiety dreams before – waiting in the wings to make an entrance while trying to remember which play I’m in, for example – but this one had a keener sense of terror attached. Rehearsal or performance, it was about to happen, and now I didn’t even have my music in my hand! I had to find that green room, but when I turned a corner I had stepped on stage, where Karajan and the orchestra waited.

That’s when I awakened. Woke up enough to need to pee, still feeling the dream-anxiety and seeing the steely expression on the conductor’s face. And then it was back to bed, back to sleep ... and this time I was in a house, my house, but a far more lavish place than that which I actually occupy. I was entering a vast, nicely appointed living room that seemed to have a party crowd within. And in the middle of the crowd: Herbert von Karajan! 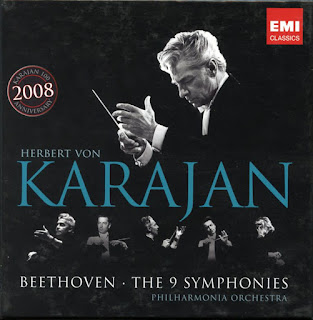 What the hell? Someone whose name hasn’t crossed my mind in years – twice in one night! This time it was a party I was hosting, and I felt a fresh panic as I wondered what I’d planned to serve my guests even as I tried to glimpse my wife in the gathering. She’d know. But I couldn’t find her.

Even worse, Karajan was studying my shelves of CDs, no doubt assuring himself that his own recorded work was represented. Shit. What Karajan discs did I have? I was pretty sure I had his “Lucia” with Callas, and wasn’t there a “Cosi” or “Marriage of Figaro” with Schwarzkopf? Or some Mozart symphonies? Or that “Falstaff” with Taddei? Wait! There’s that mid-50s Beethoven symphonies set he did with the Philharmonia – somewhere on a set of boxed sets, but I couldn’t remember where I put it.

And that’s about when I woke up again. I remember being very impressed with this house of mine and thus slightly disappointed to awaken in the familiar old bedroom. But I’d made enough of a noise to prompt a question from my wife, and that’s where we came into this saga. It may not be the house of my dreams in which I write this now, but at least I knew right where that Beethoven symphonies set could be found.
Posted by B. A. Nilsson at 11:35 PM