From the Food Vault Dept.: Thirty years ago I decided to pack it in as a restaurant reviewer. I’d done it for two years and the grind had worn me down. I took a two-year respite and was begged to resume – which I would do for another quarter-century. That’s a lot of pasta. Here’s my penultimate piece before that break, visiting an eatery that won a great reputation, closed after a couple of years, re-opened briefly as The Pasta Factory, and then gave way to an intermittent succession of bars, more suited to the neighborhood. As sometimes happened in my reviews, I tried a different approach, the intended whimsy of which now seems to me pretentious.

COME ALONG AND BE MY DATE for dinner: we’re going to Yates Street in Albany, a restaurant that has as its name its own address, and I’d like you to take a look at what makes this place so special. 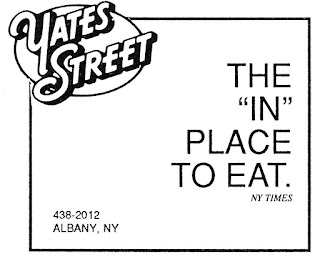 Its location, on an out-of-the-way but attractive street, reminds you of the little gems of restaurants tucked away on the side streets of New York, London, Montreal. But it isn’t on a street of restaurants: there’s a laundromat nearby, and the inevitable Price Chopper.

Inside you’ll see first of all the old, long bar, a big mahogany affair installed around the turn of the century by a local brewery. Beyond it, the dining room, its walls lined with dark wainscotting that meets, halfway up, the cream-colored tin that also covers the ceiling.

There’s the look of an old saloon about it: appropriate to a place that once served the men who ruled Albany. About four years ago the building was bought by partners Linda Leyden-Bernal and Ken Linden, who turned it into a top-notch restaurant – something Albany always canuse – that, despite favorable reviews from as far away as Manhattan, still could attract a few more clients.

Having visited the place about a year and a half ago, I decided to check in again and see how they’ve weathered to vicissitudes of this mercurial business. The happy report: it’s as good as it ever was.

You’re greeted, most often, by Linda, who will seat you at one of the 14 tables; you get a handwritten menu and ditto wine-list, the latter offering hand-picked selections of the best from here and abroad.

The fanaticism that pairs wine with food under a scrutiny that would make a Mike Wallace nervous can become an end unto itself; if you’re in the mood for a red, as I was, go for it and do what you can with the menu.

A pinot noir from California’s Mark West vineyard was a warming drink on a chilly night, and a sip of it made the pasta special seem all the more desirable: pasta putanesca, I was told quietly, made with fresh linguine and toped with tomatoes, mushrooms, oil-soaked olives and seasonings.

To start, the soup of the day, beef barley, an old favorite that is given new life by the Yates Street kitchen. The stock was gorgeous, and would have made a wonderful consomme were that broth more in fashion; as it was, it provided a silky bath for mushrooms and grain.

For you? How about the grilled shrimp – two of them, very large, a touch of horseradish to spice them as they’re grilled over wood, the sharp seasoning of bacon adding the finishing touch.

Caesar salad is served individually; order for two and you still get individual plates from the kitchen, no doubt a relief to the floor staff that otherwise would have the underappreciated job of preparing it in front of the customers. Garlic abounds, but I’m sure you don’t mind. Why go out to eat if you’re afraid of the flavors?

The entrees feature one of each of the main meatstuffs America prefers, each prepared in some unique fashion. Veal, served as a chop on my last visit, is now offered as sauteed medallions, a generous helping of them that you’ll find as tender as cream cheese and finished with mushrooms and leeks. The sauce – and this is why you ordered the dish in the first place – begins as an excellent veal stock, reduced and thickened with crème fraîche.

On the side were roasted new potatoes, glistening with butter, and a simple ratatouille, the classic combo of peppers, eggplant and Italian marrow (zucchini), with a sprinkling of tomatoes and herbs.

My pasta has the resilience only fresh fettucine displays, with the zing of those olives making the mixture much more complex and interesting than a common tomato-sauce topping would provide. The tomato is there, little chunks of fresh stuff redolent of oregano, in a meal that is complete unto itself and really quite a nice companion to the sturdy wine.

One of the best serving staffs I’ve seen works the floor here, working with one another to make sure that every table is attended. Nothing is rushed, the food arrives hot; you never lack silverware, your wine is poured; the only departure from classic French service lies in the fact that the food is plated in the kitchen (which is fine), and the servers have a tendency to clear on their arms instead of using trays (which is not).

It’s nice to find a selection of tea; I’m settling for a cup of Bergamot-scented Earl Grey for my dessert. As for you, you have your choice: white chocolate mousse with raspberry sauce? lemon curd with cream? no-flour chocolate cake...?

Dinner for two, with tax, tip and beverage, was $76. METROLAND restaurant reviews are based on one unannounced visit; your experiences may differ.