ARTURO TOSCANINI WAS BORN IN 1867, and this sesquicentennial year has been marked by events that include a significant new biography by Harvey Sachs, a number of reissues of Toscanini recordings, and a tribute by conductor Steven Richman and the Harmonie Ensemble/New York. 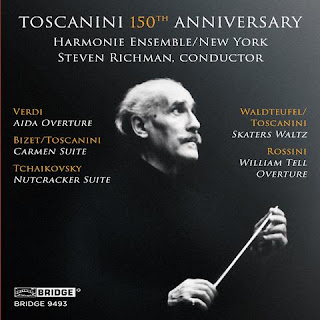 Given Toscanini’s significant reputation on the podium – and its recorded evidence – this was a rather brazen action. Richman has his own praiseworthy recording legacy, with repertory ranging from Gershwin and Grofé to Stravinsky and Copland; “Toscanini 150th Anniversary” (Bridge Records) features some of Toscanini’s less-frequently programmed works, all of them in the pops-concert realm.

The point of it is not to re-create Toscanini performances, and there really is no need to compare. Richman and the Harmonie Ensemble do excellent work here. And the game of comparison is throttled from the start, because the disc starts off with Verdi’s “Aida” overture, which isn’t what you typically hear in front of that opera. As Sachs’s liner notes point out, Verdi discarded this overture in favor of the originally written prelude that endures as the opening, but Toscanini was able to recreate this unpublished work from memory for a single performance – 14 years after a study session of a score lent by Verdi’s heirs. Not surprisingly, it’s a stirring work, and I can’t help but think of Toscanini as I hear the forceful attacks and exciting dynamic contrasts Richman achieves. So much for not comparing!

Although Toscanini wasn’t as score-intrusive as Stokowski, he wasn’t above adding his own touches here and there. The “Carmen” suite on this disc is Toscanini’s own arrangement of components from the opera, reordering the sequence of the more familiar Guiraud-arranged suite, and adding a Toscanini-composed harp cadenza. Interestingly, the Richman performance times out to within seconds of Toscanini’s recordings of the piece. So much for ... 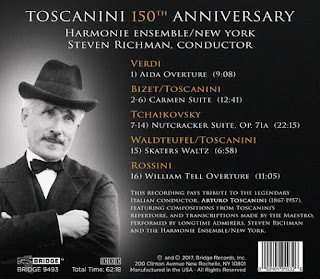 The longest work on this disc is Tchaikovsky’s “Nutcracker” suite, a work to which Toscanini returned frequently (while ignoring the composer’s fourth and fifth symphonies). Richman and the orchestra adopt a lean, flexible approach that honors the Maestro by never wallowing in over-sentimentality. And it’s a piece that has been so overexposed, especially at year’s end, that I’ve avoided it for a long time – so it was a treat to come back to it now and discover how enjoyable it remains, especially in a performance as crisp as this one.

Waldteufel’s “Skaters Waltz” is – or was – another hoary old warhorse. But we no longer live in a culture that promotes anything but the most profitable music. Toscanini took what was a small-ensemble piece and enlarged it into something more substantial, although he only performed it in concert twice. Inclusion here is an appropriate tribute to his orchestration skill.

And then there’s the “William Tell” overture, Rossini’s bid to give cartoons and early movies a full range emotional color, from mourning to thunderstorm to dawn to a rousing march. Like a “Hamlet” monologue, it has to be performed with no sense of all that past hanging over it, and Richman and company keep it fresh. It rounds out a superb CD that keeps this needed tribute varied, and keeps the great conductor’s name alive.