IT’S BRUTALLY COLD TODAY, with a wind that crisps the edges of the cold air and chases it up your trousers. I’m in a coffeeshop – a food co-op, actually – working in the pleasant coffee-consumption area even as my ankles grow numb. The front doors are whistling. When customers enter, they’re hunched and red-faced, gripping their collars. A light snowfall blows at a forty-five degree angle. 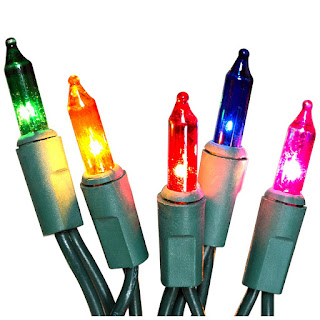 Such weather works alongside the commercial pressures of holiday ads and music to never let us forget that Christmas approaches. There may have been a time when this holiday offered a pleasant distraction from the weather’s changes; now it seems to be an additional burden.

I recently acquired a $20 laser gadget that shines a merry dance of green and red pinpoint lights against whatever you wish to thus illuminate. Having long wished to drape Christmas lights over a large pine tree that adjoins my house, but lacking the resources to bring in a cherry-picker to facilitate the task, I aimed the gadget at the tree and was rewarded with a light show somewhat approaching the result I desired. It delights my wife. Can’t ask for more.

We were studying it from the house last night, after we’d doused all the lights en route to bed. “Remember how we used to stand outside to admire the lights on the tree in here?” she said. “I like it better this year.” This way, meaning that once again we won’t be wrestling a tree into the house and fighting with the cats to get it decorated.

It’s one more step in our slow march away from Christmas’s hortatory grip. Our first one together was a cornucopia of gifts in a mad need to impress each other – enough of an excess that we ordered each other to return things. We had the usual lists of friends and family members to buy for, a list that, fortunately, eroded as we acknowledged that it really was the thought that counts, that gifts were excessive, that a Christmas card would do. And then, as both my Christmas card list and postage rates increased, we would hit December unable to afford them.

A situation aggravated by the arrival of a child. I wanted from the outset to protect her from three major holiday evils: the excess of consumerism, anything to do with Disney, and the lie of Santa Claus. The last-named is described in more depth here, while the Disney scourge demanded that I ward off a flood of well-meaning gifts before they crossed the threshold – but even with that, our daughter would be exposed to it elsewhere and my task soon became a running attack on the Disney anti-woman ethos.

But the presents ... even I succumbed to the temptation to buy my daughter’s affection, and we have a succession of ever-briefer videos documenting the rending of wrapping and cries of delight. Thankfully, that petered out as she aged into double digits. In fact, I note that the video recording of Lily’s life went from near-constant to what now seems to be an afterthought. In time, I suppose, the selfie will render all secondary camera operators useless.

The wind scuffs the sidewalks outside, ruffling the wreaths on display and hurrying on into the shop through large and leaky doors. Gloversville is not a prosperous city, to put it mildly, and what would have been a crowded Main Street a half-century ago now stares back through empty store windows. But the sky is easing into darkness, and even as the wind grows colder, lights begin to appear. Lights along the brief walk I take from shop to car, lights streetside and dripping from houses, and there, by my driveway, those unexpectedly delightful laserpoints dancing all over my tree.