From the Slush Pile Dept.: As far as I can remember, this piece never ran in Metroland, for which I wrote it in 1996, prompted by a then-notorious incident on the floor of the House of Representatives. Gerald Solomon served another three years before retiring.

IF YOU’RE PLANNING TO READ a meter or deliver flowers in the greater Queensbury area, knock with a firm hand and identify yourself quickly. Otherwise, Mrs. Solomon might blow you away with an AK-47. 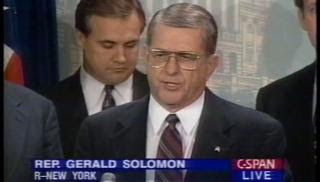 Rep. Jerry “Make My Day” Solomon once again proved that nothing beats paranoia to grab headlines in the political arena. Bickering on the house floor with Rhode Island rep Patrick Kennedy, the ex-marine pointed out that his wife “lives alone five days a week in a rural area in upstate New York. She has a right to defend herself when I’m not there, son.”

Despite the Senator Claghorn-esque syntax, Solomon’s point can’t be brushed away lightly. He probably believes what he’s saying, his point of view stoked by the $3.5 million worth of political support given to Republicans by the National Rifle Association. To listen to the NRA hotheads – next to whom Jeff Foxworthy sounds like a rampaging intellectual – your every step is dogged by miscreants who restrain themselves from robbing and raping you only because of all those well-armed NRA-ites waiting to rush to your defense.

As it happens, I, too, live in a rural area of upstate New York, and I’m the stay-at-home. Even though my spouse returns from her job each day to protect me, there are long, vulnerable hours here by my lonesome. And the street seethes with activity! Over the course of a given week, I’ll be visited by itinerant insurance sellers, Jehovah’s Witnesses, a guy who wants to paint my barns, some kids selling those costly fund-raising candy bars, the local pastor, and a neighbor or two who want to hang out and chat for a bit.

“Did you hear what happened to old Gilbert?” one of them said a while back. “Stopped by to see him – you know, he’s 83 now! – and he’d run out of firewood. Too proud to ask for help, you know, but I got together Tom and some of the other boys and we cut him up a couple of cords. Put some food in that house of his, too. Hasn’t been the same since his wife died.”

Of course, they were checking up on me, too, just as I, by phone or visit, have my own collection of neighbors to check up on. We don’t have an official club, like the NRA, because what we’re doing is a natural outgrowth of living in a community. You see it more clearly in a rural area because people are still bound by a common interest in the land as a food provider. Spend part of your day nurturing seedlings or putting up beans, and you’re not inclined to open fire on visitors. I don’t think there’s a National Tomato-Growers Association (at least, I haven’t been invited to join), but I know I can take a blighted tomato to my neighbor Lee, who’s been at this a lot longer, and get a good diagnosis of the problem. If gun ownership – and I’m talking about any kind of gun – were as necessary as its adherents declare, there’d be no need for a lobbying group.

Not that my area is free of guns. There’s a religious sect called Hunters out here, who at various times during the year spread through the woods to slaughter animals, inevitably thinning their own population as well. I asked one of my neighbors if his forays would be improved by using an Uzi. He considered the resulting carnage for a moment with a bloodthirsty gleam, but even he had to admit that it would “take the fun out of it.”

Old Gilbert didn’t have an assault rifle with which to defend himself against the onslaught of woodchoppers. He does have a yappy wire-haired terrier, though, serving as an early warning system when there’s that crunch of tires on driveway gravel. After that, there’s the 911 system, put into this area to make it easy as possible to get emergency services.

One day last summer we had an intruder on our property, and, gunless, understood how vulnerable that can make you feel. A tremendous racoon, staggering drunkenly and foaming at the mouth, emerged from one of the barns and approached my wife. She was so terrified that she later broke out in hives, but as she fled from the beast she had the presence of mind to dial 911 and get a State Police trooper out to the farm. The raccoon was summarily dispatched.

Which showed us a combination of state and county systems working for our protection, taking care of an issue we took outside the community. Solomon is in effect telling us that community and governmental systems – of which he’s a member – are not adequate to protect him and his family. Listen to the NRA (or watch the nightly TV news, for that matter), and you’re likely to hide in a darkened living room, clutching a sidearm. You have to be an active member of a community in order to enjoy its benefits. Smell the coffee, Jerry – and share a cup with a neighbor or two.