From the CD Vault Dept.: Here’s my review of a pleasant recording by Gidon Kremer that, as far as I can recall, never ran. So here’s some light of day for it.

COUNT ON VIOLINIST Gidon Kremer to find a unique theme for a recording. Sure, Nadia Salerno-Sonnenberg saluted the movie “Humoresque” on a recent CD, but Kremer manages to fit a virtuoso recital, great music and new works onto a disc that celebrates a fascinating range of movie-related material. 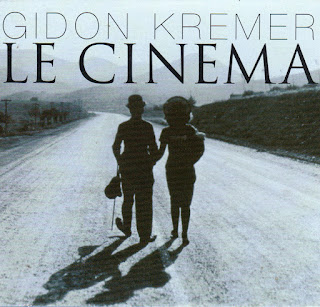 So the mushy, heartwarming “Smile,” written by Charlie Chaplin for the film “Modern Times” jolts into Nino Rota’s more abrasive “Improvviso,” non-film music by Fellini’s favorite composer. Not surprisingly for a Kremer recording there are works by Piazzolla and Shostakovich, but you’ll also find an arrangement of music by Isaak Dunayevsky, the leading Russian film composer of the ‘30s, and Takemitsu’s “Nostalghia,” from the Tarkovsky film.

Giya Kancheli wrote “Ragtime” for a production of “Richard III,” but adapted it for the violinist and renamed it “Rag-GIDON-time,” a bouncy little gem.

Milhaud’s well-known “Le boeuf sur le toit” was written, according to the composer, to accompany a Chaplin film. Milhaud also arranged a lesser-known violin solo version that Kremer has long championed, and has recorded with orchestral accompaniment, but the violin and piano version presented here makes it much easier to hear the solo part’s technically dazzling twists and turns.

It’s a pleasant mixture of sounds and styles, with pianist Oleg Maisenberg or the Deutsches Symphonie-Orchester Berlin accompanying the violinist. It certainly duplicates little of what you’re likely to have in terms of violin showpieces, and works a very convincing magic as a compelling, evocative series of 20th-century works.