From the Tech Vault Dept.: I tried to avoid computer games, figuring that my time was too ... but wait! Along came “Doom” and “Duke Nukem,” and I got hooked. For a while. Long enough to pen this review of yet another game, a piece that ran (minus my original lede, given here) in Computer Shopper magazine in early 1993.

COMPUTER WIZARDRY MEANS ADOLESCENT SUFFERING. But, as the movie “Revenge of the Nerds” suggested, that lanky Poindexter with the tape on his specs is nevertheless a randy guy who can think his way through problems that leave the hunky halfbacks scratching their heads. 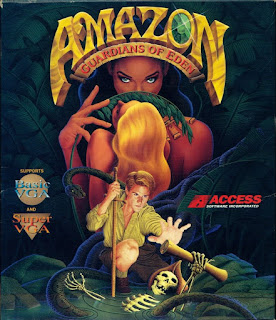 Like it or not, the heritage of computer-adventure games sprang from the imaginations of those feverish boys who spent too much time alone in poorly-lighted rooms. We roamed through labyrinthine castles, crossed galaxies, and rescued a maiden or two, with crafty intelligence taking the place of the brute force of handsome movie heroes. Where else can the undersocialized go to vicariously triumph?

Access Software, known already for games with great graphics and interactive challenges, tops all previous efforts with “Amazon: Guardians of Eden.” The game has three out-of-the-box hooks: political correctness, as it reminds us that the Amazon forests need protection; an old-movie design, which turns us into characters from a 1957 cliff-hanger serial; and Super VGA support.

And each of those advantages reveals a drawback or two. Taking them in reverse order, the Super VGA mode shrinks the activity screen to a quarter of its normal size, while providing instant access to all the goodies you accumulate in an adjacent inventory screen. The old-movie idea, while clever, is itself an anachronism – 1957 was television time. And the political correctness inevitably gives way to a procession of busty babes who menace, then laud, the conquering hero.

Oh, and the box tells a fib. Yes, there’s an online help window with (let’s trust them) over 600 hints. But you can’t, despite the airy promise, use them at any point during the game. We’ll get back to this in a moment.

Music and dialogue accompany you on your journey, assuming you have compatible hardware. It’s the usual scavenger-hunt challenge of finding the right tools in each of many, many screens, and you must be resourceful enough to know how to combine your tolls and time your actions. Save your game as often as you like; you’re sure to have to go back once or twice--never mind the fatal slips that await you.

The story itself has all the probability of a Crash Corrigan adventure, which is part of its charm. Don’t study the script as a whole – just master each challenging chapter.

Although it may be revealing too much to tell you about this, there are actually two endings to the game. The hero’s finish no doubt welcomes the player into the arms of Maya, the mysterious Amazon woman who befriends him halfway through the game, and, what with the bevy of gorgeous (and bi-mammetted) Amazons standing around at the conclusion, it could even get rather orgiastic. 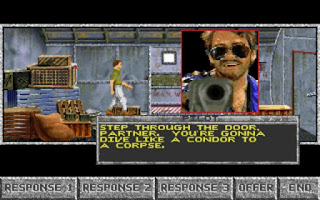 But I can’t attest to that. I asked for help much too often. And, as you continue to consult the hints window, your intelligence quotient is impugned. A generously high number sinks into double digits, eventually zeroing out and denying you access to any more advice.

When this happens, you get the moron’s finish. Sure, you’ve rescued Maya and slain her oppressors, but she’s looking for brains, you see. Not a guy who keeps begging for help. And so you’re tossed, ignobly, back to the C:> prompt. This is a game that could be subtitled “Revenge of the Help Menu.”

Sensitive fellows, beware. Maya is unsympathetic. But if you’re up for an engaging adventure with impressive sounds and displays, plug in your speakers, limber up that mouse, and prepare for a rollicking adventure. Amazon will challenge and entertain you. No questions asked.

Conclusion: A dazzling-looking, interactive adventure game that harkens to the old- movie serials with a campy (if sexist) story and lots of sound and animation.