From Moscow, with Love

VAN CLIBURN ROCKETED TO FAME on the back of Sputnik, metaphorically, when he won the first International Tchaikovsky Piano Competition in Moscow in 1958. Russia’s launch of the satellite the year before gave the Cold War a boost, adding a fresh layer of paranoia as the Communist orb orbited. 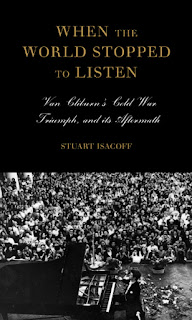 The Tchaikovsky Competition was intended to be a world-class event that would crown a Russian virtuoso and thus assert Soviet superiority in yet another realm. But the 23-year-old Cliburn, already making waves on the music scene, proved so irresistible a soloist that judges like Emil Gilels and Sviatoslav Richter, themselves renowned Russian virtuosi, insisted that the young Texan should take first place.

Not surprisingly, it caused an international sensation, putting Cliburn on the cover of Time and pitting classical music against political brinksmanship. This moment in history, which plausibly can be viewed as the first step towards the Soviet Union’s eventual dissolution, is examined in Stuart Isacoff’s new book When the World Stopped to Listen (Knopf, $27.95), which charts an intricate process in which the gifted pianist landed in the perfect place to put his talent to work for the good of mankind – even though the repercussions he suffered eventually cost him his career.

It’s an apt title. Cliburn’s subsequent recording of the Tchaikovsky Piano Concerto No. 1, one of his competition-winning choices, quickly outsold every other classical recording and was the first in that category to sell a million copies. We meet the pianist as a youngster growing up in Texas, learning the instrument from his mother (to whom he was obsessively devoted), herself a student of a student of Liszt.

Isacoff weaves a compelling narrative, following Cliburn to Juilliard, where the youngster inveigled his way into Rosina Lhévinne’s classes, thus allying himself to a Russian performance tradition – a pedigree noticed by the Moscow competition judges – before veering to the political end of things with the Sputnik launch.

It put Soviet premier Nikita Khrushchev on the cover of Time as 1957's “Man of the Year,” and gave rise to a Sputnik-themed merchandise industry, all to the great distress of American scientists and politicians. As the space race heated up, so too did plans for the Tchaikovsky competition, which was “a propagandist’s dream,” writes Isacoff. “Still basking in its scientific glory in the space race, the USSR would now be propelled to impressive artistic heights as it assumed the mantle of arbiter of musical greatness.”

Music already had become a propaganda tool, with Truman and Stalin summoning performers to the 1945 Potsdam Conference, and, a decade later, with visits to American by Gilels, violinist David Oistrakh, and cellist Mstislav Rostropovich, those visits reciprocated by the dispatch of tenor Jan Peerce and violinist Isaac Stern to perform in Russia. But, as Isacoff’s narrative skillfully shows, such exchanges now can be seen as the groundwork for the debut of this brand-new competition. Although the book nominally follows Cliburn’s trajectory, the journeys of his fellow finalists also are traced, particularly those of Russian pianist Lev Vlassenko, who had seemed a shoo-in for the gold medal, and Chinese pianist Liu Shikun, who won second place but faced persecution in his home country.

But most of the story takes us alongside Cliburn as he dazzles everyone he meets with charm and his extraordinary talent. We know the outcome of the competition – it’s why we picked up this book – but it’s still a bit of a nail-biter as the politics of the moment seep into all aspects except, as it turns out, some islands of personal integrity. Even with the unanimity of the judges’ opinions, Khrushchev had to be consulted. And Khrushchev approved. “If there were any political calculations behind the decision to allow Van to win,” notes Isacoff, “they were indeed paying off. Almost immediately, the frigid relations with America began to melt at a swifter pace.”

President Eisenhower didn’t pretend to be a classical-music fan. When, after Cliburn’s return from the Moscow triumph, the pianist met Eisenhower, “The president and his wife opted to skip his concert that evening. The only people in Washington who thought to celebrate his arrival with the proper amount of fanfare, noted The Washington Post, were members of the Soviet embassy, who hosted a dinner in his honor.” A year later, Khrushchev was invited to the White House and Cliburn was not.

But Cliburn was on a rocket of his own, performing a relentless schedule across the United States, with his two big competition winners – the Tchaikovsky concerto and Rachmaninoff’s Concerto No. 3 – his program mainstays, and often presented on the same program. He proved, after a while to be a mercurial performer. He often was late for his concerts, and the nerves he hid for many years eventually got the better of him. He drew criticism for staying within a narrow choice of repertory, and then drew further criticism for his often over-dramatic re-thinkings of those works.

Cliburn founded his own piano competition, which bears his name and continues to this day as one of the most prestigious, but he took a Horowitz-like hiatus in the mid-1970s, coming back a decade later to a far more tentative schedule. All in all, it’s a success story, but one that reveals depressing limitations. Cliburn’s success was well-earned; that his career should have foundered as it did was mostly a matter of personal demons. The political success, if we can call it that, of the competition was a huge surprise, but one through which diplomacy had to struggle to be discerned, and which vanished quickly.

Isacoff is himself a pianist, and his writing, excellent in itself, is informed with a confident knowledge of music combined with the ability to speak in layman’s terms. And he has achieved the notable success of writing what’s both an important musical biography and compelling historical saga.