The Music of the Maid

From the Slush Pile Dept.: Some pieces get lost in the pipeline. Here’s one I wrote for Metroland towards the end of 2012 but which never ran, although I included the CD set described below in my year-end Best Classical CDs roundup that year, and it continues to be a delight to revisit. 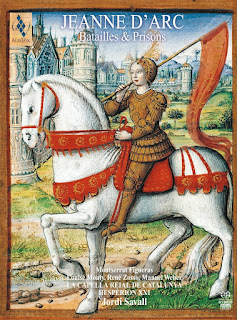 HAVING HIT ON THE PROFITABLE MODEL of presenting a single-themed, multi-CD set in attractive book form, tireless musicologist and conductor Jordi Savall continues to top himself with the often-arcane subject he’s able to cover in each successive release. On the heels of Mare Nostrum (“Our Sea”), itself a richly varied musical exploration of disparate Mediterranean voices comes his eighth such set, a tribute to the music of the time and place of Joan of Arc.

Unlike its predecessors, this program, spread across two CDs, follows a single narrative: in this case, the story of Joan’s visions, political activity and martyrdom, drawing from contemporaneous texts performed by a trio of actors interspersed (or overlapping) with the brilliantly realized music.

We follow Joan the Maid from her birth through the battle at Orléans (1429) and her trial and execution (1431), all of which took place before she was 20. The program then takes us through the finish of the Hundred Years War in 1453 and Joan’s “rehabilitation” three years later with a vigorous anti-English finale.

The presentation begins, appropriately, with a piece (“Ballade de la Pucelle”)  fashioned after the 15th-century pop song L’Homme armé, a source for many composers of the time, including Guillaume Dufay, who wove it into a Mass – excerpts of which accompany the depiction, at the end of disc one, of the coronation of Charles VII.

Several manifestations of this theme were realized by Savall, who also linked many of the sections with other original works indistinguishably in keeping with the style and spirit of the project. Other period composers represented here include Josquin Desprez, Johannes Vincenet and Johannes Cornago – and much is credited to anonymous sources.

This is one of the last projects by soprano Montserrat Figueras, who sounded wonderful to the end. She’s joined by soprano Maria Cristina Kiehr and countertenor Kai Wessel in the program’s solo-voice numbers, as well as the sublime trio “Veni Sancte spiritus” by Dufay, representing the voices heard by the 13-year-old Joan.

La Capelle Reial de Catalunya is a vocal ensemble of eight or 14, depending on the piece, used to affecting effect in such pieces as a parody (in the classical sense) Te Deum realized by Savall.

Audio-only acting grows tedious if the talent doesn’t appreciate the challenge of creatively shading voice alone. I’m only marginally familiar with French, which adds the risk that what I hear could end up, if it’s not done well, sounding like a mockery of the language’s built-in music. Fortunately, Louise Moaty’s work as Joan is subtle and compelling, while René Zosso and Manuel Weber trade off the many other roles with ease. By the time we reach Joan’s fatal confrontation with her accuser, Pierre Cauchon, the drama has grown deeply involving.

Be prepared for a lot of narrative, some of it underscored, some bookended the musical events. As is characteristic of all such Savall surveys, it serves a moment in history by deepening our knowledge of the best-reckoned sound of the events.

This is actually a follow-up to Savall’s work on director Jacques Rivette’s 1994 pair of Jeanne la Pucelle movies: Les batailles and Les prisons, and some of the recorded material on this CD set is drawn from those many years ago, with no noticeable difference. If anything, it’s pleasing to hear Savall’s completion of his end of the project.

As is usual with this series, the CDs are housed in a 500-page, multi-language hardcover book. The text is thorough in terms both of history and music, with English translations of the spoken (and sung) material. But I suspect that, by the time you reach the end of it, you’ll be pretty pissed off at English. I was, and I hardly agree with Joan’s crazy antics. That’s the persuasive power of this music drama.