Churrasco: At Your Service

YOU WILL HAVE SPENT THE DAY working hard – herding cattle, perhaps – and you’ll come to the table feeling ravenous. Even then, dinner will unfold like a dream, with an endless series of servers stopping at your table to slice a succession of succulent meats. More filet mignon? Here you go. Parmesan-crusted pork loin? Don’t mind if I do. Leg of lamb? Sausage? It keeps on arriving for as long as you signal your readiness to keep on eating.

This is a churrascaria, a type of restaurant that originated in Brazil, with tableside carving from skewers (rodizio) of a slow-cooked variety of meatstuffs (churrasco). Add to that an imaginative, well-tended salad bar that includes soup, plenty of vegetables, and Brazilian antipasti, and you’re in as good a buffet situation as you’re likely to find. Texas de Brazil is an international chain of more than 40 such eateries, with an Albany, NY, unit in Crossgates Mall not far from Lord & Taylor.

Evandro Caregnato, the chain’s culinary director, shares his personal history with the cuisine and over 70 recipes in his book Churrasco (Gibbs Smith), and he’s inviting you to cook these dishes at home, secure in the knowledge that you’ll still keep coming back to the restaurant.

That is, after all, where your expectations are set, and a recent visit to the Albany branch of Texas de Brazil set mine high. The restaurant sits on a corner space that offers the mall equivalent of patio dining. Inside is a bar area with a generous wine display; in the dining room’s center sprawls the rectangular salad bar, topped with a huge, colorful flower arrangement. It was an uncrowded Thursday evening, but the staff showed nothing but eagerness as were greeted and shown to our table, taking a route that allowed us to see the grilling area.

And then we met Ben. Charming, handsome, well-spoken, he presented himself as our culinary guide for the evening. He explained the workings of the restaurant’s system, encouraging us to sample the salad bar but save our appetites for the meat. Which he ascertained that I like medium-rare, while my wife struggles to tone her preferred degree of overdone-ness down to the dark side of medium. “I’ll make sure you’re offered both,” said Ben, despite my insistence that I’d make do with whatever Susan was served. “You want it medium-rare,” he reminded me. “You’re getting it medium-rare.” 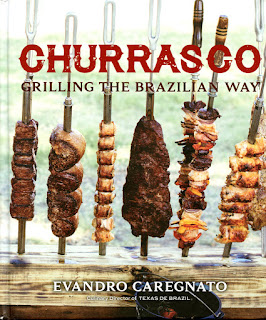 Rationing yourself isn’t easy at a salad bar like this. Asparagus – steamed but still crunchy, touched with a fruit sauce – gets in the way. As do the lobster bisque, the plates of shrimp and salmon, the sushi, the string beans, the couscous salad. And there are cheeses – mouth-filling chunks of Spanish manchego, a wheel of pungent Grana Padano – and salumi, including a Brazilian speck. The garlic mashed potatoes are brought to your table, but again Ben advised us to take it easy. “It’s only there to fill you up. You want the meat.”

Which meant it was time to signal the servers, easily done by flipping the coaster-sized ordering card that sits at every place from red to green.

They’d been circulating already, these gauchos, as they’re termed; now, with my table in their sights, they descended. But it’s a well-paced procession, one item at a time. Of course I wanted to try a sausage link. No way I’d refuse a bacon-wrapped chunk of chicken breast, and the lamp chops that followed were the most tender and delicious I’ve had in a long time. Even in my gustatory excitement, I worried that the beef had somehow been diverted, but no: here came the skewer of tenderloin and the skewer of rib meat, and they were excellent. Having had my nose in Caregnato’s book, however, I wanted picanha.

It’s the house specialty, which is all you need to term it when you’re requesting it, a cut that’s prized even more than the tenderloin and shell. It comes from the top sirloin and features a ridge of fat that flavors the trimmed portions as they cook. It’s sliced thin and melts in your mouth. Pair it with the house chimichurri and you may not want to eat anything else. “It is truly best,” writes Caregnato, “when prepared in a simple manner that reveals its naturally beefy flavor.” His book offers a couple of at-home recipes that come down to this: get the right cut of meat, trim it correctly, season it with salt, then expose it to hot charcoal or broiler rack. “This is not the type of meal that can be prepared or eaten quickly,” he notes, “so why not make it a big event?”

That’s the spirit of the restaurant; it’s also the spirit of this book, the recipes in which won’t always satisfy the deluded lunacy of our “30-minute gourmet” culture. “There is no formal education for churrasco,” Caregnato declares at the outset of the book. “These skills were passed down to me during childhood.” Of course, he augmented those skills considerably, which is reflected in the scope of the restaurant and the culinary breadth of this book

It has a section of Texas de Brazil favorites, giving recipes for the beef ribs, pork loin, lamb chops, lobster bisque, potato salad, fried bananas, and much more, but moving beyond that gets you recipes for the likes of fried beef empanadas, worth it just for the dough recipe alone; a chicken stew with creamy polenta or chicken drumstick fritters, and even an approach to roasting a whole fish or rendering codfish into fritters.

A sweet caramelized kabocha squash preparation reflects the abundance of sugar cane in his native land, but squash ravioli with a porcini mushroom sauce shows his more continental side. You’ll also find sweets like chocolate truffles towards the end of the book. And it’s all beautifully photographed by Denny Culbert.

My next project will be the roasted lamb, which is a way of cooking a whole split lamb marinated in beer by tying it onto a steel-cross spit that’s hammered into the ground in front of your outdoor fire. He’s quick to point out that it’s not the simplest way to cook this meat, “but you may want to try it for the experience or, like when I do it, to impress friends.” Exactly.

After that, I’ll be searching for a 55-gallon drum with which to construct my own churrasco grill, a project that requires patience and welding but, based on my experience at the restaurant, has become irresistible. As my wife and I neared the too-full point during our Texas de Brazil dinner, her plate proved that she’d sliced off more than she could chew. “Don’t clear it yet,” I said to Ben. “I’ll have her picanha slices.”

“I’m sorry,” said he. “I can’t let you do that. You’re here at the restaurant. You’re going to have it sliced off the skewer, so that it’s as delicious as it can be.” He proved inflexible, and he was right. But I’m still longing for more picanha. I have to build that grill.