From the Communal Table Dept.: It’s time to celebrate betrayal, death, resurrection, rabbits, and eggs, while one considers carefully what foodstuffs one might be consuming. Suppose you had certain knowledge that your next meal would be your last? I pondered that in this piece from three and a half years ago, written to celebrate the End of the World, according to a misguided interpretation of the Mayan calendar.

“Just coffee and a slice of toast, thank you. Oh, and perhaps a few grapes. I hate to disappoint the newspaper-reading public, but it'll be too early for the conventional hearty breakfast. The appointment is at 8, is it not?” – Louis D’Ascoyne Mazzini, "Kind Hearts and Coronets." 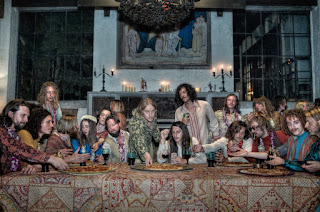 MAZZINI IS ABOUT TO BE HANGED FOR MURDER, and therefore chooses the meal with the confidence that it will be his last. Not many of us enjoy that privilege, succumbing to unexpected endings or wasting away to a point where the food choice probably courses through a tube.

But with the confidence that tomorrow (Friday) spells the end, you’re no doubt looking over menus and ingredients. It’s difficult to find precedent. Most of the last meals we know of come from death row, and range from the artistic simplicity of murderer Victor Feguer’s request for a single unpitted olive to murderer-rapist John Wayne Gacy’s banquet of a dozen fried shrimp, a bucket of original recipe KFC, a side of french fries and a pound of strawberries.

Not that you want to pig out too much. Texas-based white supremacist-murderer Lawrence Russell Brewer asked for two chicken-fried steaks, a triple-decker bacon-cheeseburger, a cheese omelet with ground beef and jalapeños, fried okra, a pound of barbecue with a slab of white bread, a pizza topped with pepperoni, ham, beef, bacon and sausage and, almost as an afterthought, three fajitas. As well as a pint of ice cream and a hunk of peanut-garnished peanut butter fudge. Then he decided he wasn’t hungry and ate none of it, pissing off Texas senator John Whitmire, who then helped abolish the state’s last meals program. Might as well save on the high cost of executions.

One of the most famous last suppers was served April 15, 1912, with no sense of lastness about it until the Titanic started to tilt. This was an era when a meal could go on for hours, and the repast in First Class began with oysters à la Russe and a choice of scallops-garnished consommé Olga or cream of barley before going on to poached salmon with mousseline sauce,  filet mignon, chicken Lyonnaise with vegetable-marrow farci, lamb with mint sauce, Calvados-glazed roast duck with apple sauce, roast beef sirloin forestière, Château potatoes, minted green pea timbales, creamed carrots, rice Parmentier and boiled new potatoes.

Intermezzo was a serving of punch Romaine, paving the way for the roast course, which was roasted squab on wilted watercress. A simple asparagus salad with champagne-saffron vinaigrette led to a cold course of pâté de foie gras before the sweets cart arrived, tempting the doomed diners with Waldorf pudding, peaches in chartreuse jelly, chocolate-painted éclairs, French vanilla ice cream, assorted fresh fruits and cheeses, coffee and cigars.

Celebrity deaths also immortalize final meals, so we know that when Elvis Presley checked out in 1977, he’d just had some ice cream and cookies, following up on a dinner of spaghetti and meatballs.

Not much in the way of indulgence, but who knew? With the Apocalypse practically upon us, excess probably is more the order of the day. Certainly the appeal of all the pizza and wings you can eat must rank high for many, and I know I wouldn’t turn up my nose at such a feast.

At the very least, you could make a night of it visiting a variety of fast-food windows, piling in the burgers and fries while trying to drive away without paying – but the cheap joints are a lot more fussy about that than white-linen establishments, where you get to eat before showing the color of your money. What might you choose in the fine-dining realm?

For her 2007 book My Last Supper (Bloomsbury), Melanie Dunea asked a number of celebrity chefs what they would prefer to eat with The End at hand. Not surprisingly, up to ten courses would figure in Mario Batali’s last meal, including marinated anchovies, mozzarella en carozza (grilled cheese, that is, but Neapolitan style) and fresh Amalfitana pasta with shrimp and zucchini. Lidia Bastianich prefers San Dianiele prosciutto with black figs, linguini with white clam sauce and grana padano cheese, finishing with ripe peaches.

Ferran Adrià, whose now-shuttered restaurant El Bulli was regarded by many as the world’s best, drew his inspiration from Kiccho Restaurant in Kyoto, Japan, for a meal including sashimi, shrimp, clams, seaweed soup and an array of Amazonian fruits. The irascible Gordon Ramsay, on the other hand, opted for roast beef with Yorkshire pudding and red wine gravy.

Food tends to be number two on the shortlist of things to do when it’s almost all over. For number one, you need company. I haven’t been invited to any local Doomsday parties, and might have to take myself to Manhattan, where such events are taking place tonight (Thursday) at Hudson Terrace on 46th St., and tomorrow at the Bowery Hotel (free specialty drinks! Apocalyptic artwork!), the Gansevoort Park Hotel (rooftop post-apocalyptic photo shoot with an army of models) and Beaumarchais, which also offers a Survival Brunch on Saturday.

Tragic as life can seem sometimes, I don’t have a strong sense of the walls closing in just yet. It would be hard to justify one of my own favorite but now rarely visited indulgences, which consists merely of a tub of ice cream and a spoon.

Unfortunately, that puts me in league with serial killer Timothy McVeigh, whose last meal consisted of two pints of mint-chocolate-chip.

I hadn’t the heart to share that fact with Rourke, one of the pleasant baristas at Albany’s Uncommon Grounds, where I wrote this piece. He, too, picked ice cream.

It was an easy choice for Rebecca, working beside him: a bagel with smoked salmon, which almost persuaded me to order just that then and there and hope for the worst. “I’d make myself some broiled salmon with a teriyaki marinade,” said Dan, who prepared for me the latte that fueled this piece. “And I’d have it with some fresh asparagus.”

Vince disagreed. “Indian buffet,” he said. “I’d go crazy. Unless I’m being executed. Then I’d make sure to eat something that created extra work for the executioner.”

And that’s the spirit that’s going to keep this civilization, unlike that of the Mayans, going at least for a few years longer.

BA - in our family (ok, mostly just me) any good but decadent food goes on what I call the terminal list. Upon diagnosis with a get-your-affairs-in-order malady, which foods go on the "all you can eat for as long as you can" list. For example, from that fateful day forward, Hollendais would be carried about in a nalgene water bottle. Etc.