From the Food Vault Dept.: I had to start somewhere, I guess, but the ignorance the review below reveals is staggering. And as noble as was my intent, the review didn’t help, and Sugi closed shortly after it ran – but reopened in Albany as Arita, on N. Allen St., in a space now occupied these past fifteen years by Pepper Jack’s. The chef of Arita went on to run Miki in Saratoga Springs for a few years; that, too, has closed.

“IS THIS YOUR FIRST TIME to order shabu shabu?” the waitress asked.

“Oh. Many people who are not used to shabu shabu don't like beef in seafood broth.” 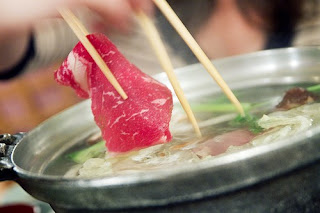 You can't intimidate me that way. Not even in a Japanese restaurant. Octopus, for example, looks gross on a plate. But sit me down beside someone who says yuck and you can bet I'll be smacking my lips over octopus.

The place: Sugi, a busy little restaurant the Schenectady side of the intersection of Route 7 and State Street. The time: a recent Saturday, early evening.

Dining rooms don’t get much less assuming. This is your basic paneling-with-drop-ceiling joint, but dressed with charming Japanese screens and fans to mask the plainness.

And there’s a sushi bar at the far end of the room to capture the eye, with a handful of chairs for the dedicated eaters of the raw fish delicacies.

The menu offers categories. Tempura, one of the better-known Japanese preparations, has its own column for different varieties of the deep-fried delicacies. There are broiled items, most of them with a teriyaki seasoning. Other entrees feature noodles. And, of course, the sushi and sashimi, both preparations of raw fish, the former wrapped around vinegared rice.

Susan and I started by splitting an order of sushi, four pieces that included two varieties of snapper (tai), a wrapped-in-skin portion of crab (kari) and a slice of prawn (ama ebi), with the traditional hot mustard and soy sauce served on the side.

My secret for the first-time sushi eater: eat it fast and enjoy the rice. I mean, the fish is wonderful--once you get used to it. But you do have to get used to it.

Soup was next. For her it was miso shiru, a soybean broth with tofu and scallions. Served in a sturdy, black two-piece bowl, it has a flavor that sneaks up on you and shakes your hand. We’re accustomed to bean soups thick and gooey, a symphony of soup; this is a soup sonata.

My suimono was a seafood broth, a bouillon, really, with a garnish of egg drop and a whole clam in an open shell. Again, coming from a cuisine where beef and chicken are the stock stock flavors, fish soup is a surprise. But a pleasant one.

While Susan worked on a small, highly vinegared salad, I was served a three-piece tempura appetizer. The art to these deep-fried veggies and seafood (I had a sweet potato slice, a carrot slice and a shrimp) is to make a batter that fries up light and dry. And it’s easy to forget that there’s even any oil involved when it comes out as light as Sugi’s.

Our entrees were both seafood-broth based. The aforementioned Shabu Shabu arrived in a large bowl with a generous pile of beef shavings on top. Also in the compote were cabbage and carrots and celery–lots of vegetables, and a soy-sauce sort of side dish to dredge the items through.

It’s a stew and it’s a soup–and it’s a meal in itself. Susan’s yosanabe featured fish where mine had meat: large hunks of lobster and crab and scallops and such, which she was quite unable to finish.

Both entrees were served with sides of starchy white rice.

We braved the whole meal with chopsticks, except where those strange shovel-like spoons were provided for the liquids. I believe a cuisine should be learned with its native accouterments; after all, there is a rhythm to eating with chopsticks that a fork and knife destroys.

The little restaurant filled to capacity as we finished our meal. They are careful about taking reservations and were forced to turn some walk-ins away, which is a good sign: a well-run restaurant doesn’t tax itself by getting greedy.

Service is swift, as brusque as it is efficient when the place is busy, but we were never left feeling neglected.

When you dine at Sugi’s, keep in mind that we’re not talking American bombast: this is delicate food served in a delicate place, for the patron who appreciates detail.

Dinner for two, with tax, tip and tea, was $44 (but we ate a lot). METROLAND restaurant reviews are based on one unannounced visit; your experiences may differ.