Drinking from the Hose

Current Offerings Dept.: Metroland asked its writers to limn a memory of a food of summer and a ditto song. I discovered that even as a child I could be annoyingly effete. 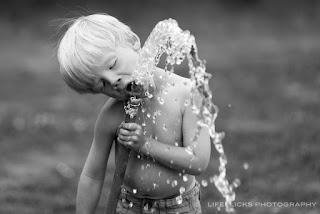 ONE SUMMER REFRESHMENT stands alone in capturing the season’s hot, stinky essence. Its source lies coiled on the lawn, softening under the heat of the sun. Spin the valve on top of the hose barb that juts from the side of the house and the length of green hose stiffens a bit, coughs expectantly, then spits out its treasure, a not-very-cool drink of water tasting of rubber and algae. Back when I first met this treat, the hose fitting was made of brass, which added its own crisp flavor. Holding the hose vertically turned it into a fountain into which you lowered your face while slaking your thirst, ignoring your sister’s complaint that she, too, wanted a drink, wouldja hand it over already. And so you did, but part of the game was to slide a thumb over the hose end, turning flow into spray and dousing her before dropping the hose and dashing around the side of the house.

When we think of summer from the vantage of spring, it looks like a bunch of green, pleasant weeks, warm and succulent. We forget about oppressive heat, nasty insects and a tendency to throw lightning bolts our way. My summer song therefore is actually a brink-of-summer piece, the Violin Concerto No. 1 by Camille Saint-Saëns. 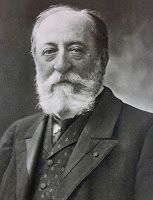 It wasn’t (to my knowledge) intended as such, but it conjoins a springlike merriment with bursts of summer surprise. A short snort from the orchestra summons five slashing violin chords, and then they’re off on a 12-minute romp that’s sunny and silly and with only a sprinkle or two to moisten its mood. Soon there’s a theme that sails up a triad and falls back again in tremulous bursts, sounding like one of those transitional days into a windows-open night. The piece never found a regular home in the concert hall, but you can find it on YouTube, and now’s the time of year to check it out. Having said which, the finest depiction of summer in ballad form is the song “Lazy Afternoon” by Jerome Moross and John Latouche, from their unheralded masterpiece The Golden Apple. Now we’re in the midst of a hot, sunny day, “And the beetle bugs are zoomin’/And the tulip trees are bloomin’/And there’s not another human in view/But us two.”