From the Bookshelf Dept.: And while we’re on the topic of books, here’s a revisit of my 2003 review of Bob Rosen’s Nowhere Man, a fascinating look at what became the last weeks of John Lennon’s life. It began life as an unpublished novel titled Rockjesus, had an unpublished incarnation in which diary entries were quoted – and settled into this entirely satisfactory form.

NOT LONG AGO, the Beatles put out a CD of their number-one hits and once again owned the Billboard list. Thanks to recently rediscovered tapes, more CDs are on the way. It’s safe to assume that they, too, will crown the charts. 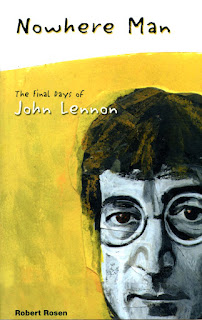 Interest in the foursome never wanes, collectively and individually, and among the individuals, John Lennon proved to be the most complex, enigmatic and, ultimately, tragic.

You have to decide for yourself whether Robert Rosen’s book accurately reproduces material from John Lennon’s diaries. Famous for their post-mortem peregrinations, the diaries were swiped by one of Lennon’s assistants and stashed in Rosen’s apartment. According to Rosen, he worked 16 hours a day, every day for over a month, “fueled by coffee and amphetamines,” to transcribe those diary entries. “I said them out loud like an incantation, and I began to feel what seemed to be like Lennon’s energy flowing through me.”

The listings were extensive – “every detail, every dream, every conversation, every morsel of food he put in his mouth ... and it was all an enormous contradiction. Here was a man who aspired to be like Jesus and Gandhi as much as he craved money and carnal pleasures.”

But the diaries and Rosen’s transcriptions were soon stolen back by that assistant, who’d been fired by Yoko Ono. Her investigation of those shenanigans suddenly threw Rosen into Ono’s brief employ.

Ultimately, Rosen wrote this account of the last years of Lennon’s life from memory and published sources. Although he once again reconstructed diary passages, he was legally barred from quoting them. As the author notes, it is a “confluence of information, imagination, and intuition,” which frees it to get closer to Lennon’s own inner workings than any other biographical account. Ironically, the book gained tremendous credibility in the wake of a court case last September in which Rosen was called to testify on Ono’s behalf.

Take Nowhere Man on Rosen’s terms and it succeeds admirably. He is a skilled writer whose format allows him to go behind a mere recitation of facts – he evokes Lennon’s complicated feelings, which come across as all the more human because of that complexity.

It’s a strange, compelling story, and we know from the start that it’s a tragedy. We follow the rich, befuddled rock star through months of seeming indolence and isolation until he emerges to record Double Fantasy and prove he was still at the top of his talent.

Living with his wife and son Sean in a spacious chunk of Manhattan’s Dakota Hotel, Lennon was, if not reclusive, at least in a state of siege-like retreat. We learn of his routines and his frustrations, always with glimpses of his own feelings about these things. In terms of food, for example, “barely a week went by when John didn’t fast or attempt to fast. Usually he’d begin a day-long fast, but by dinner time his willpower would break down and he’d gorge himself on junk food, stuffing into his mouth anything that happened to be in the refrigerator. Then he’d call himself a fool.”

Lennon’s relationship with his wife, Yoko Ono, was complex and, what with her reliance on the occult for decision guidance, sometimes ridiculous, but Rosen portrays it with enough detachment and detail to give it credibility. So we learn about numerology, astrology and the fact that she paid $60,000 to learn how to cast spells, and it all seems somehow plausible because of the effective context.

There’s also the relationship with Sean to consider, which becomes frustrating story of a man trying to offer his child a childhood without a sense of communion. Lennon’s last creative surge seems to have come about, among other reasons, to give his son a sense of the father, and this compelling detail emerges about a trip to Bermuda taken by the two:


One afternoon John took Sean to the Botanical Gardens. Everything was in bloom; it was beautiful. The gardens were meticulously kept, every plant labeled. They walked hand-in-hand, John pointing out the plants to Sean, reading the names: Angel Wings, Purple Imperator, White Excelsior. Then they came upon a flower from the freesia family. Double Fantasy, it was called. John, studying the sign closely, said the name out loud, and, delighted by the sound, he said it again. It was a good name ... an excellent name.

The creation of the Double Fantasy album is by itself a fascinating story, probably the best look we’ll get at Lennon’s creative process.

You can argue that Rosen gets too fanciful with the dialogue he gives to his characters, but that’s also one of the qualities that makes this a fascinating read. The current version of Nowhere Man is actually its second edition, vastly improved over the first. Layout and readability have improved, a few passages have been rewritten for clarification or with new information, and photos have been added. Rock star portraits tend to swing from hagiography to mudslinging; what makes this book valuable is the sense that Rosen is providing as honest a characterization as possible – honest enough so that, in spite of Lennon’s quirks and foibles, his genius ultimately shines through.

An unexpected blast from the past! Thanks for reposting.