The Funnier They Fall

SOME AUTOBIOGRAPHIES are delightful and brief. Some whiskeys are appealingly strong. Both are a product of distillation, and David Black’s autobiography, Falling Off Broadway, has been distilled to a rich, hilarious essence. Too unbelievable to be a novel, it’s the story of a man who pursued a career in opera even as he married this country’s most desirable deb, was recruited by the CIA, and then parlayed a salesman’s success into a lengthy career as a Broadway producer. 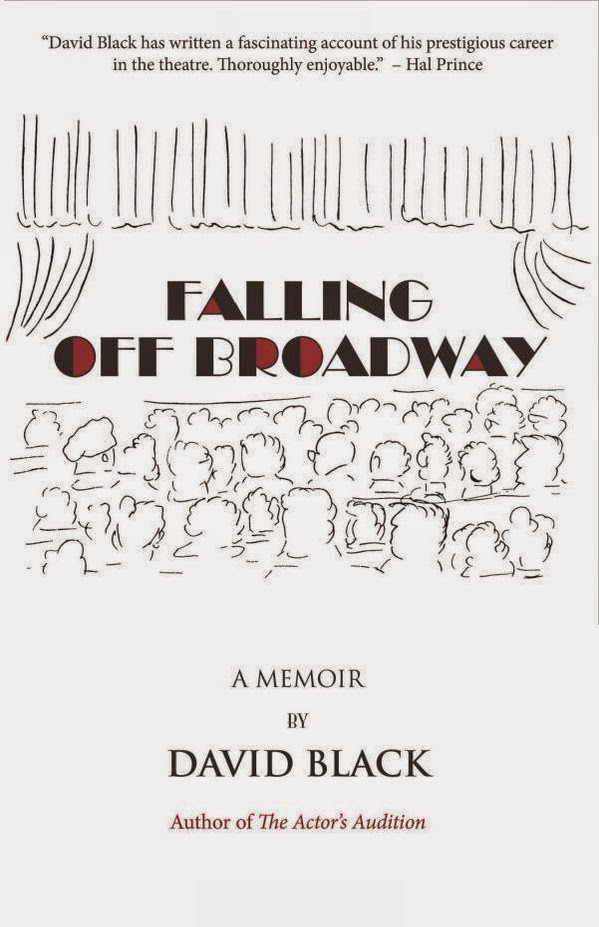 And anyone who’s able to go up against David Merrick and live to tell about it is a formidable soul indeed (just ask Stan Freberg).

Black is also a performer who has honed these stories in front of many an audience. The one-liners fall with practiced deftness. As a youngster, he writes, “I went to a camp where they meditated every day. I meditated about the girl sitting next to me.”

His father, Algernon Black, was a leader at the Society for Ethical Culture, railing against concepts of God so passionately in front of a group of such passionate followers that young David decided, “They must be here to worship my father! My father is God!” Which raises a very high bar in the pursuit of parental approval, and led the boy to court the opposite. Thus, while at Harvard he is fortunate enough to find a girlfriend who shares this agenda. She’s one of the Boston Cabots; he’s seen as an upstart Jew. Their rebellion takes them to Europe, where he studies opera while performing regularly on the Armed Forces Radio Network in Berlin.

The only significant lacuna in Black’s story is his CIA career, which commenced while he was overseas. The normally voluble author clams up on this one – too secret still? – but soon enough he’s back in the US and breaking into producing. It’s then a warts-and-all saga, and all the more entertaining for it.

He starts with an Off-Broadway musical about Evita Peron, for which he raises enough money without bothering to read the script. “After I read it, I gave the investors their money back. A well-known producer named Saint Subber heard that someone gave money back to investors. ... Subber needed $40,000 ... for a new play called Look, We’ve Come Through! ... (He) told me if I could raise the $40,000 in six weeks I would have my name next to his as the co-producer and a share of the profits.” Despite the presence in the cast of the still-unknown Burt Reynolds, the play flops. But because it closes quickly, some of the backers, including legendary impresario Sol Hurok, get a piece of their investment back. Hurok is so impressed that he offers to invest in anything Black should subsequently produce.

In other words, this part of his life is a fairy tale, filled with opportunities seized and missed and a parade of theater legends. Dame Margaret Webster, for example, hired to direct an adaptation of Henry James’s The Aspern Papers: “When I went to the airport to pick up Dame Margaret, I was excited. I expected her to speak in iambic pentameter in keeping with her status as Britain’s number-one Shakespearean director. In the limousine, she told me she had written a poem. Her agent was Peter Watt, and she knew that my agent was Peter Witt. ‘Peter Watt is a bit of a clot,’ said Dame Margaret, ‘but not such a shit as Peter Witt.’”

I don’t want to spoil any more of Black’s jokes, but let me point out that there’s a cast of recurring characters that also give life to the saga, including Manhattan’s cheapest therapist, an unusual alter-ego named Morton Zinsky, and inevitably, David Merrick, who proves more villainous even than Richard Nixon, who also puts in an appearance.

In the course of working with actors, Black set himself the challenge of learning what makes auditions and performances work. He describes an epiphany that occurred after an unsuccessful workshop he gave in order to pursue the subject. He went on to see a play performance, and “decided to continue my research by making note of the first moment I believed each actor and why. I made an exciting discovery: the first time I believed each actor was not when he was talking, but when he was listening to another actor.”

From this came more (and more successful workshops), and out of those came one of the performer’s bibles: Black’s The Actor’s Audition, published in 1990 and every bit as helpful today.

Before producing drove him nearly around the bend, he rediscovered a talent for drawing and has spent recent years in galleries instead of theaters – and part of his autobiography comes to us in pictures, as he explores the emotional bridge of that transition.

If The Actor’s Audition has helped people get into theater, Falling Off Broadway should remind them that there’s a way out. Meanwhile, especially through the eyes of someone like Black, it remains a terrifically entertaining place.

Falling Off Broadway by David Black
Mezzo Books, $16
Posted by B. A. Nilsson at 8:47 PM